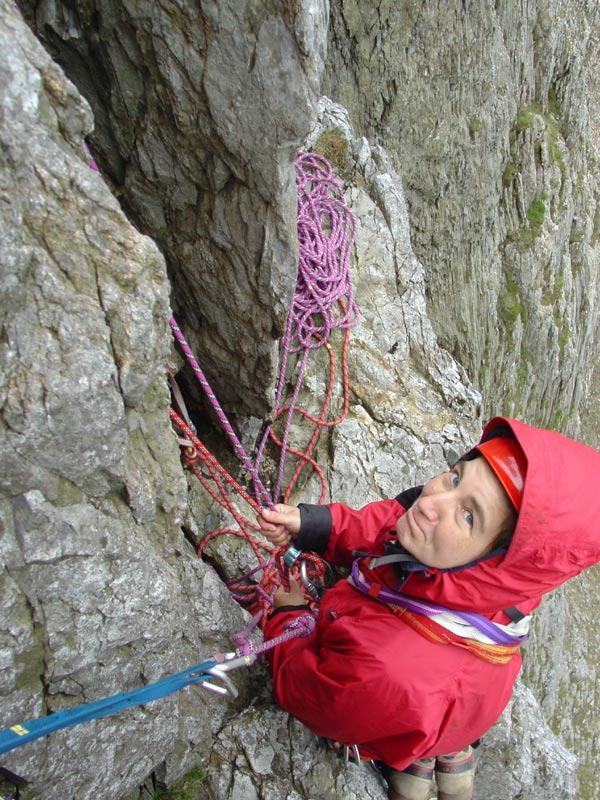 The weather was not as ordered and not at all seasonable, Saturday was cloudy and very cool and windy on the tops. Sunday was blessed with rain, heavy at times, accompanied with low cloud. However, the KMC and friends rose to the challenge and went:

Cnicht from Nant Gwynant. Due to a map reading error on the part of the leader we followed a quad bike route up the hill towards the ridge north of Cnicht. Thus we found ourselves well off route but closer to our objective. On the summit we were rewarded with a fine panoramic view stretching south to Cadair Idris and Porthmadog, east to Moel Hebog, and north to Snowdon, the Glyders and Moel Siabod. On our way back to the hut most of us stopped for drinks and a chat at the pub at Rhyd Ddu. - Iain, Derek, Frank, James, Jim, John, Kate, Lester, Lorna, Margaret, Virginia.

Snowdon from the hut via the Snowdon Ranger/ Rhyd Ddu path - Mark and Michelle. They enjoyed a grandstand view of the Snowdon International Mountain Race.

Some members camped to avoid the snores but were kept awake by the all night Rave Party in Llanberis - still going strong at 5am on Sunday morning.

On Saturday evening we had a birthday celebration for Bob, Derek and Iain. Twenty seven members and guests enjoyed a fine three course meal accompanied by beer, wine and soft drinks followed by birthday cake, prepared by Pam.

Thanks are due to Margaret whose red currants added the finishing touch to the melons, to Elaine for the brisket and to Pam who provided the ham, the birthday cake and organised the meal. Thanks are also due to the willing army of assistants.

A collection for the Llanberis Mountain Rescue Team organised by Michelle raised £70.