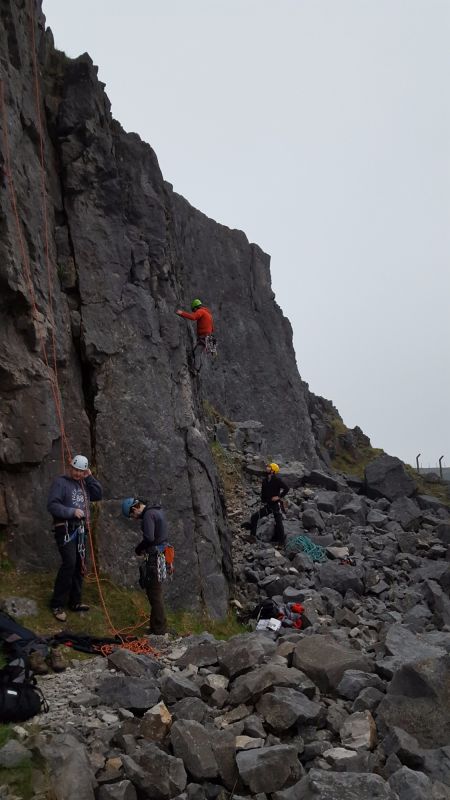 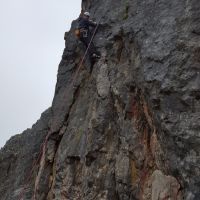 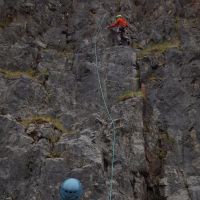 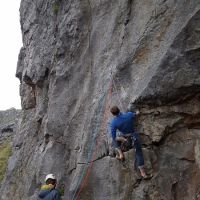 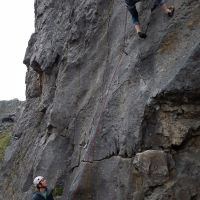 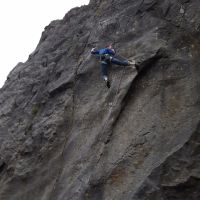 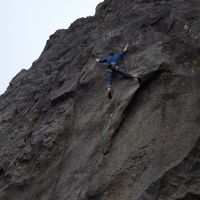 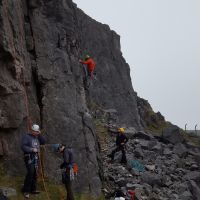 Having left the sun behind in Manchester the KMC arrived at Harpur Hill in a thick fog…  This definitely lent an air of the post-apocalyptic wasteland to the quarry, which is one of the few sport climbing venues in the Peak District.  No wind, misty air, damp underfoot conditions, a fluorescent green pond and numbers trails from the local off-road motorbike scene all served to increase the “Max-Max” feel of the place.

Rob and Andy arrived first and opened their account on the Lower Tier with an ascent of Geisha grooves (6a).  Andy followed muttering something about the crumbly nature of the rock (why else does he think that the “Tradderati" would have allowed it to be bolted in the first place)  He also grumbled about how he preferred much more solid gritstone and how no-one who proposed or voted for Harpur Hill had shown up and that the only reason he was there was because he quite likes the Kebab Shop next to the pub in Buxton.  He was roundly ignored by the rest of us!

Will and Dan led Outside Tokyo (6b) which was then cleaned by Rob following a slight miscalculation on rope length that resulted in Will having to top-out rather than lower off (first true ascent?).  Andy teamed up with Gowry, Duncan and George to climb Golden Goose (5a) after which the team migrated over to the Cairn sector.  Will managed to link the moves on Cairn (7a) with a couple of rests and then kindly left the rope in place for Dan and newcomer Tom to flounder briefly on the bottom three moves whilst he rested up for his red-point attempt.  His second attempt ended with some muddled footwork on the crux with Dan taking the catch.  After Dan led Great White (6a), an under-bolted route he described as “rubbish”, Will tried again but the tricky footwork at the crux foiled him again and they decided to call it a night.

Next-door Rob led Senile Delinquents, which gets 5c but by starting up the wrong line of bolts he actually ended up climbing most of Cabin Fever (6b).  George, Duncan and Gowry followed.  Andy by now had abandoned sport climbing and had sought out one of the few traditional offerings at the crag in Fed Flintstone (VS) seconded by George and Gowry.

As the darkness fell the KMC headed for the Old Sun Inn (Andy and George via the local take-away) and the survivors debated where to go next week.  The nominations were Castle Naze, Pule Hill and (again) Alderman.  After a tie in the first round, Castle Naze fell during the run-off, mainly due to the recent Hot-Pot climbing meet there.  That left Pule Hill and Alderman.  Alderman won, mainly due to effective whipping of the Chew Valley Caucus and much to the relief of your correspondent, who had nominated it pretty much every week so far this year.  Lets hope it lives up to the hype!