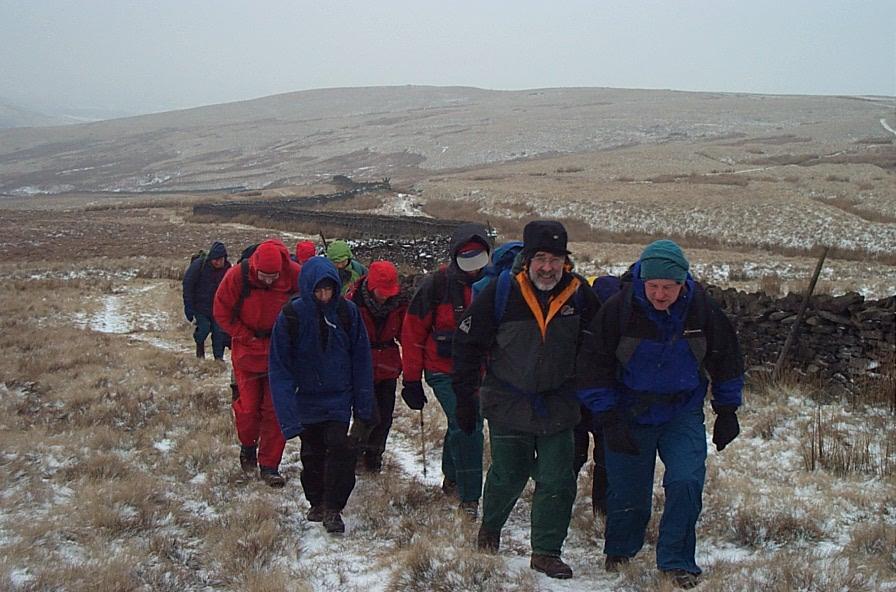 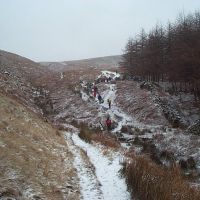 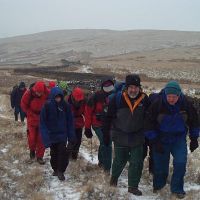 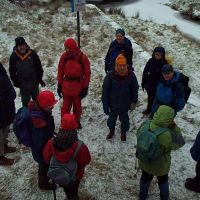 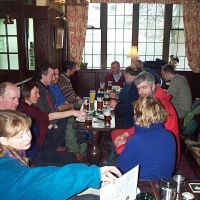 The weather forecast on Saturday and Sunday morning couldn't have been clearer - 'very heavy snowfalls' and 'atrocious driving conditions' followed by advice to 'stay at home' And to make matters worse, the snow would be 'followed by heavy rain'. What did the KMC do? Fifteen of them decided that as climbing was probably out, they would walk up Pendle Hill, and their virtue was rewarded with no snow or rain, just a dusting of snow already on the ground. However, you can't have everything and it turned out to be a 'real winters day', but at least the frozen ground meant no bogs!

A bitterly cold wind in the car park meant that the leader had great difficulty in preventing the assembled party from setting off before the appointed time - probably a first. A very pleasant mornings walk, concluded with a liquid lunch in front of an open fire in the Pendle Inn, where they were joined by Ian Dobson (age 14) who for some reason was unable to get out of bed before noon.

In the afternoon, poor visibility on top of Pendle Hill deprived the party of the promised views. However we knew all about navigating in the mist, and proceeded to demonstrate to our guests and prospective members, the time-honoured KMC technique - simply find a sheep track and follow it. Unfortunately the said sheep was not going to the car park and the party were rewarded with a 'sporting finish' after they walked off the wrong side of Pendle Hill - only 90 degrees out, which is well within the usual KMC margin of error. All have been enrolled on the forthcoming Navigation Course. However, for the sake of accuracy I must point out that Dave and Margaret were not in this party at this time the offence was committed, having opted for the alternative 'knackered knees' descent. Sue exempted herself from this latter group, on the grounds that (1) there was nothing left of her knees to save and (2) a restoration project was imminent. By chance rather than design, all sections of the party reunited to arrive at the car park just as the light faded.

A personal special thanks to Alan Wylie who very patiently got my car going in the dark and a bitterly cold icy wind, after the idiot owner had left it parked all day with the bonnet facing the icy wind until the engine compartment resembled an iced up trawler in the Artic.

Many thanks to everybody who managed to get well away from the crowds by ignoring the weather forecast and turned out for a great days winter walking.