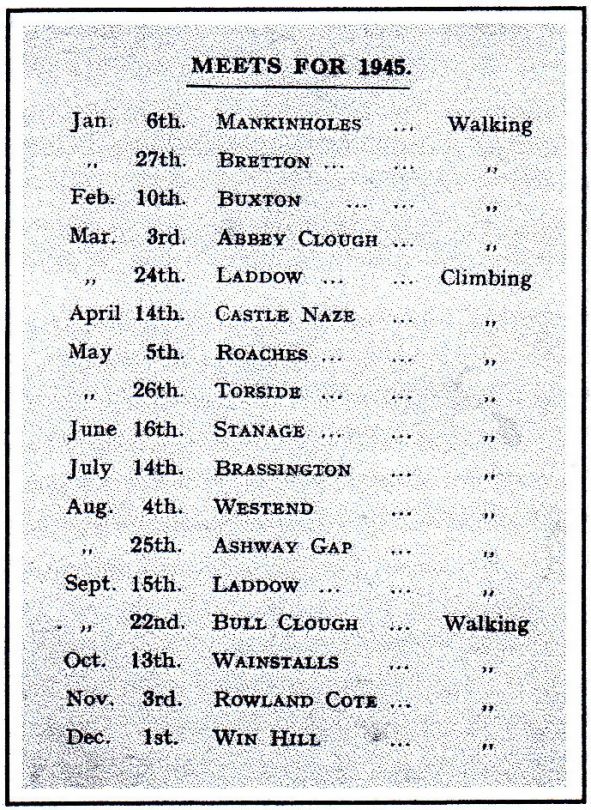 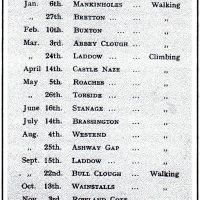 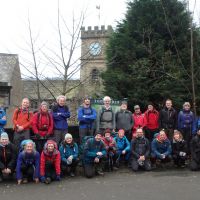 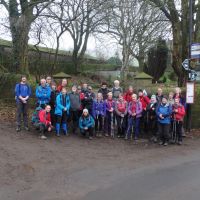 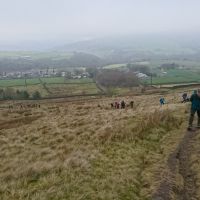 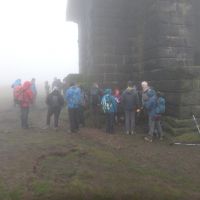 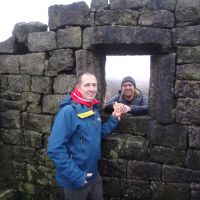 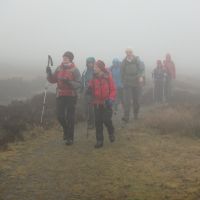 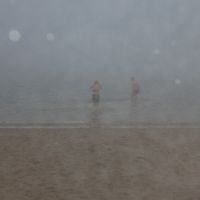 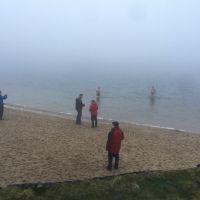 Despite the short grey days of the post-New Year lull and some last-minute confusion on the trains, there was a gratifyingly large turnout on this meet! Due to cancellation of alternating trains between Manchester Victoria and Todmorden on the Sunday in question (apparently as a knock-on from industrial action by Northern Trains on the Saturday) requiring some hasty website and email updates advising of a change to a later train connection for rail users, the meet leader and several others (Mark, Michelle, Simon and Dave Wylie) arrived some time shortly after 10am on the later train which itself was slightly behind its scheduled arrival time of 09:58. They were very pleasantly surprised to find 22 others awaiting them on Todmorden’s Station Approach, making a total of 27 members and guests! After a few group photos (including some taken by a very helpful coach driver who was roped in), we finally started walking at about 10.15am, about half-an-hour after the originally intended start. The weather was relatively mild for January, with no ice or frost even on the tops, and despite some mud underfoot there was no rain on the day, although there was some heavy and damp mist up on the moors.

We walked up though Todmorden to follow the farmland track of Rough Side Lane as far as Lumbutts Road, following this for some distance past the Shepherd’s Rest Inn and on to Lumbutts and the Top Brink Inn. We then followed a track across fields to Mankinholes, where we gathered at the gates of the Youth Hostel. Here the meet leader read out a relevant passage from the KMC Committee Meeting minutes of October 14th 1948, as recorded by the Secretary of the time, Eric Flitcroft:

“In connection with this last letter I had to report that Club members were received most unfavourably at Mankinholes Youth Hostel on a recent meet. This being due to the Warden having been informed that, ‘he could expect trouble from members of the K.M.C.’. It was agreed that mention should be made in the News-letter of these incidents and that it should be impressed upon members to do their utmost to combat this feeling against the Club. [George] Bosson suggested that members should make less noise, i.e. needless shouting & singing. He felt that members were not as tidy as could be expected & that the leader of the meet should see that Hostels, Huts & Camp Sites were left in an orderly fashion. [Bowden] Black was asked to draft out a list of duties expected of a meet leader. There was a general feeling that leaders should be more appropriately chosen and that prospective leaders should be consulted as to their willingness to lead any particular meet.

I proposed, seconded by [Bob] Upton, that the following should be _deleted_ from the Constitution, ‘It is advisable to be a member of the Y.H.A.’”

The ‘last letter’ referred to above was a reply from the Hostel Warden of Idwal Cottage relating to then-recent accusations of bad behaviour by Club members in the vicinity of the said hostel – apparently a case of mistaken identity as it had been verified that no KMC members had actually been in North Wales at the time! However it was observed that the Mankinholes YHA played quite an important role in the early years of the KMC: as well as being the apparent location (no actual details seem to have survived) of the first known advertised meet as a club (subsequent to the Foundation Meet of November 1944) on January 6th 1945 (74 years to the day before our 2019 walk), and an occasional venue for club meets in the following couple of years, the 1948 Mankinholes meet (which appears to have taken place on the weekend of 2nd-3rd October) led indirectly both to the KMC’s ‘Duties of a Meet Leader’ guide, an updated version of which is still to be found in the annual Handbook, and to the deletion of the clause in the club’s early Constitution advising membership of the YHA (Youth Hostels being a regular option for accommodation at the time).

After this historical interlude, we followed tracks and joined the Pennine Bridleway, eventually striking out to follow a steep path up to Stoodley Pike. Up to this point, visibility had been good, however the Stoodley Pike Monument was hidden in thick mist (to the extent that it could not be seen until almost at its base!) as was the adjacent high moorland.

A large contingent climbed up the dark spiral stairs to the Monument’s viewing platform (though the view was mainly of the mist!) and had a very late elevenses – it was in fact about 12.15pm when we left the Monument. At this point Iain McCallum, Keith Williams and Chris Thickett split off from the main group to do a shorter version following the Todmorden skyline along the moorland edge rather than going round the reservoirs.

The rest of the party then followed the Pennine Way S/SW though the murk to the turn-off signposted for the ‘Reservoir Circuit’. It was decided to miss out the Little Holder Stones and their trig point due to difficult route-finding across deep heather in the mist, so we stuck to the easier but longer obvious path to the reservoirs. After signs of incipient mutiny in the ranks, we finally stopped.for lunch at about 1.15 p.m. at a ruined stone cabin near Cloven Stone, before carrying on around the cluster of White Holme Reservoir, Light Hazzles Reservoir and Warland Reservoir in succession. We then continued to the damp and misty sands of Todmorden Beach at Gaddings Dam (taking the long way round the reservoir due to the meet leader not remembering exactly where the ‘beach’ was), where following Midge’s example (although she was the only one with a wetsuit), Michelle and the meet leader donned cossies and took a quick but invigorating dip in the chilly mist-laden waters (the water temperature was 4.5°C according to Midge’s thermometer).

We then started the descent towards Todmorden past the Shepherd’s Rest Inn and back down Rough Side Lane – an advance party of Mark, Michelle and Simon made it back down in time for the 16:22 train to Manchester, although others were struggling with dodgy knees (indeed a small party waited at the Shepherd’s Rest while Andy rushed ahead to get the car and pick them up) and the main party were back in Todmorden by about 4.30pm (a little later than anticipated). Most then headed for home, although a small party went for a well-deserved drink at the White Hart.

Total distance walked was about 13 miles – a little longer than planned, mainly due to the longer route taken around the reservoirs of White Holme, Light Hazzles and Warland in the mist.

Thanks to everyone who attended and made the first meet of the KMC’s 75th Anniversary Year such a success!