Peter following up the Spencer Couloir on the Aig de Blaitiere in the Chamonix Aiguilles (Photo: Jim Gregson) 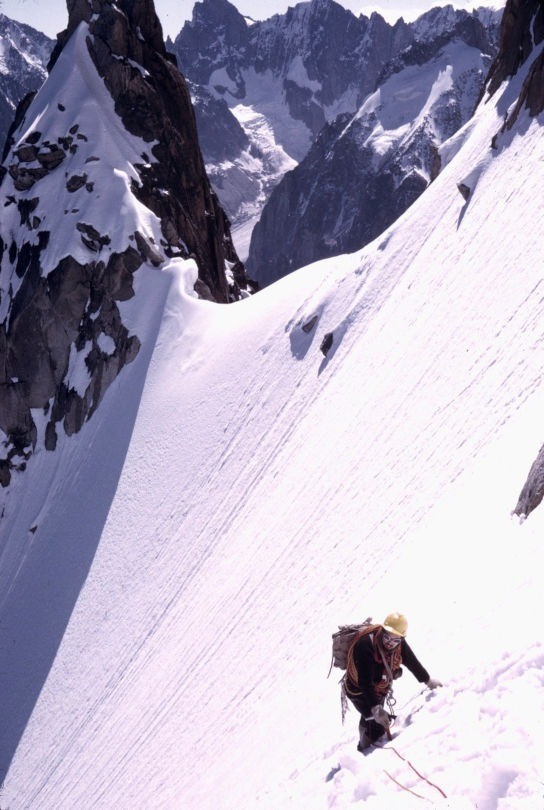 Peter with a group of his young friends from the Benchill area of Manchester – among them Peter Scholefield, Stan Roach and Alan McGeary (all of whom also became KMC members) – started as hill walkers, with Peter leading groups for his local Methodist church. One of these walks took them past Windgather Rocks where, spotting climbers in action, they decided to give it a try for themselves. Via McGeary they made contact with the Karabiner MC, and began to attend outdoor meets.

Peter, wanting to show that he could look after himself on the hills, went to Exchange railway station to go to the start of a Marsden to Edale Walk. As he got to the platform the train began to pull away; Peter ran for it and luckily a door swung open and a brawny arm scooped him up into the carriage, where he found himself face to face with Robbie Worrall, wife of Plum Worrall (both founder members) who was the meet leader.

Peter, Scho and Stan worked at increasing their experience and skills, with Scho soon showing himself to be a very good rock climber. They also began to do some winter mountaineering, travelling to meets at first by motorbike, Peter starting with an AJS and later upgrading to a powerful Norton bought from one of the others. Stan before long bought a small van and that became their prime transport. During one Scottish trip, from a camp in Glen Etive, they made a fine traverse of the Aonach Eagach ridge. After that Peter took sick and began to cough blood; Stan legged it down into Ballachulish and returned to camp with a doctor who promptly consigned Peter to a bed in the local maternity hospital suffering from pneumonia. He was confined there for two weeks until Gwen, Peter’s wife could eventually see him discharged and returned to Manchester.

By then Peter had become very friendly with Len Stubbs, and Len knowing that the Walker’s flat in Chorlton was not so well-appointed took the couple under his wing and decamped them to his own place, Hardy Green Cottage, in Kettleshulme while Peter convalesced back to health. Peter had at some time worked part-time in Len’s shop and like so many of us benefitted from Len’s various generosities.

With increased experience, Peter with his close friends embarked on gaining some climbing experience in the Alps, deciding to head for Switzerland in the company of Scho, plus Bob Astles and his wife Beryl. They went up to Zinal in the Val d’Anniviers and for their very first-ever alpine peak they climbed the Zinal Rothorn, a superb 4,000m classic.

Next they turned their attentions to the Obergabelhorn but were slower to the point that in descending the NE Ridge they opted to bivouac just above the Grande Gendarme to avoid getting into trouble in the dark. This exposed bivouac site gave them a grandstand view of the north face of the Matterhorn.

The next morning, they traversed over the Wellenkuppe and reached the Rothorn Hut where the guardian told them they’d have to wait for access to the dortoir – Peter was instantaneously asleep right after stepping inside the hut! After a rest the party went on down into Zermatt to sleep in the basement climbers’ doss under the Weissmies Hotel, costing them half a crown each for the night (12.5p – not bad for Swiss prices!) Still keen they then went to try to climb the Matterhorn but poor weather and conditions saw them make a traverse from the Hornli across the east face to the Furggen ridge before giving up. Then they had to make a two-day trek to get back over to Zinal where their vehicle and tents were. Quite a good first alpine holiday.

In the summer of 1973, Sandy and I, by then also KMC members, were also keen alpinists and we teamed up with Peter and Gwen plus Stan Roach for a trip out to the Chamonix valley. Peter with great generosity arranged for Sandy and I to go out there in Stan’s speedy car while he and Gwen travelled by train. Stan was mostly walking but at times he joined us to help carry gear up to the huts. Peter and I wanted to climb the Spencer Couloir on the Aig. Blaitiere, so with Stan we went up to sleep in the fabled Chalet Austria (favoured a few years earlier by the likes of Joe Brown and Don Whillans). After we had settled into the straw two other KMC folk rolled in after dark – they were Alan Payne and Gavin Anderson – and there were some words exchanged between Peter and them as they tried to commandeer the water supplies, we had laboriously carried up. We did not go thirsty!

In the dark Peter and I started up the hill and onto the serac-threatened Nantillons Glacier to get to the Spencer. Just as dawn broke a helicopter roared onto the scene deafening us and spraying us with down drafted snow and ice particles as it hovered just above us. Unknown to us, just a bit further up were two German climbers, one with a broken leg, who had taken a tumble the day before when descending and spent a cold night in a crevasse. Eventually they were winched aboard the chopper and flown away leaving us in peace to continue and complete our climb. Reaching the very small summit overlooking the very steep north face of the Aig. Du Plan.

After downclimbing we worked our way back through the woods but being a bit tired and slow we were rather late in reaching our campsite. Sandy and I went off by ourselves to do some other climbs for a while. But with Peter we made a traverse over the Domes de Miage and Aig. de la Berangere from the Conscrits Hut, in those days a glorified garden shed type of cabin.

At this point we hatched a plan to get to Mont Blanc itself, but the voie normale was not to our tastes. Instead we would go up to the Tete Rousse Hut, Stan helping with the carry, and then Sandy, Peter and I would try to climb the massive 1500m NW Face of the Aig. Bionnassay before descending its E Ridge then going over the Dome du Gouter to try to sleep at the Refuge Vallot at over 4000m. The day kicked off with quite a bit of descent to get to the foot of the face and the climb could begin. Higher up we got a little crowding from a bunch Of Germans who were filming as they went; Peter had to staunchly defend our belay ice screws which the other team had asked if they could clip. All went well and we descended the very narrow and exposed E Ridge and plodded over the Dome to the Vallot. In the afternoon sun this was not a bad place but after sunset the small aluminium box turned into a real freezer and as all the few blankets were frozen solid, we did not get much true rest – although the smell of urine declined. The weather at first light didn’t look perfect and as Peter had already done Mont Blanc, he encouraged Sandy and I to ‘run’ up the Arete des Bosses to bag the top then rapidly come back down then we’d all hightail back to Chamonix thousands of metres below. We did our best to hurry and were fortunate to get to the top while there was still a view, but we didn’t stay long as we could see the gathering clouds. Racing down the ridge back to the Vallot we eventually realised that the normal crowds from the Gouter Hut had almost all tried to crowd into the tiny Vallot. As it tried to snow and thicken up, we eventually got Peter to squeeze out to the door and as we roped for the long descent, other groups asked us if they could come down with us through the thickening cloud. We said they could follow us if they wished, but on telling them we were heading for the Grands Mulets descent and not the voie normale nobody took up the offer. We set off at a lick and just kept going, eventually coming out below the cloud and then speeding up to get past the seracs above on the left of the glacier. We didn’t go to the hut but continued until we were faced with crossing the fabled Jonction, the huge labyrinth of crevasses and seracs where two glaciers collide and then we stopped to try to spy out a route as there were no visible tracks. With a bit of luck, we avoided most of the potential deadends and got to the far side with some relief before the final slog down through the woods to the valley floor and the teapot.

Great days – and great to share them with Peter. Of course, we’ve also shared many other great days in the UK too, as well as serving on the KMC Committee together. Peter was able to offer a wise counsel when required and he served on the club committee in a variety of roles. He was a very good organiser of the Black Memorial Lectures over a period of years, securing the services of some very well-known lecturers for the club.

He used to speak with some fondness of some of the eminent mountaineers who had been invited to be the president of the KMC, John Hunt in particular. While at times very busy with his own family and career he continued to attend KMC meets, both climbing and walking, as well as helping with quite a bit of the early development work on Ty Powdwr, our club hut, and in recent years he went out quite a lot with Keith Williams – Picos de Europa et al – and walked frequently with Alan Liv. Jones. He was also a capable skier, doing the Haute Route with Alan and Gerald Carradus, and later on used to join Scho for various skiing adventures in the Alps.

I always found Peter to be very reliable company on the crags and in the mountains, and will treasure the memories of time spent in his company. The KMC, the fabled “Club of Pals” - a sobriquet often used pejoratively! - was well-served by people like Peter and the great duration of his membership shows how much he thought of the Club. I hope that more of us who knew Peter over the years will remember him with great affection and will be glad to have known him.