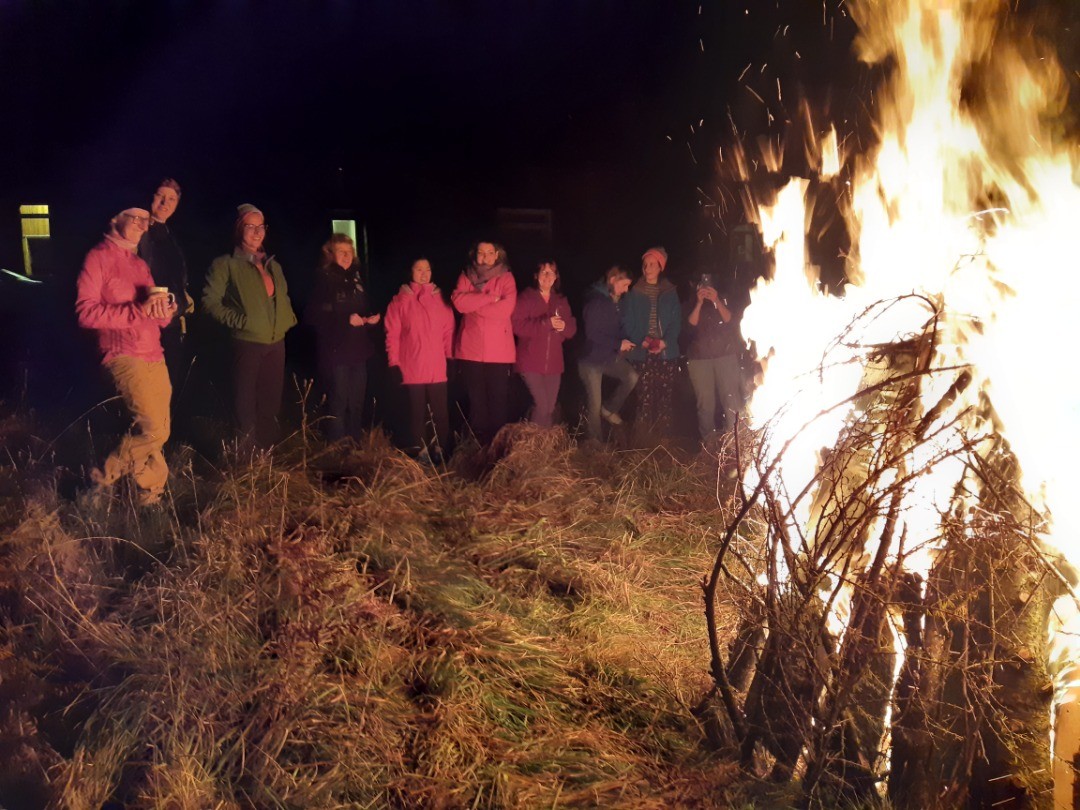 This year's KMC Bonfire Bash turned out to be "The Three Daves and The Women Meet"!

The initial Dave, who had been volunteered at a late stage to take over as meet leader, arrived at Ty Powdwr in the late afternoon on Friday. He was joined in the evening by our club president, who brought along a second Dave. Our numbers were then supplemented by eight prospective members and guests who were all associated with Emily's Womenclimb organisation. They had come from far and wide to attend the meet, but it was the last section after the Bus Stop Quarry turning circle that really helped them practise their navigation skills...

It soon became apparent that several of the Womenclimb group had various existing links to the KMC and its members. Mimi knew David Rainsbury from the climbing wall in Liverpool. Lorna had previously been to a KMC meet at Ty Powdwr with her other half, who is one of Mr. Shotton's friends. It later transpired that Hazel is a good friend of the meet leader's own brother, who is also a (lesser spotted) KMC member, via a caving club!

Saturday morning started off a bit damp, but the weather soon began to brighten up. Daves D. and W. wandered in to the slate quarries to have yet another exploration of the amazing industrial archaeology. The women, now joined by Mel, also headed towards the slate, to check out the "Snakes and Ladders" adventure and to mooch round in awe. The weather continued to improve and, by the time the two Daves were returning to the hut, the others had already been back to grab climbing gear and were on their way to the Bus Stop Quarry to do a few routes. A mix of "Solstice" (HVS, 5b) and "Equinox" (VS, 4c) got climbed, along with "Comfort Zone" (F5b) and "First Step" (F5a). Eventually a bit of dampness returned, so they headed off to Lodge Dinorwic for mandatory tea and cake. A scenic wander thorough the Padarn woods then brought them back to the hut.

Meanwhile, the two Daves spent the afternoon constructing a bonfire. The meet leader built the "core" of this, based round the small drop-leaf table from the hut which had succumbed to woodworm (what will Mr. Stratford use as his DJ table now?!). A large quantity of old floorboards from his eternal DIY house refurbishment provided the dry fuel for the fire. Some of the huge pile of old climbing magazines that had been discarded from the hut were torn and crumpled up to make initial ignition easier. While this "core" was being assembled, the other Dave (Mr. Dillon) performed a safety inspection of the trees on our property, removing all the fallen, loose or overhanging branches and dragging them along to put on the pile. The old, woodworm ridden, shelving unit from the kitchen was broken up and added to the structure as well. Dave D. also did a bit of hut maintenance ("Every meet at the Hut is a Working Meet"), by clearing out a quantity of congealed pine needles from one section of a gutter. This was, however, too sodden to burn so did not get added to the fire.

The third Dave of the weekend, David Rainsbury, arrived next. He'd spent the day in Caernarfon scraping Kate's* bottom. Soon after this, the climbing team returned. They prepared a communal meal and shared it with those Daves who wanted to join in. This meant that the original meet announcement's promise of a meal was in fact provided, with no effort at all by the substitute meet leader! Many thanks to head chef Emily and her team of vegetable choppers.

With food consumed and washing-up done, the main event of the evening began. The bonfire was lit and it provided a suitable focal point around which the ten women and three Daves mingled and chatted. The fire burned very well, to leave a pile of beautifully glowing embers for the last hardy few still outside to admire. Back in the hut, one of the modern tabletop games provided entertainment, amusement and bewilderment in various proportions. People drifted off to their sleeping bags at times ranging from the sensible to the rather too late.

The view from the hut window on Sunday morning showed sunshine over Anglesey. The Womenclimb team (plus honorary woman Dave D.) therefore decided to head to Holyhead Mountain to do more climbing. It seems that they had an excellent time and multiple routes were done.

David R. went back to pander to Kate* in Caernarfon.

The meet leader was last to leave the hut, as per the "First In Last Out" principle. During the final check round, he spotted that the last old wooden dining chair in the kitchen had active woodworm in it. He therefore used this to start a stockpile of fuel for the next bonfire. He then drove round to the Llanberis pass and had a short exploratory wander up Cwm Glas Bach, over Clogwyn Mawr, then down Cwm Glas Mawr. It was very wet underfoot, but it stayed dry overhead.

The meet went very well, even though only four full members from the club could be there. Despite appearances, it was not actually a prerequisite to be a woman or a Dave to attend! It definitely helped that the weather over the weekend was much better than the dismal forecasts had predicted. At least one of the non-members who came is keen to join the club - her previous intentions to attend meets having been thwarted by cancellations due to bad weather. Another has subsequently registered with KMC as a prospective member. One guest rated Ty Powdwr so highly that she gave it a five-star review on-line! Everyone seemed to enjoy themselves and, hopefully, will spread the word that the KMC is a very welcoming and inclusive club.

* Kate is David's boat: a Vancouver 274, now out of the water for the winter.
Well, what did you think was going on in Caernarfon?!