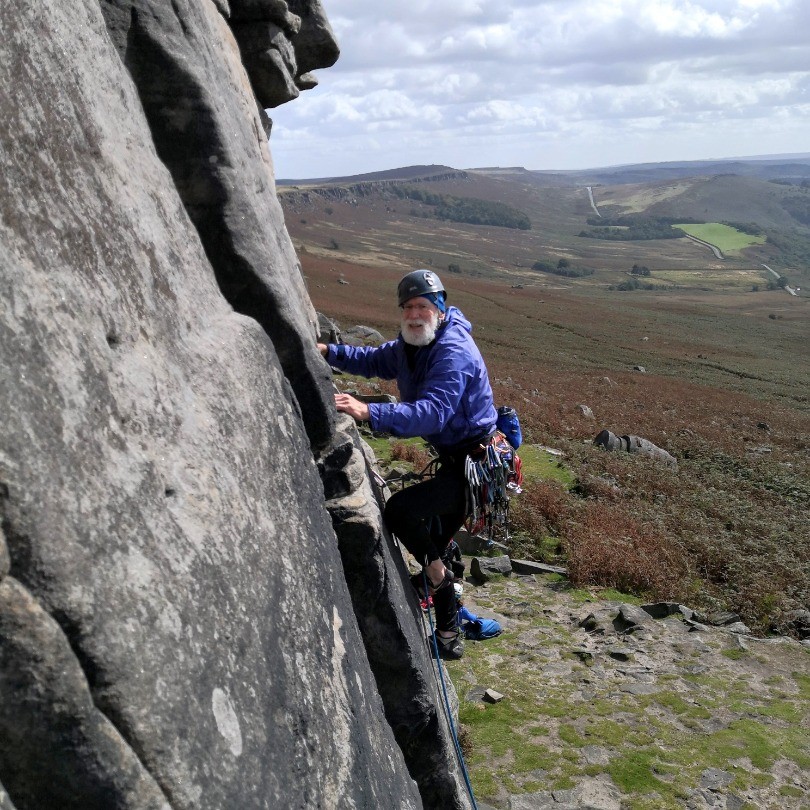 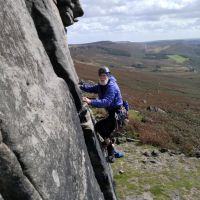 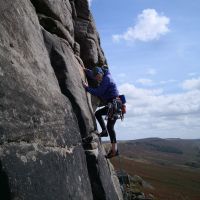 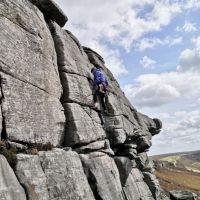 The day dawned bright and, unsurprisingly, the parking at Dennis Knoll was quite busy. I met John and we wandered up to High Neb buttress. There was a pair already climbing on High Neb buttress, and I decided that would be my first route. I soon remembered that the first move can be challenging for those of a shorter stature (described in the guidebook as a ‘’tough, physical start’’) so I was pleased when James arrived just in time for old fashioned combined tactics to be deployed to bypass the hideously polished footholds. The rest of the route is always fun, but challenging, and even with cams, always less well protected than you would like. Respect to Ivar Berg who first climbed the route in October 1915, most likely in nailed boots. Mind you, he was quite good….  the following year crag historians record his lead of what may have been ''the worlds’ first E1'' – Cave Arete Indirect at Laddow!

Overall, the High Neb area felt surprisingly OK for socially distanced climbing - not too busy but there were a few folk about. Paul and Jim had arrived as well and climbed in a pair for the full day. They did Cave Buttress Sev (good fun), Mantleshelf Climb (bit stiff for VD!),, X-Ray (HS), Beanpod (S), Richards Sister (HS), Cosmic Crack (VS), Heather Crack (HVD), Duo Crack Climb (VD) and Ono (S).

Jim did have to finish off a couple of routes that gave Paul a kicking - he blamed it on a new pair of boots... (maybe he should have gone back to his youth and put the nailed ones back on!).

Talking about youth, John Cox was in excellent form, leading Kelly’s variation (S 4a) and the fabulous cracks of Erics Eliminate (S 4a) – see photos. James led Tango Crack and then on Youth Buttress, Youth (V Diff). I led two routes I’d not done before – an eliminate line on Tango Buttress called Lost Soul (S 4a) and a short route at the Knutter area called Erica Micra (S 4b). The other was Heather Crack (HVD 4a), also at the Knutter which was, as ever, excellent fun.

A grand day out and great to climb with John again.