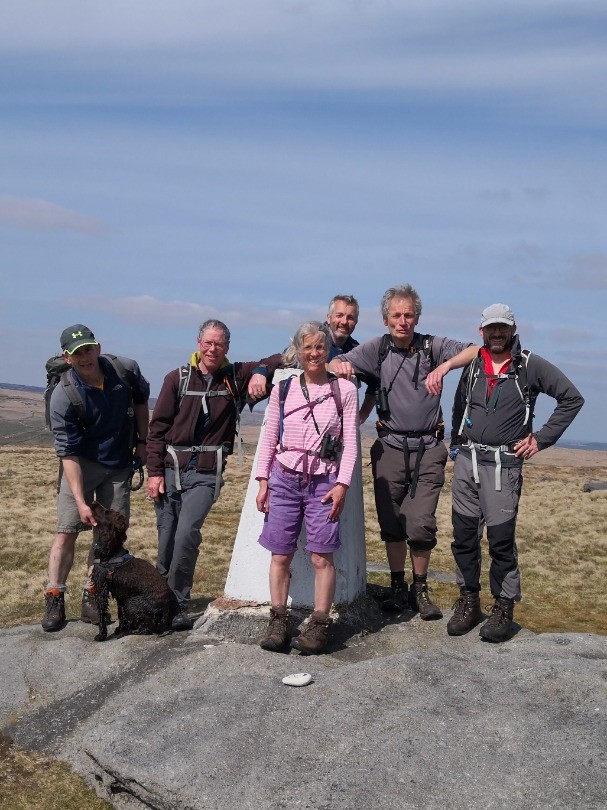 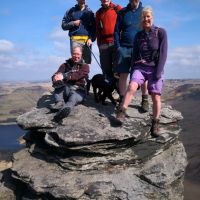 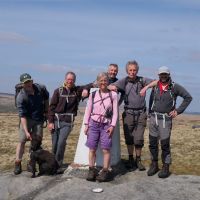 When I had recce’d this walk earlier in the year I’d discovered some ‘’pretty challenging’’ bits of moorland, all down to the underfoot conditions. However, after several weeks of next to no rain, the moors were bone dry and in the easiest possible condition for this long walk. The tactic of early parking at Binn Green just about worked – by the time we were setting off on the walk at 9.am the car park was full to bursting. We walked the longer and less steep way round to Alphin, Trig number 1 ticked off at 10.10 a.m. (4.5km). Just past Wimberry rocks, we saw a figure speeding towards us with his hand in the air - as he reached he asked us which the quickest way down was – he had fallen and dislocated his thumb. Joe ‘healing hands’ Dugdale examined him and tentatively offered to pull said thumb back into position, but then realised this could potentially cause the chap to pass out! As he was not in any imminent danger and seemed in otherwise good form, we let him on his way to the car park.

A quick elevenses break at the Top Chew res was next, where Jim discovered his lunch was a sausage and bacon butty made by Sue Marsden ‘’It was my reward for being Craig's power tool gimp on the van conversion until 11 pm last night’’. Henry stalked Jim but to no avail. Onward across untracked Moorland to reach the isolated and rarely visited Trig 2 of Featherbed Moss at 11.45 (10km). By this stage, Henry had been off the lead most of the time since Alphin and had already covered twice our distance. What is normally one of the wettest sections followed but this time the bone-dry moor allowed for quick progress to the Chew/Crowden watershed and a quick blast across the heather and down to join the Pennine way above Laddow, then onward along the well-stomped trail and eventually flagstones to Trig 3 (Black Hill) at 12.55 (15km). Lunch followed on the other side, out of the chilly wind although the blasts of sunshine throughout the day kept the otherwise cool temperatures at a more reasonable level. Henry had a brief lunchtime nap then got his dog mojo back for more joyous bounding through the heather. We got going again about 13.30 and reached Trig 4 (Broadstone Hill, 454m) at 14.50 (22 km) stopping for more tea and a natter with some locals. We were back at the cars for 15.45 (26km) – a most satisfying moorland stomp at a cracking pace! Henry was thoroughly worn out – his longest walk yet.

We were soon in the back garden, drinking copious tea and having the odd slice of homemade tea bread (Jo) and raspberry chocolate brownies (Jo) and Lemon Drizzle Cake (Philippa). Jim had his allotted share, then his allotted share again. Then left with 3 bulging packages of the spare of each one! Apparently, when he arrived home, he was relieved of said packages ‘’Those are going in the freezer, you’ve had quite enough cake for the week’’. You can imagine his face.

A great walk, great company, great food. Thanks, everyone for coming.