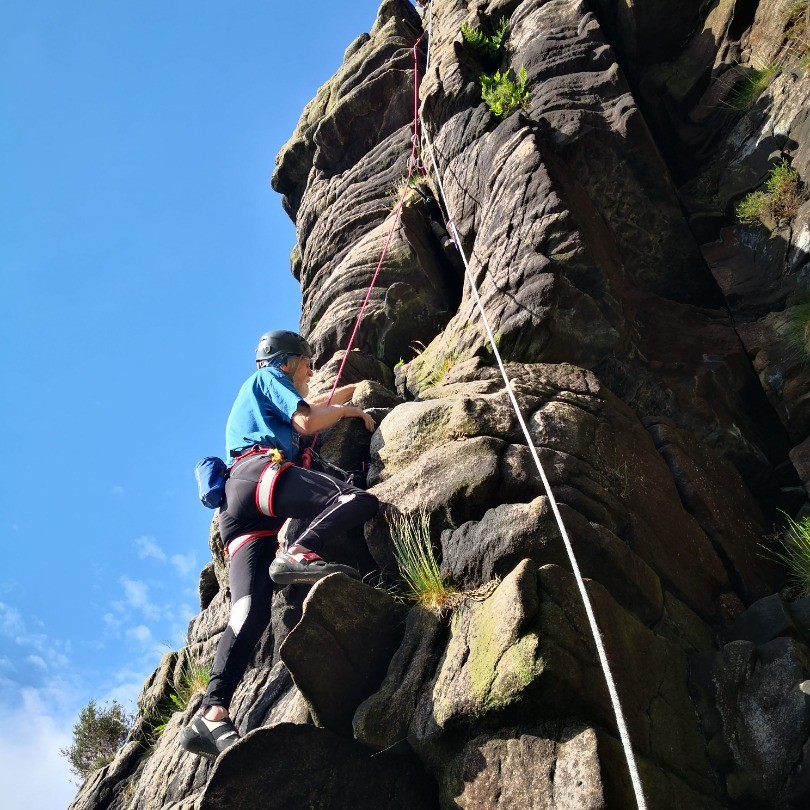 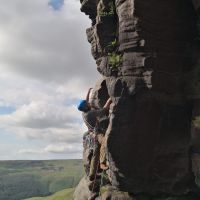 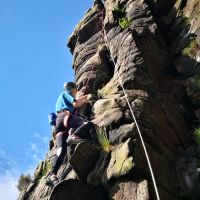 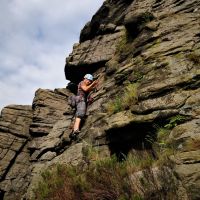 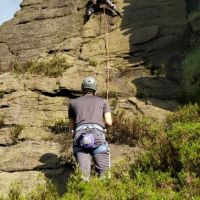 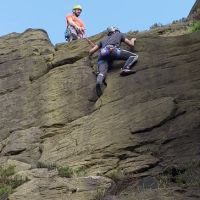 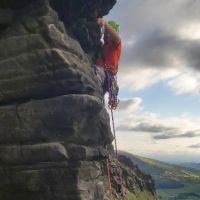 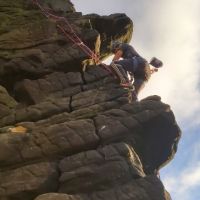 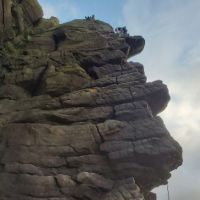 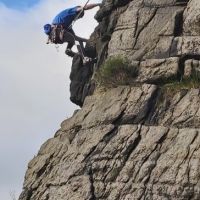 A few weeks back Dovestones was on the list but apart from the weather being marginal, both Jim and I were away. Neither of us fancied Staden, hence the plan was advertised to have a deviant group from the ‘’official’’ KMC weds…. for an alternative evening at Dovestones Edge in the Chew valley. It really is in such a glorious spot for a sunny summer evening, and the weather played out 100% tonight. Enough sun to climb in a T-shirt but enough wind to blow the midges off, even at the base of the crag. The 45-minute walk in seemed perfectly reasonable for the rewards reaped in terms of the stunning views.

Jim opted for a start on Swan Crack (S4a) noted in the guidebook as (ahem!) ‘’an Old Timers favourite’’…… a cracking route. Andy followed up on the adjacent Noddys Wall at VS 4b, a cracking route with just enough gear to make it seem reasonable, Jim followed and then John Cox who had just arrived.

‘’is everything here rounded?’’ asked John?

Jim then opted for the absolute classic Left Embrasure VS 4b, a fabulously steep VS, but with great positive jams and jugs most of the way. John followed up in fine style with Andy last.

‘’Ok, so that wasn’t rounded but it was bloody steep’’…

You can’t please some people!

Jim and John then partnered for the rest of the evening climbing Central Tower (V Diff), Matchstick Crack (Severe) and Answer Crack (V Diff), all which Jim led in usual fine style. Whilst John was working his biceps on Embrasure, Rory and Caroline climbed Central Tower then went on to Coopers Crack HS 4b which Rory thoroughly enjoyed. Matchstick Crack (S) is often green and slimy at the back of the bay near Embrasure, and hadn’t looked appealing on previous visits, so Andy led it for the first time with Jacob in hot pursuit. Sadly, Steve couldn’t join in the climbing this evening after twisting his ankle on the walk-in.

After this it was time for a mass ascent of the three-star moorland classic of Nasal Buttress HS 4b led by Andy (with a little hesitation at the crux!) and followed by Jacob, Caroline, and Rory who then wanted one final route before it went dark and we had seen Jim in a fabulous position on the wall of Answer Cack (V diff) from across the gully, so we dashed across, and Rory led it giving his answer without deviation, hesitation, or repetition.

The first tiniest hint of midge arrived as we packed up at 9.15pm. It had been a wonderful evening of moorland grit with great company, thanks to everyone for coming.