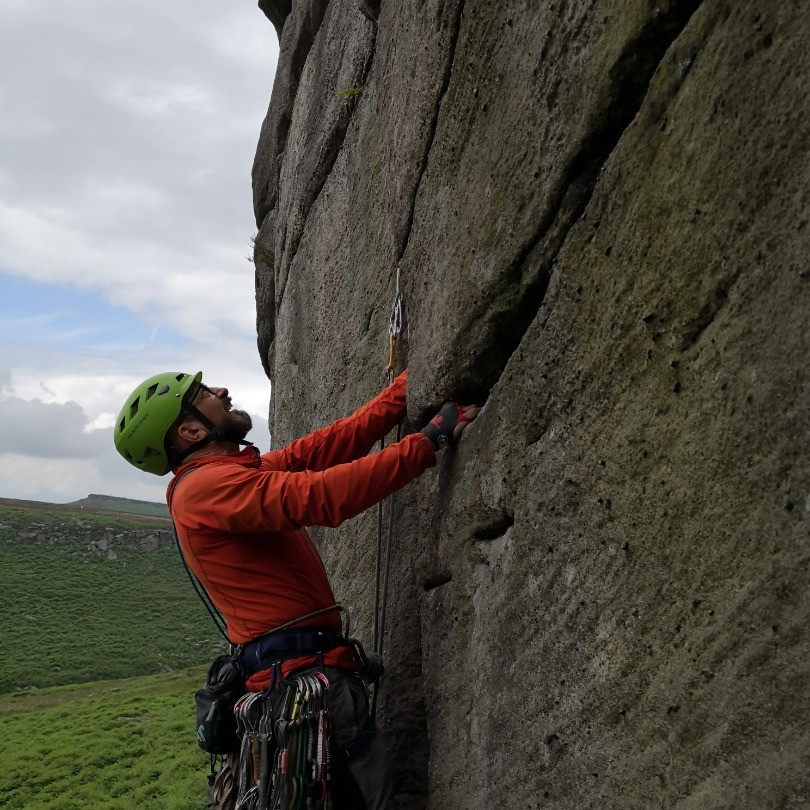 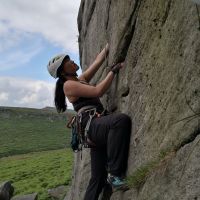 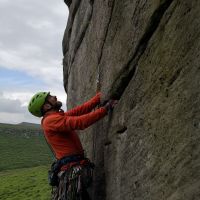 My apologies if I have missed anyone out – it was a well-attended meet.)

After a less than optimal forecast for the Saturday, the meet was deferred to the Sunday.  (I ended up spending the Saturday at Windgather – on my daughter’s climbing meet – where we had glorious weather but could see rain squalls off in the distance around us).

In a change in format to traditional reports – what follows is a summary of some of the day’s highlights – as reported by the participants.

Emily Thompson:  Emily and Jared had fun down at Ash Tree Wall.  Jared led me up Ash Tree Crack (VDiff) and Ash Tree Wall (S 4a) before he had a crack at Evening Wall (E1, 5b).  Jared had some concerns about the gear on the crux and when I'd asked what the hand holds were like he said poor.  This for me meant I was definitely not going to try to second it!  Thankfully Jacob, Nils and Rory arrived and Jacob was encouraged up the route.  The crux was definitely a struggle but Jacob persevered and got up in the end.

We then headed off to Knight’s Move area where Andy Pierce and Jackie were about to climb Knight’s Move (HVS 5a).  Jared got very excited about some shiny crag swag in Great Crack so I stood belaying him for what felt like half an hour while he dug about trying to free a cam.  Eventually he finished the route and abseiled down to continue digging.  Andy had swiftly got up Knight’s Move and Jackie was following so I managed to spot the tricky bit.  So, with a bit of huffing and puffing I managed to get up too.  Thanks for the belay Andy!  (Jared wasn't successful in retrieving the cam)

Jared wanted one last lead so then climbed Windjammer (E1 5b) before we headed back.

Mark Garrod:  Mark Garrod and Michelle Harvie called by the group on (what I think is one of the loveliest walks in the Peak District – author’s opinion) the circuit from Hathersage taking in Stanage, Burbage, Padley Gorge and the Derwent River (where Michelle partook in a dip).

Nils Elgar:  I spent an excellent day climbing with Rory and Jacob on a mix of some new and previously climbed routes.  I was particularly impressed by Andy’s (Pierce) and Jackie’s dog which would patiently wait for permission to grab items that had been balanced on its snout!  My biggest achievement was probably conjuring a perfect day’s climbing for everyone!

Andy Pierce:  Just like to say Jackie was very appreciative of your positive encouragement on overhanging buttress direct.  You had a very great effect as she then went on and did Black Slab (VS 4b) and Knight’s Move.  I'm hoping she has caught the bug again but funnily enough is aching today.  I Also did The Rainmaker (HVS 5a) and Dovers Progress (HVS 5a).  (Author’s note:  Andy asked that I include reference to Andy (Stratford?) cheating with his crack gloves!!!!!

Rory Marsden:  It was good to meet a few more members.  It was a great atmosphere and as usual everyone was really friendly and welcoming.  Highlights for me were Nils’ leads of Knight’s Move and Overhanging Buttress Direct (S 4a), along with Jacob' first lead on Overhanging Buttress Arete (Mod).  I was quite pleased with my lead of 20 Foot Crack (S 4b) Then both Jacob and I strength tested Jared's belay trying to follow him up Evening Wall (E1 5b).  The holds were quite slopey!

Robert Clark:  I arrived late, having climbed at Stanage with two friends, then walked over to Ash Tree area where I met several of the meet attendees.  I led Ash Tree Crack (VDiff), seconded by Bridget, Duncan and Harry.

Roger Dyke:  It’s had been a long while since I have so much enjoyed doing bugger-all, all day!  It was great to see so many friends, after a gap of almost two years.  Fun to have my hair pony-tailed by Jim with a hairband borrowed from Christine.  Hard work to follow Christine Beeston and Neil up Little Plumb (Diff) and Steptoe (Mod).  So hard indeed that I didn't have the energy left to follow Jim Symon up a VDiff – but he has kindly given me a rain-cheque for another day.

Jacob Torley:  Thanks to Nils and Rory I was able to lead climb for the first time and belay from the top.  I also did my first E1 and I will not be trying another one soon.  Overall it was a good day out which I enjoyed and I also felt I improved and gained new skills.

Steve Torley:  It was good get out and spend a full day climbing.  I was surprised how many routes I got through and definitely felt it the next day, especially in my shins – I think it's fair to say I got a lesson on why shorts and t-shirt are a bad idea for climbing on gritstone!

Duncan Zerafa:  The routes I climbed were Triangle Buttress Direct (S 4a) and Little White Jug (VS 4c) both led by Jared.  I then spent a while trying to figure out the classic boulder problem of Burbage, Banana Finger f6A, which I'll have to come back to finish.

Then a chance meeting with the British climbing legend Johnny Dawes at Ash Tree Wall, meant I spent about half an hour chatting to him on and off along with Andy Stratford and with guest Harry.  (I had to ask him about his climb of Gaia E8 6c at Black Rocks and Indian Face E9 6c at Clogwyn Du'r Arddu in Wales; only a handful of people have repeated it since 1986, and not surprisingly so!)  Andy Stratford had a chat about possibly doing a coaching session with the KMC at some point in the future.  The other funny thing was although he was actually taking a group of kids climbing, he found time to sell copies of his autobiography which he pulled out of a bag!

After that, I seconded Andy Stratford up Ash Tree Wall (S 4a), a great route; and Rob threw down a rope for a quick climb up Ash Tree Crack (VDiff) before setting off home.