Steve handled the start of High Neb Buttress Arete in his own style. (Photo: David Rainsbury) 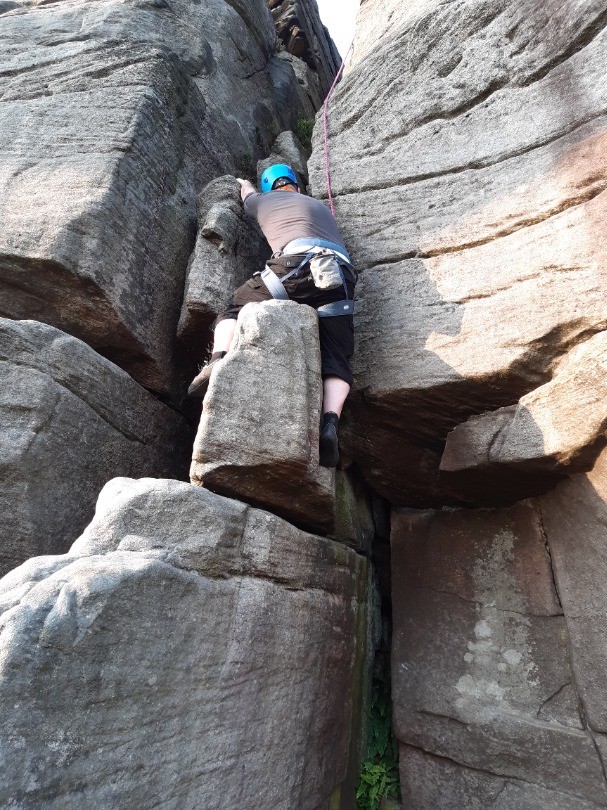 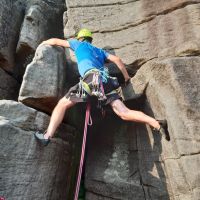 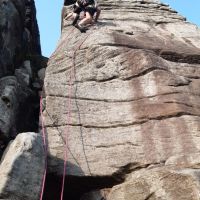 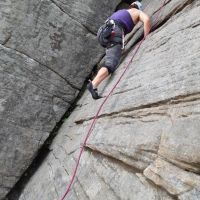 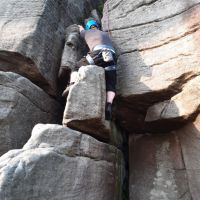 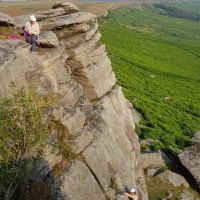 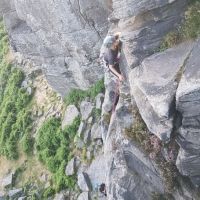 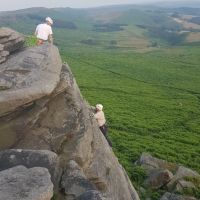 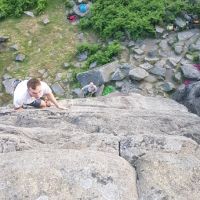 As Caroline said she wouldn’t be able to arrive until after 4pm naturally she was the only person who had arrived at the Dennis Knoll car park by the time we had arranged. David and I arrived shortly after and once the local sheep had inspected our cars and climbing gear (Stanage Covid protocol) we set off for the crag. As neither Caroline or I had climbed at Stanage North before, we weren’t expecting anyone else, and it seemed rash to carry our gear too far on a hot afternoon, we decided to start at High Neb and possibly move further left later.

Having identified a suitably shady section of the crag I started with Mantleshelf climb (VD) followed in good style by David and Caroline. After some light hearted speculation on whether Old Friends (E4 6a) was an appropriate test for his new knee, David then led Tango Crack (VD), employing the layaway right start, for his first lead on grit in two years. Caroline and I followed for a fine start to the evening.

I had just made the first moves on High Neb Buttress Arete (S 4a) when there was a polite enquiry as to whether we were with KMC. This turned out to be new prospective member Liam. Liam had, quite fairly, assumed that we would actually be at the left hand end of Stanage and so parked at Moscar and trekked down from there, including a battle through the bracken to the finally arrive at High Neb. Sorry Liam!

Liam and David teamed up and Liam warmed up with a lead of Where did my Tan Go? (HVS 5a) which turned out to be a more thorough test for David and his new knee.

By now Jacob and Steve had arrived and so they joined me and Caroline to climb High Neb Buttress Arete. As a party of four we arrived back to the foot of the crag in time to have prime seats for Liam discovering that the guidebook description of The Dalesman (HVS 5a) was indeed accurate. “The beckoning break gives a good pump with runners galore”. David again seconded Liam and confirmed that The Dalesman gives a good pump whether you are leading or seconding.

I then led Lost Soul (S 4a) with Jacob and Caroline, while Liam moved on to lead one of the Stanage classics, High Neb Buttress (VS 4c). Steve was keen to have a crack at High Neb Buttress so he joined Liam on that and found that the key mantleshelf moves are well positioned and balanced.

The final climb of the evening went to Jacob. Having led his first Moderate routes at Burbage a couple of weeks previously, Jacob stepped things up with an excellent lead of Tango Crack (VD), employing the straight up foot jam start. This was seconded by Caroline who must have had some sense of déjà vu as she made a second ascent of the evening.

By now a bright pink moon had risen over Stanage indicating that having climbed until 9.30pm we had definitely made the most of the evening. We all headed home having bagged some excellent routes, caught some evening sunshine and with only one or two midge bites!