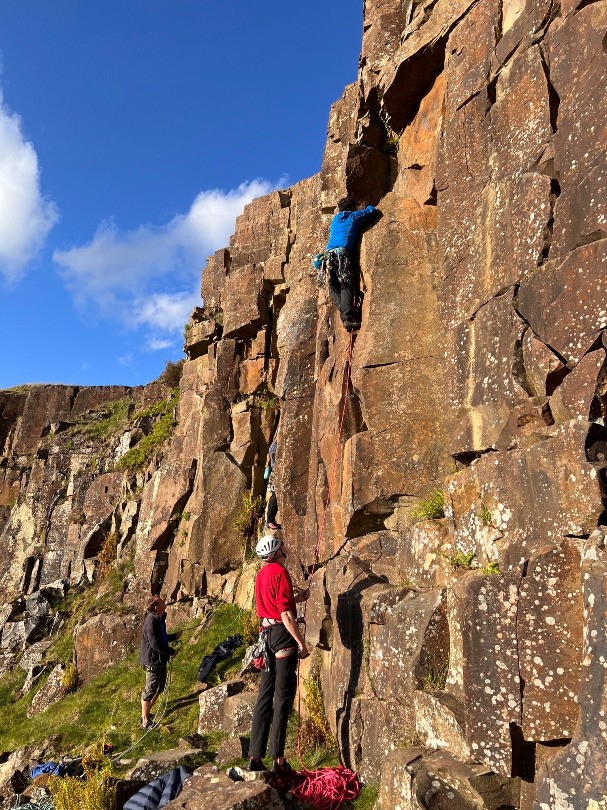 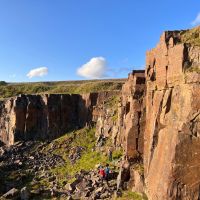 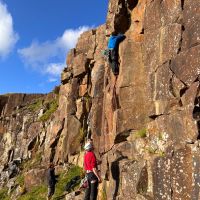 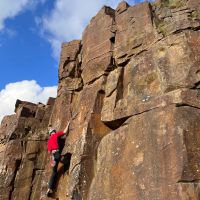 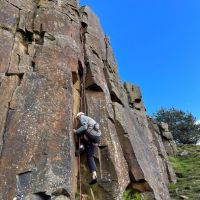 Wednesday, 12.22. Absolutely chucking it down. Radio silence, looks like nobody fancies it.

It was my first visit to Troy Quarry and initially looked like a remarkably popular venue thanks to the pupils on a climbing trip with a Bolton school (the wrong one according to Dave). Thanks to their boyish good looks it was tricky to spot Dave and Liam among the crowd but they made themselves known and then we were three. Noting that we had neglected to make an exclusive booking for the crag led us to the first philosophical question of the meet; is a quarry a crag?

With top ropes spread across the middle of the west face Liam took a line off to the right and got us started with Mucky Pups, VS 4c. Dave and I followed and before we had finished Jack and Daniel had arrived in time to get a rope on the route as well giving Liam a lead with four seconds. Just as well the sun was now shining in Lancashire!

Dave and I decided to get another route started, with me leading One Way Street, S 4a. By the time we were established on the route the school group were packing up, Mark (aka Bob) had arrived and we could split into three pairs to divide and conquer. Dan and Jack took on Cracked Wall, VS 4c with Dan taking the time to explore all of the route options. Liam and Bob meantime decided on a hybrid route combining Gopher, VS 4c, and Helen of Troy, VS 5a.

Next Dave decided to lead Left Siamese Twin, S 4a, raising the potentially thorny question of whether this is a politically incorrect route name. After agreeing that this matter was best left alone there was no further discussion of politically correct route names or twins, Siamese or otherwise.

With the place (is it a crag?) to ourselves and the evening sunshine beaming down the crew got stuck into the routes. Mark led Last Arete Left, VS 4c. Jack led Right Politically Correct Twin, S 4a. I led Overlooked Crack, HS 4b. Liam led a currently name unknown eliminate, HVS 5a. Mark led Troy Groove, VS 4b, and Dave led Stacked Deck, HS 4b.

With the sun getting low in the sky Dan and Jack decided there was still time for one last route and picked Bob the Gob, HVS 5a. As they started up the route there was an unrelated conversation about whether sandbag is written as one word or two.

a bag filled with sand, typically used for defensive purposes or as ballast in a boat.

With a fine display of traditional, modern and rarely observed gritstone techniques both Dan and Jack managed to overcome their self-destructive tendencies to get the better of Bob the Gob and brought the evening’s climbing to a close. A short walk down the hill in the moonlight and we were all soon back at the cars and on our way home. All in all a very enjoyable and worthwhile meet in spite of the inauspicious start to the day. Thanks to all who attended.