On bright frosty morning we set off from Longshaw Lodge through the estate towards the Grouse Inn and Froggatt Edge. Zoe, Hannah and Harry accompanied us for part of the way along the Edge. Harry was celebrating his sixth birthday ! After short descent through the woodland below the Edge we crossed the river Derwent by Froggatt Bridge and followed the river downstream for a few hundred metres to reach the path leading to Knouchley Farm. On the hillside we stopped for "elevenses" against a wall. Here Emily joined us having started a little late from the Froggatt car park.

On our way through Stoney Middleton we passed the so called "Roman Baths" a hot spring (17c). Soon we reached the Miners' Arms in Eyam where we stopped for a drink. Andy had to curb his impatience for a pint as we were a little too early and we had to wait several minutes for the pub to open.

From Eyam we turned north and headed towards Eyam Moor following the path by the Ladywash Mine and across the Sir William Hill road before stopping for lunch in the shelter of a disused quarry on the top of the moor. By this time the sun had disappeared behind the clouds and a keen wind was blowing. Here we regrouped being joined by Bob and Alan and his hungry dog. After admiring the fine panorama of Kinder Scout, Whin Hill, Stannage, Higger Tor, Carl Wark and Millstone we dropped down the hillside to Stoke Ford in Bretton Clough. From there we headed for Leadmill Bridge via Hazelford. En route the sun returned. Once across the bridge we turned south along the river and so to Padley Chapel where in July1587 two priests were captured. They were later executed by hanging, drawing and quartering in Derby. Following our ascent of Padley Gorge we made for Longshaw Lodge and very welcome cups of tea and cakes. But alas all the delicious cakes had gone!

Thank you all for coming on my walk. I hoped everybody enjoyed the day.

A good tramp around the edges, dales and moors on the east side of the Peak District. Good weather guaranteed! Distance 12/13 miles on good paths and tracks. 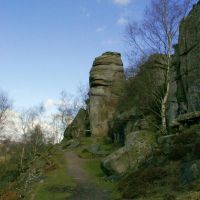 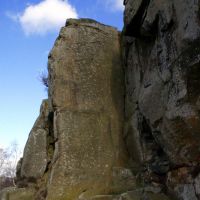 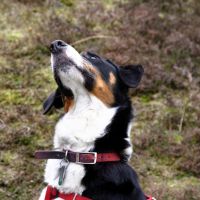 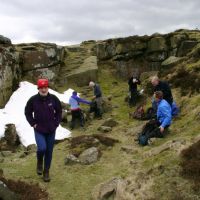 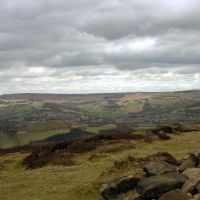 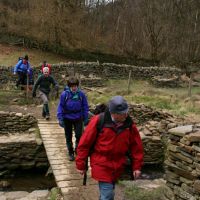 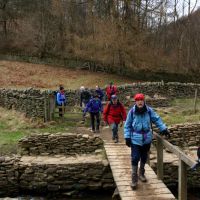