The fairly magnificent seven slumped, toasting gently in the warmth of the coal fire in the hut on Thursday evening, studying the various pieces of paper from at least half a dozen different weather forecasters.

‘’risk of flooding, burns in spate’’

Normally, I can find a thread of optimism in the most pessimistic of weather forecasts, however even I was failing to see something good to say about Friday.

‘’Saturday looks better for climbing’’ was the best I could manage.

It was full waterproofs from the off on Friday morning when we left at 9.15am, aiming for a Monroe at the eastern End of the Mamores – Sgurr Eilde Mor – a shapely mountain of some 1010m. After a minor detour in the woods in light rain we eventually found the correct land-rover track, following it to Loch Eilde Mor, then heading NE on a stalkers path towards the mountain in heavy rain. We grabbed a quick power snack before Meirion decided he was wet enough and turned back. Crossing the Allt Riabhach we squelched our way up soggy grass slopes in driving sleet to the snow covered boulder fields, and into the snowfall and gusting winds. Suffice to say there was no view at the top – just lots of wind and snow.

One of my trekking poles decided to go for a swim as we crossed the Allt on the descent, becoming wedged in a small (but raging) 3m waterfall a few metres lower.

Using food as the bribe, I tried to persuade Jim to strip off and retrieve it.

‘’You can have extra bread and butter pudding tonight.’’

We squelched back into the hut, wrung out cloths into buckets before filling the drying room to overflow. I made panetone bread and butter pudding for eight with custard and Jim spooned his extra anyway, claiming it was good medicine for his impressive cold.

The following day, Jim decided a day stood around on belays wouldn’t be good for his cold so traversed the E-W ridge of Beinn na Callich to Man na Gualainn (796m) returning along the West Highland Way. Meirion went in the opposite direction and climbed to the bealach at the head of Coire na Ba en-route for Na Gruagaichean  (1056m) when poor weather turned him back.

The FRCC have a golden key – the mythical ‘’Ben track key’’. It allows access to the good forestry track that leads all the way to the top car park by the dam on the way up the Allt a Mhuillinn. I had booked said golden key and the remaining five of us left at 6.30am.

As driver, the President’s task was simply to concentrate on the track. Others were responsible (I feel) for the (mis) direction along the forest tracks which eventually led us driving almost all the way downhill to the North Face car park. Eventually, after some reversing the car and apportioning of blame, we parked in the right spot and walked to the CIC in a good time of just and hour and twenty minutes at an easy pace. We agreed to meet at the CIC for tea and medals at 4pm or failing that, the car at 5pm.

Our approach was equally nervy, eventually we reached the bottom of the route with minimum efficiency and maximum faff.  A drawn out process to excavate an exceptionally poor belay followed then Stevie led a steady first pitch getting 4 bits of gear in the full 60m rope length. His belay took an age. I followed up – Stevie was at a rock island in the centre of a small snowfield. The belay was a 10cm single stubby ice screw and a buried axe. He showed me a load of holes drilled with another screw.

‘’Glad it’s not mine!’’ I could virtually see the rock through the ice. The screw tips had clearly not enjoyed their close contact with the rock.

I led on to construct a back belay for Steve, getting two good wires. Stuart followed up and we all ended up on my belay where I geared up to lead on. I didn’t dare look at the time of day. I romped up the splendid ice, neve and rock steps, placing about 4 bits of gear and eventually moving onto the buttress crest via a 4 m rock step. The rope ran out. As usual there was no obvious belay. 20 minutes later I had a good warthog, had chipped out a crap ice bollard and built a barely adequate seat. It would have to do. Communication was impossible in the wind and spindrift I just kept tugging hard, hoping they would follow. An age seemed to pass, and eventually the ropes moved.

It was 4.45pm when we set off on the plateau for the first of the big cairns to lead us to the Zig Zags. We had decided that there would be too much wind-slab in No4 for the usual quick descent direct to the CIC. No tea or medals for us today.  The wind, snow and spindrift were relatively pleasant in retrospect because as we dropped below 800m it was pouring with rain. Redburn came and went in the dark, the path ran out and we descended the boggy heathery ground to the Allt a Mhuillinn, eventually reaching the car at 7.15pm, soaked to the skin. Derek & Dave had my spare car key and had just avoided the rain – they were glad to see us back safe. They had climbed their route with great efficiency in 4 pitches, and had managed to descend No4 direct to the CIC before the windslab accumulated.

When we eventually arrived at Waters cottage it was gone 8.30pm. Within a few minutes the already fairly full drying room was bursting with dripping gear and sodden clothes. It smelt like a rugby changing room after the game.

The following morning, the rain was hammering down and the forecast for the entire UK and Scotland in particular was dire. We decided our quotient of fun of all types was sufficient and packed up to head back. As we sorted our gear, I received a very blunt 19am ice screw back....it was mine after all!

Thanks also to Tony Halliwell of the FRCC, also staying at Waters, for your company and good humour.

The first KMC/FRCC joint winter meet for some time at the well situated, spacious, well equiped Waters Cottage in Kinlochleven.

Well placed for Glencoe climbing and ski-ing, the Aonach Eagach, Ben Nevis (45 minutes), and superb winter walking in the Mamores right out of the door of the hut.

We are there for three nights arriving thursday late pm/eve and staying until sunday. 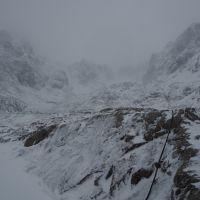 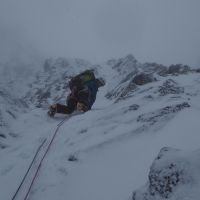 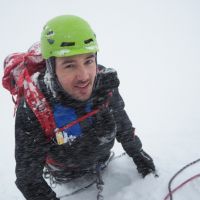 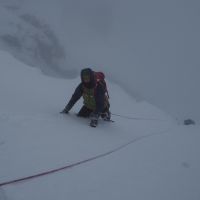