I joined the KMC in 1968, just 16 and still at school.  I had first climbed with a neighbour of my Grandparents who then lived on Anglesey.  Bill Poole took me to the Milestone Buttress and Ordinary Route. With a shoulder belay, no runners and a hawser laid rope, he set me on the path of rock climbing.  I can remember the excitement of traversing round ‘the garden wall’ to this day.  I thought I was in heaven.  Wanting to do more I went on a rock climbing course then looked for a climbing club.  My best friend’s Dad, John Lowe was a member of the Rucksack Club.  He introduced me to Mike Hardy of the Karabiner Club as the Rucksack Club did not take women.  John, who is a little older than me, had joined in 1966. ( I started climbing at school with an enthusiastic teacher.  After a few years of golf I went on Mountaineering courses at Seathwaite, Glencoe and the Austrian Alps.  Looking for a club, Ellis Brigham recommended the Karabiner Club.) Over the next few years I learned a lot about climbing and life to the detriment of my schoolwork but I was having the best time ever.

My first club meet was a walk across Kinder.  I thought I was on the moon, the landscape was so different from anything I had seen before.  Unlike most newcomers to the club one person did wait for me as I struggled on the steep bits and in and out of the groughs. That was Alan Barber.  Thank you Alan, your name will crop up again. I climbed regularly with Gerald Carradus who could remember every hold on every route he had done in the Lake District so when I was pushed into the lead he could tell me where the crucial ‘jug’ was.  I also climbed with Ian Pomfret.  He took me up Kipling Groove and yes it was ‘ruddy ‘ard’.

John was one of the harder climbers in the Club at the time and I was a little in awe of him and our paths never crossed.  I do remember going up to a high camp in Link Cove with Gerald – separate tents of course - and John took another young lady in his car and in his tent.  (I carried up an Arctic Guinea tent, cast iron frying pan and a rope and slings. Sharing a tent was just to save weight).  Ooh I was jealous.

Then one Autumn day in 1973 John invited me to climb with him on Cwm Silyn ( I hadn’t climbed for months because I had been working on the hut and was apprehensive about tackling such a hard route ).  We did Kirkus’ Direct which was graded HVS.  Remember then there was only one grade harder, at Extreme.  I had rarely done such a difficult route and was terrified I wouldn’t come up to the mark.  We made it successfully to the top. I was ecstatic and could have kissed him but didn’t dare of course (She was grinning from ear to ear and looked beautiful.  I was too shy to kiss her).

That winter 7 club members went to the Glenbrittle Hut for Christmas and New Year.  It had become a bit of a tradition for the KMC to have a Christmas Holiday in Scotland.  We went to Mamore Lodge, Skye, Glencoe, near Schihallion and Arran at various times.  On Christmas Eve Alan Barber, Liverpool Jones and I went up the Great Stone Shoot and ascended Sgurr Alastair.  John and Ian Pomfret had set out to go up Sgurr Thearlaich but retreated to the top of the Stone Shoot as it was too icy.  We all met up there and amid much banter Alan Barber encouraged John to give me a kiss.  He did, and I was shocked (She tasted of toffees which Alan Barber had just dished out).  For the rest of that holiday and a subsequent few days in the Lake District our new romance blossomed.  We had gone to Scotland as individuals and came back as a couple.

In March we went to Scotland for our first winter climbing together in Glencoe, doing classic gullies on Stob Coire an Lochain.  We first camped together that Easter at Lands End, with Dave Tracey and Sue (Harkness), doing classics on the major crags like Flannel Avenue and Little Brown Jug.

The year ended with another Christmas/New Year trip to Scotland.  This time we had booked a self-catering cottage under the slopes of Schiehallion.  The weather was largely miserable and the cottage had no drying room. Alan Barber had the bright idea of using the oven to dry his woolly coms.  The turkey we cooked later smelt better.  We had a good time despite the weather and on Christmas morning John proposed to me.  That bit is for us only but I did say ‘YES’.

The following year was a whirl of climbing, our first (and only) trip to the Alps with Jim and Sandy, and house –buying.  We found a lovely property in Romiley which needed massive work doing but decided climbing was more important than years of DIY and went for an ordinary semi instead which we still live in.

We were married in Altrincham on 4th January 1976.  Jim and Sandy, Alan and Christine Jones and of course matchmaker Alan Barber were invited.  Ian Pomfret, with whom both of us had climbed often but separately, was John’s best man.

For the next seven years we went away nearly every weekend and even when I was pregnant with Joanne the climbing didn’t stop.  She may be the youngest club member to have ascended Dream of White Horses.

This January we celebrate 40 years of marriage.  Thank you KMC for making this all possible.

In the wedding picture you may be able to spot Jim and Sandy Gregson, Alan Barber, Gerald Carraduf and Lord Hyde? 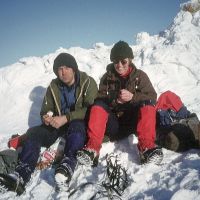 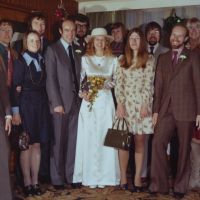