Elsie, who died recently two days after her ninety fifth birthday was a member of the KMC for nearly forty years and is probably best remembered for the wonderful hotpots at our annual photo comp held for many years at The Swan, New Mills which she ran with her husband, Bob (Charles Robert, also a member).  She was a larger than life character with an infectious laugh and sense of humour, the perfect pub landlady!

Elsie had no living relatives so the thirty or so people at her funeral were there not out of duty but out of respect and affection, nor was she religious so there was no formal service. Adrian Jones gave an address.  Alongside the coffin was a photograph she had chosen, Elsie and Bob on top of a mountain, the summit of the Matterhorn!  Not only had Elsie climbed the Matterhorn but en route caught a climber who had slipped and was sliding off the mountain!  Shades of Whymper and 1865.

The accompanying photo shows Elsie at an indoor meet 1959/60.

Elsie is in the white top, Alan McGeary to her right and Peter Walker behind on her left, with of course Sir John Hunt on the end. 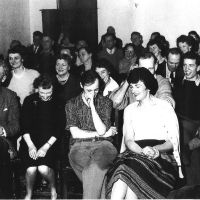