After reading about it (extensively) I decided to do the Cape Wrath trail, in at least two sections. This describes my walk in June 2016 on the “south” half.

For those who don’t know, the Cape Wrath trail is “… a long distance walk from Fort William to the North Western-most point of mainland Britain, Cape Wrath. The route is unmarked and there is no official line. It is a superb route for very experienced long-distance backpackers, passing through magnificent wild landscapes for most of the route”.

The conditions could not have been better. Sunshine for most of the days (too hot on Day 7), light wind to keep midgies down, no rain, and few clouds.  The many normally problematic river crossings and bogs were all dried out. Good visibility made navigation a breeze. Be under no illusions - in more usual conditions, the route would be substantially harder!

Being “traditional”, I will give distances and heights in miles and feet, apologies to the younger members (i.e. most of you…)

Day 1. I started from Fort William at the foot passenger ferry. Over Loch Linnhe to its western shore. Then I walked south (!) along Loch Linnhe to get to Cona Glen. It was a lovely spring morning -

A long walk on good flat trails up Cona Glen took me to the col which leads over to Glenfinnan. Down into Glenfinnan on easy paths, and after 20 miles and 1600ft, I was at the B&B where I was spending night 1.

Day 2. Supposedly a shorter day, finishing at A’Chuil bothy after 12 miles.  Up Glen Finnan, under the “Harry Potter” bridge, again on good tracks until the col which leads down into Glen Cuirnean. At this point the path went AWOL, and I had to follow my nose down the Glen, to the bridge over the River Pean. Here, I turned left into Upper Glen Dessary, heading for the famous (notorious? legendary?) “rough bounds of Knoydart”. I reached the bothy just after 3pm, and not feeling completely wasted, decided to walk a little further, to take some miles off the next tough day in Knoydart. 15 miles, 2400ft. Followed KMC traditions and had a swim in the Lochan – a hot day!

Picture: My wild camp by Lochan A’Mhaim at the end of day 2.

Day 3. I walked west down the steep  narrow Finiskaig valley, to Sourlies bothy on Loch Nevis, round the headland to the Carnoch valley, north along the valley to its furthest north point, and up a steep spur to pick up the path leading over to Barisdale. I camped outside the bothy. 14 miles, 2600ft. A very hot day..cooled off in a stream near Barisdale. Mostly tracks, some good, some less so.

Picture: View down to Barisdale from the col.

Day 4. Thurs 3rd June. A short rest day - I needed one!  7 miles and 750ft, east along Loch Hourn to Kinlochhourn Farm. Stayed at the B&B, which I highly recommend. Scenery is fabulous.

Day 5. Another long day. 13 miles and 2400ft, north from Kinlochhourn into Coire Mhalgain, up to a col (I crossed a lot of cols on this trip!) just east of the Forcan Ridge, and then down into Coire Chaoil to eventually pop out at Shiel Bridge. No room at any B&Bs, so camped at Caravan Club campsite at Morvich.

Picture: View from the col east of the Forcan ridge, looking NE to the 5 sisters of Kintail.

Day 6. On most of the previous days I’d met occasional folk. Today I met nobody! Away from the campsite at 06:40, initially east by the river, then N up through woods, then over a col (yes another one) to the Falls of Glomach.  The guidebook describes a scary and dangerous descent at the falls; to a rock climber, and in good conditions, it is easy - in the wet and rain, it might not be. There was beautiful early morning light on the path to the Falls of Glomach (picture).

Down to Srath Duilleach, and then off east to Carnach and Iron Lodge.  At Iron Lodge I headed N and over another col (oh good…), to end up at the wonderfully situated and extremely isolated Maol Bhuidhe bothy (picture). I stopped here, had the place to myself. Another hard day, more cooling off in streams. Clouds about - but of course, I was in full sun for all the strenuous uphill slogs. 14 miles, 2800ft.

I walked anticlockwise round Beinn Dronaig to pick up the good path to Beinndronaig Lodge. Then I went N up the Bearneas valley to the col (upper section trackless, hard going), and down to meet the main road by Craig. At this point I had walked off the Harveys CWT South sheet onto the North sheet, so with 100 miles done, aches and pains building, hot and frazzled, and an easy train then bus trip back to civilisation beckoning, this felt like a good point to break the journey.

It was a superb trip in magnificent wild mountain scenery, and I was exceptionally lucky with conditions. In Sept I had a go at the next section of the route – further article to follow.

And in case you think this was tough…I know my place. A couple of weeks before I did this, the “Cape Wrath Ultra” was held. 90+ runners, doing the whole “normally 16 day”, 230 mile route, in 7 days. Now that’s tough! 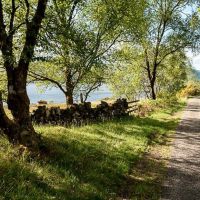 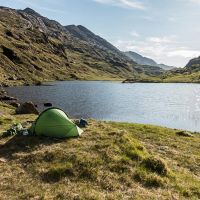 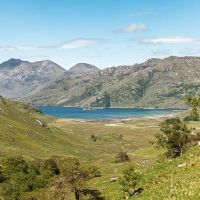 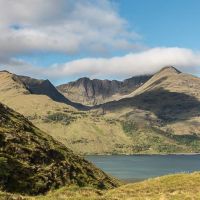 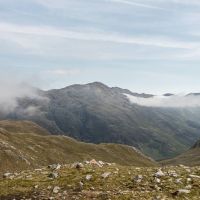 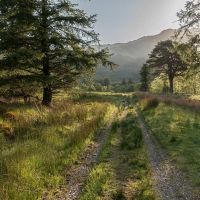 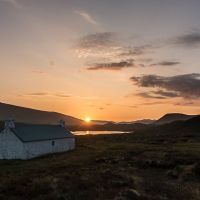