A Day to Remember

It was 1960 and since demob from National Service three years earlier we’d spent every weekend hitch hiking to hostels and climbing mountains throughout the UK.  One of the lads suggested that for a change we have our holidays in the Alps near Zermatt.  “We can’t climb big snow mountains!” I thought, but one of our friends had completed an MA (Mountaineering Association) course in the Pennine Alps and he said that we could!  And after all we had done Striding Edge and Crib Gogh in snowy conditions!

1966 came and we’d managed alpine mountains in different parts of the alps in five summer hols.  None of the team could come in 1966 so I booked with the MA.  They were highly respected and published the principal climbing magazine “Mountain” every month.

Our base was the Schwarenbach Mountain Hotel 1000m above Kandersteg in the Bernese Oberland, to which we travelled by train and boat.  The owner of Schwarenbach was a local Swiss Guide with whom we spent the first week, studying mountain-craft and climbing rock and snow mountains.  The leader knew lots of steep snow slopes and we had the best glissades ever!

Soon it was Saturday and we were woken up before 2am to climb the Tschingelochtighorn, a steep rock tower, it was the first alpine summit that Eric Shipton had climbed.  We climbed this tower which had lots of good holds despite its steepness and eventually arrived back at the hotel where lunch was ready by 10.30am.  “Surely we could have got up later” I thought, but our tutor said “you have another exercise this afternoon but this time without me!”

Our route led more or less south, climbing past the Daubensee to the Gemmipass Hut where we met the guardian and he asked “Sind sie die Engländer aus Schwarenbach?”.  We said yes and he said “Bitte folgen sie mir!”  He led us to a room with a small TV flickering in the corner and twenty Germans and Swiss were sat around too.  So the 8 of us found seats and I thought “what happens next, where’s our second mountain of the day?”

Then the telly spluttered and the World Cup final between England and Germany started!  For most of the game the Germans were cheering and jeering but eventually they shut up and then a voice said “They think it’s all over – it is now!”  However, it wasn’t over, we had to struggle back knackered to Schwarenbach, where a celebratory dinner was waiting, to complete our memorable Alpine Day.

So I’ll never forget where I was when England won the World Cup 50 years ago!

I still had another forty Alpine holidays left to enjoy and remember too.  What is more I became a full member of the KMC without having to “Graduate” in the autumn of 1966.

Thanks to Dave Dillon for scanning the slide. 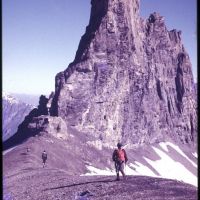