Ski-touring in the Tyrolean Alps, March 2016

In 2016, James was awarded a club grant to allow him to receive ski-touring training in pursuit of a joining an expedition to Alaska. This was used to get off-piste training in the Alps (Chamonix) with the excellent Alison Culshaw (offpiste.org.uk), but unfortunately the Alaska expedition did not go ahead. So instead, James joined Mark on an Austrian Alpine Club (AAC) hut-to-hut tour in the Austrian Alps.

The Austrian Alpine Club have always offered very competitive membership (compared to the BMC), and for around £50 it includes high-altitude (<=6000m) rescue insurance & reciprocal rights discounts at selected huts. More recently, they have been offering free ski-touring instruction (level 1: non-glacial & level 2: glacial) to members on the condition that participants subsequently run a free trip for AAC members. So we thought we’d go along to a quieter part of the Alps (Stubai Sellrain) & see what it was like – following our motto “If it’s owt for nowt we’ll have it!”.

Wanting to be green, we decided to share costs & drive the 16 hours (1000 miles) to Gries im Sellrain in Austria (South of Innsbruck). “Just head towards Cham & turn left for a while” said James! The journey was pretty good, experiencing the no-limit motorways of Germany & grabbing a few hours’ sleep at a truck stop near Zurich. Our guide Gerry Kenny (a very friendly Irishman) had arranged initial accommodation for ourselves, David (a GP) & Clare, Ian (a Scottish ex ski-instructor) & Steve (an ex-Officer) with a very friendly hotelier (Erik & Mirka at Gastehaus Landhaus Tyrol). Arriving a day early (Sunday 6th March - day 0), we got our ski-legs working by skiing & off-pisting the local resort (Kuhtai) – acclimatized with a few Radlers and watched the setup for the filming of the TV show “The Jump”, resisting the temptation to have a go down the ramp.

On Monday, an overnight dump of snow had meant that high avalanche conditions meant a change of plan from the hut-to-hut itinerary, so the main group went instead for a low-level valley tour from St Sigmund to the Neue Pforzheimer hutte, through the local pine forest. James & I took the opportunity to ski for the first time in St Anton & escape the hoi polloi. This was an excellent resort a couple of hours drive away, with well-connected areas & good off-piste in observed areas, as well as burgers the size of your head.

On Tuesday, with the avalanche risk still high, we went back to Kuhtai to practise touring as a group on the hills near the resort & dam. The leader Gerry was surprised that the level of skiing expertise by all in the group was higher than his own, but more than made up for it on the uphills with his Triathlon-man stamina. There was powder to be had, and after an excellent evening meal of Austrian fare (e.g. Tiroler Grostl [friend bacon, potatoes & onions covered with a fried egg, with Germknodel [sweet dumpling]) we were ready to start the tour – a reversal of the route originally planned.

On Wednesday, we took the free Postbus to at the beautiful tiny hamlet of Praxmar & then skinned 2k to Lusens where there is a langlauf (cross country) area. Over the morning we took the steep 6k / 700m climb on icy tracks & alongside rivers to the Westfalenhaus hutte (2273m). At the hut we met Warden Roberto, his elderly and amusing father Ernesto who still serves dinner and their famous black Labrador dog Arik in this family-run hut. With its pulley system to bring food up from the valley, the range & quality of the food (& wine!) was truly wonderful in this high & remote location.

Thursday we departed at 8am with deep cold & clear blue skies, straight up a steep uphill towards the Winnebackjock col at 2700m. There was no wind & it became hot work following the zig-zags to the col, with James racing ahead. At this point Mark & a small group decided to climb on to Winnebackjock peak @3200m, before descending to follow the others down to the Winnebachseehutte (2362m) on the edge of a sheer valley. Descending on skis with a pack full of transceiver, shovel, probe, crampons etc... Over uncertain terrain is no easy option & I was wiped out a couple of times after hitting hidden rocks. However at the hut (due to squeezed itineraries from the weather) we given the cosy winter room & a log fire to ourselves, & could relax away the afternoon with beers in the sun. Unfortunately the next planned hut (Schweinfurter) was full & the Winnebachsee was due to be full, but Ronaldo back at the Westfalenhaus kindly agreed to somehow fit us in again.

Friday 8:30 we departed on a more adventurous route back to the Westfalenhaus on a beautiful sunny with a cool light north wind. We skinned east south east climbing onto the edge of the frozen Bachfallenferner Lake and close to the glacier edge at 2650m. We then climbed steeply north to the summit of Hoher Seeblaskogl at 3171m, & lunched 150m below the summit. Climbing upwards with skis strapped to our rucksacks we climbed the summit for incredible views. We then down climbed a short ridge onto the Grune Talzen Ferner valley, followed by a long sometimes steep descent on dream-like deep powder – the team cutting perfect parallel tracks & taking videos. This was James’ first taste of tackling deep powder carrying a heavy sack – but he was able to give Gerry a few tips! After a last 30min skin up to the hut, everyone agreed that this had been a challenging beautiful varied classic journey (total ascent circa 850m). This being such a good hut, the party-people from the valley started to fill up the corners at the weekend making for a louder night’s rest.

Saturday 8am we had the option of accommodation only at the Westfalenhaus, so opted to retrace part of yesterday’s route but onwards to the summit of Lampsenspitze (3150m) to enjoy another powder day. Unfortunately someone accidentally took James boots and we could not get the larger size to fit his bindings so he was hut bound (luckily later that evening his boots reappeared). The uphill took about 5h & didn’t agree with the cold I’d been nursing all week – skinning up with fog nipping at our heels as it rose up the valley. At the steep top it was clear, granting superb 360 views from the Cross under which we wrote our names in the logbook. We skied down through variable snow conditions & dense fog where we had to suffer a 3rd night of superb food & great company at the hut!

On Sunday there was fog & flurries of heavy snow. After waiting for conditions to improve, the bad visibility forced us to abandon a possible col crossing to Neue Pforzimer Hutte instead return to the valley. We carefully skied down from the hut and out to Praxmar arriving there at 2 PM. Then some coffee and beer and the Postbus back to the pension where our ever helpful hosts Erik and Mirka let us stay at short notice. There was a celebration in the local restaurant to mark our first experience of Austrian huts. Now that we know the area, & especially how very well connected all the Austrian reports are by free ski busses, we’ll definitely be back again.

On the Monday James & I decided to try a solo tour to the elusive Neue Pforzimer Hutte, however thick fog meaning there was the distinct possibility of skiing into a reservoir on the route there meant we has to stay in resort & have a day’s piste skiing in Kuhtai, where there was also a large outdoor gear sale. On the Tuesday we broke up the journey to meet up with friends on a ski-holiday at the very Gucci, ski the resort and later to sample the delights of the local hostelries till 2am. After a few hours’ sleep, we hit the road for the long drive back – having gained lots of great experience in the Tyrolean Alps. 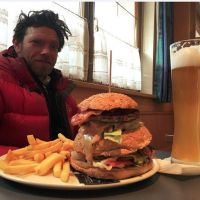 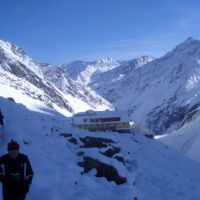 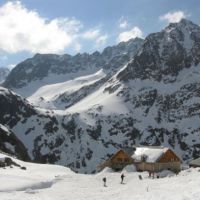 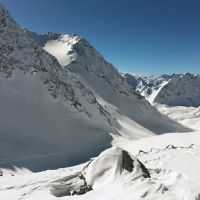 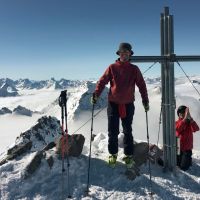