Forty-seven years after starting, I have eventually “compleated” the Munros. For those who believe that walking to Aldery Cliff is too far from the road, Munros are hills in Scotland 3,000 feet and over – all 282 of them on the current list. Those that manage to do all 282 are “compleatists”. (The spelling is traditional!)

So I thought I’d do a summary of 47 years of plodding up and down Scottish hills.

The First: Ben Narnain. A Hutchesons Girls Grammar School trip involving a crocodile of 200 schoolgirls and assorted staff in 1970. I had no gear so I think I used my uncle’s haversack and school shoes. Pity the poor walkers who set out that day for a quiet and peaceful day on the hill and encountered all of us. I don’t remember much about it, only a picnic at the Narnain boulders.

The Best: I don’t think I have one; so much depends on conditions on the day. By a process of elimination it has to be something on the west coast, with views of the sea and islands. That means a possible is Sgurr nan Gillean, offering superb views of the Cuillins and the Outer Hebrides, and Pinnacle Ridge for an entertaining ascent. Or Slioch – superb views of Torridon, and my first encounter with a brocken spectre. It was all about timing – people ahead of us by 10 minutes missed both the views and the brocken spectre. Or Beinn Eighe because the walk into the coire was so atmospheric in rain and mist, followed by sun and views on the ridge.

Coir a Ghrunnda (slithering described as a normal climbing technique to Heather) and eventual arrival back in Glen Brittle. Then Jim Symon launched the custard at me….Quite a day.

The Worst: No doubt about this one, Carn na Caim at Drumochter in 1993 with the KMC. It was a howling gale, sleeting and freezing cold. I still have a mental vision of Anthony Marsh chasing his map down the hill. I got so wet I put my so-called waterproof in the dustbin when I got home. I have been averse to walking on bad days ever since.

The Most Technical: No doubt here either, the Inaccessible Pinnacle. I’ve still not soloed it since each time I’ve tried it’s been greasy and wet. On the first Neville McMillan and I geared up half way up the route, not exactly ideal. Most recently, again ignoring all best practice, Jim Symon, Sabina Cosulich, Bridget Mapleson and Heather Standish (friend of Sab’s) and I all ascended it on one rope. The ladies conned Jim into doing the leading…….

The Easiest: Carn Aosda (and not because of the ski lifts!). But you start so high from the Glenshee ski centre that there is little left to do!

The Most Pointless: This is another easy one. The Cairnwell and Carn a'Gheoidh, Lester Payne, Graham Harkness and I hired touring skis and did both of these hills – on foot. I think we carried the skis all day because there was not enough snow!

Most Regular Companion: Myself, having done over 100 on my own. I’ve been on the wrong hill - most notably Am Basteir instead of Sgurr nan Gillean. I’ve gone round in circles – Glen Lyon in mist and more recently on Sgurr na Ulaidh when I thought I’d got past making stupid errors. I’ve met up with complete strangers and also enjoyed hills with no one on them all day.

I could go on … But thanks to all of the KMC who have been on the hills with me and added to the experience.

Now back to climbing, and maybe Corbetts? 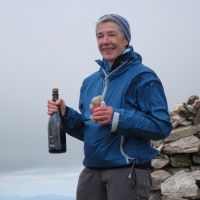