As my niece entered the house, she announced the weather was so wonderful, we just had to go for a walk. I said we should go up Shutlingsloe, knowing that Pauline had never been to the summit. She readily agreed, and so our route was fixed.

It was only after we left Macclesfield Forest and started rising more steeply up the hillside, I started to wonder whether I was capable of getting to the summit myself. But I had felt very good, so far, going at my own pace, and I said to myself, as I have many times in the past, “Nothing ventured, nothing gained,” and kept going. The crunch-point comes where the gentle paved path reaches a high drystone wall with cantilevered steps in it, and a metal gate on top of the wall. Beyond that the gradient seems to increase by an order of magnitude, and the terrain becomes rough and challenging. At this stage I was carefully watching Pauline’s reaction, since I had no knowledge of her ability in mountain situations. But the sun was shining, the air was clear as a bell, we could see the trig point on the summit, and it looked as though, if we reached out, we would be able to touch it. Pauline was not fazed, thought it looked much easier than she had expected, and I knew I was going to have to grit my teeth and get on with it.

For some years I have not gone up the official rocky route because my knees do not bend like they used to, and I do not have enough muscle strength to get up the big rock steps, so I go off left over tussocky, but steep, ground. I pointed Pauline up the official rocky path so that she would get the full flavour of the route! Then, where the gradient eased a little on my route, I moved back right to re-join her and we followed the rest of the rocky path to the summit trig point together. The views were wonderful, and the sunshine superb, though there was a significant breeze, right on the summit.

Whilst I was getting my breath back, Pauline decided to attack the trig point and with a bit of a struggle was soon sitting on top. There was a significant breeze blowing right on the top, and I was getting worried that she might get blown off onto the stone slabs. My concerns were ignored, and with a bit more struggle she then stood up on the top with a big grin on her face, waving to me. [Some time later I learnt that in her youth she and her sisters had all tried to stand on top of a single trig point together! Madness!! I decided not to worry any longer.]

The standard way down is to reverse the rocky ascent. But that was out for me, as was descending my ascent route. Variants of these are possible, but I decided to aim for the Dave Rowland stile, then contour round to join the ascent route. But finding this stile is not easy, even if you know where it is. The ground on this side of the summit is so convex you cannot see the stile until you are almost vertically above it. Pauline was following my instructions, but moving faster than I down the very steep slope, so was in front. At this stage suddenly the boot became on the other foot, metaphorically speaking; Pauline was warning me that the ground was very steep, that I needed to take great care otherwise I might fall and roll down the slope, banging against rocks on the way! I was well aware of this, of course, hence my slow and careful descent. However, I was learning that I do not need to worry about Pauline; she is starting to worry about me!

After re-joining the gentle ascent route, now in descent, down to the metal gate, we decided to vary the route by branching off right, over frequently boggy ground (but dry on this occasion), then down and over Buxtors Hill, with views of the Cat and Fiddle, then more steeply down, and back to the carpark.

For the record:  Two summits, total distance 3.25 miles with 525 ft of ascent. It was rewarded with a pint at the Stanley Arms on the way back to Macclesfield. In retrospect, I have wondered how I managed this. I was a bit knackered at the top, but relaxed and OK on the way down. It must have been the weather – I think I must be solar-powered! 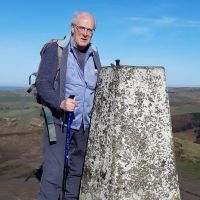 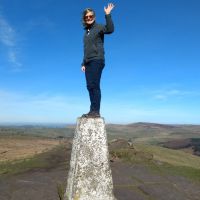