In August 2019 six members of the Karabiner Mountaineering Club are embarking on an expedition to the virtually unexplored mountains of Western Zaalaisky in the area of the Tersagar pass in the Northern Pamir Range on the Kyrgyzstan / Tajikistan border. This is a high profile trip, associated with the 75th Anniversary of the founding of the KMC (and co-incidentally the 75th anniversary of the BMC) which has attracted cash sponsorship from the Karabiner Mountaineering Club Expedition fund, Mount Everest Foundation, the Montane Alpine Club Climbing fund, the BMC Expedition fund, and the Austrian Alpine Club (UK) Expedition fund.

We would like to warmly acknowledge the key role that the Karabiner Mountaineering Club Expedition fund has had in making this expedition possible. The club fund was the first of the funds to confirm support, and this was undoubtedly a factor in the success of obtaining the other grants, some of which have considerable prestige.

The team have a broad range of technical skills and experience – all team members have significant Alpine and Scottish Winter experience, most have continental Ice Climbing experience and most team members have previously undertaken other expeditions to altitudes ranging from 5500 up to 7000 metres, and both Andrew Vine and Steve Graham having previously been on trips specifically for first ascents to the Greater Ranges. This endeavour will therefore provide an opportunity for all team members to broaden their mountaineering experience and gain increased confidence in undertaking and leading true exploratory expeditions of this nature.

We hope that the skills both learned and augmented will facilitate further exploratory club expeditions and climbing in the future, and that these skills can be passed on to the next generation of Karabiner Mountaineering Club members.

The KMC team will author a report, articles for newsletters, websites, blogs and journals, and will prepare a lecture for the Autumn-Winter of 2019/20.

The exploration of the Eastern part of the Zaalaisky Range started in the beginning of 19th century with various expeditions from the Russian Empire and these were continued into the first half of 20th century by Soviet expeditions. Lenin Peak (7,134m and 75km east of our destination) was discovered in 1871 by the Fedchenko expedition and first climbed by a Russian-German-Austrian expedition in 1928. Exploration of the Kyrgyz side of the Pamirs continued sporadically and has gradually expanded outwards from Lenin Peak and the Korzhenevsky glacier, picking off the highest and most obvious peaks then the lower ones. In this part of the range there are very few first ascents left to be had.

From around 2000, alpinists started a more intensive exploration from the Kyzart pass eastwards (the far eastern part of the region). As of 2018, the western part of the Zaalaisky (west of the Tersagar pass), which forms a long border with Tajikistan to the South, remains little explored by climbers or trekkers and from our extensive research it appears that the sub-range offers a good number of unclimbed peaks at an altitude of 4000-6000m. 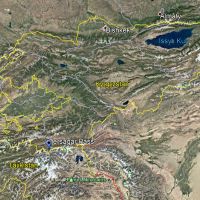