We climbed together a few times. Always had an infectious laugh. Last met him in the Vaynol Arms. No different to how I remembered him in the 70's. A very neat climber with an impressive c. I remember doing Pause on the Etive Slabs and he got the big unprotected pitch led in fine style. Such an enthusiastic character who will be sadly missed. Picture is a distant shot of Alf on Spin-up, on Falcon Crag in Borrowdale, circa Sept 1973
By Sean Kelly

So sad to hear about Alf. A great Climber. Many Great days together on the hills and cliffs. Pictures are from the mid to late seventies of Alf leading Suicide Wall, Idwal.
By Dave Tracey

I am saddened to learn of the death of Alf Gleadell who I knew well and who was so much respected by members of that era, so important for our Club. It might be of interest to those older members, who, like me, knew and climbed with Alf, to know that in the middle pages of the 50th  Anniversary Club Journal (1994) there is a top quality photo of him with John (Whacker) Whittle (no longer a member), both in grit-stone climbing mode, and who had both climbed 130 grit-stone routes in the day! (See below)
Sponsored climbing at Stanage, 1974: Alf Gleadell and John 'Wacker' Whittle, each soloed 130 routes in the day (photo: D Seddon)
By John Wild

When I think of Alf what comes to mind is a wizard’s shock of red hair, him laughing, always laughing, cradling a pint pot in his arms, delivering one of his irrefutable aphorisms. “You can have any drink you want as long as it fits into a pint pot.” This was to a hapless newby who had just ordered a cocktail in a Manchester pub.
By Gavin Anderson 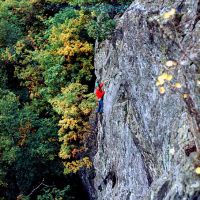 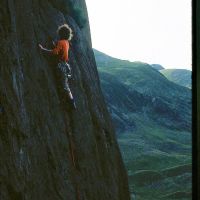 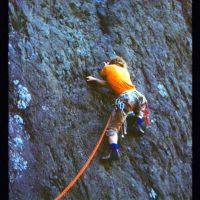 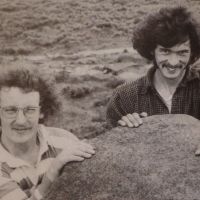