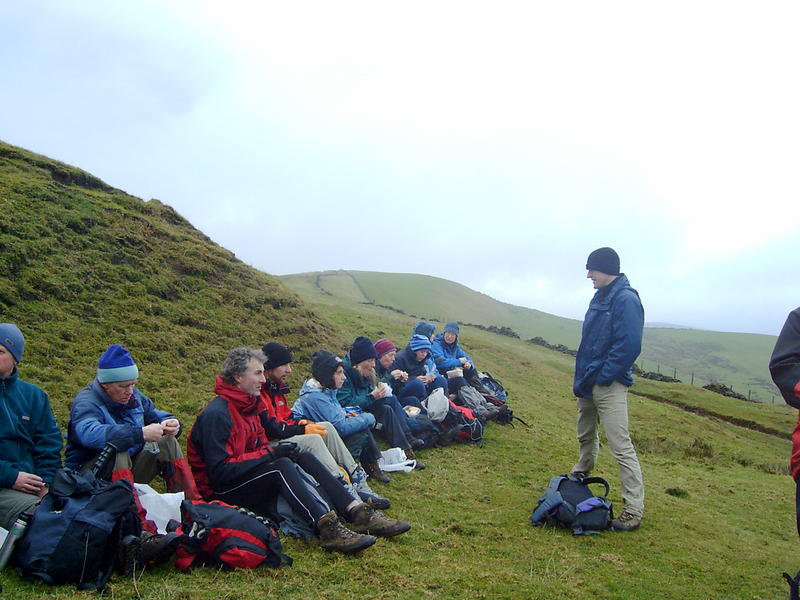 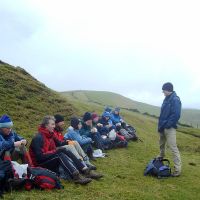 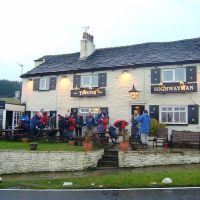 This meet has become an institution and on the previous two weekends when I was doing my recce in rain, mud, wind and frost I was beginning to think that is where I should be. But how wrong can you be. The day was wonderful and the sun shone on us. Ok it was only briefly, and it only rained once.

A detour early on in the walk made sure we did not get to the pub too early. Great timing as the rain began 50 m before the Highwayman Inn. A few well chosen words to the landlady's father who was power washing the tables in the rain and we were granted entry. A haven of Christmas decorations, real ale and puddings to die for (only Roger and Karen were seduced ? by the sweet menu of course). The hostelry was given the seal of approval by the Aldermen of the KMC who checked if it was open for lunch on Thursdays.

Those of us who resisted the menu in the pub had a pleasant lunch, taken in the shelter of a crumbing stone wall - sorry about that Iain but I only touched the wall - honest. Lunch at the Common Barn tea rooms was briefly contemplated but the tractor pumping slurry from the cattle shed was all the excuse we need to save a few bob.

With the wisdom of local knowledge and several meet leaders the rest of the walk was successfully navigated and the worst of the mud and swamps avoided. The only trouble in the ranks was quickly dealt with by Miss Discipline with a few sharp slaps and the friskiness abated.

Our welcome back at Len's was like that for returning heroes. Plenty of soup provided by Ethel Hallam and enough cakes to run a shop courtesy of Pat Holt. Len was eloquent in praise of Ethel who insisted on carrying on a tradition that she and Eric had been so well known for. Pat in her usual fashion refused to take anything to recompense for all the wonderful baking so the Len Stubbs Old Cap collection went to Hut funds.

Thanks to all who turned up and a special welcome to our new guests Karen, Roger and Susanne. Very nice people but obviously unaware of the KMC tradition of losing new people on walks.