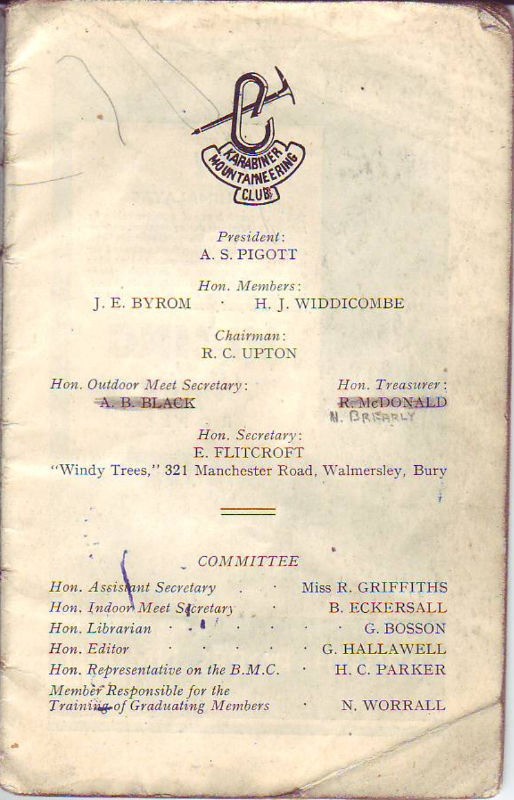 Toni Nicholson, who was a popular and well known figure in Northern climbing circles in the middle 1940's suggested, in the Autumn of 1944, to some of his young Manchester friends: Geoff Cockcroft, Sam Simpson, Cliff Wood, Len Stubbs, Bob Elliot, Norman Worrall and a few others, that they might like to form a Manchester section of the 'Peak Climbing Club', a recently formed Sheffield club, in which he was very interested. The idea that Lancashire climbers should ally themselves to a Yorkshire organisation was repugnant, and after a lot of weekend talk at Laddow, the Downfall and Edale, it was decided to form a completely new Manchester club. At Edale that night a name for the Club was discussed and one suggestion was 'The West Lancashire and North Cheshire Speleological and Rock-Climbing Club'. This was quickly dropped as everyone got bogged down with the initials. Another suggestion came from Don Hoyle. He said, "How about 'Karabiner Mountaineering Club' because the initials have a nice ring to them?" A short period of muttering then ensued while everyone tried them out, and the matter was decided. The Club thus came into being on 11th November 1944 with a name, a handful of prospective members and nothing else.

A programme of outdoor meets was also drawn up and Eric Flitcroft said he knew of a printer who could make a proper 'meets card' for us. He was therefore elected Secretary. "Plumber" Worrall was elected Chairman because it was his house they were meeting at, and Len Stubbs, whose leg was in plaster due to a fall on Tryfan, was elected Treasurer because it was thought unlikely he would be able to run off with the money. Thus do some have greatness thrust upon them!

A provisional constitution was drawn up.

During this first year, the design of the Club Badge (by Malcolm Howard) was approved and its appearance was greeted by the full members with delight; the constitution had been drawn up; the membership rose from ten to thirty-six; newsletters made their appearance; lectures were arranged; and most important, a new active and virile organisation rose from the debilitating lethargy that surrounded post-war youth.