Clay teeters towards the tricam on Three Notch Slab (VS) (Photo: Daniel O'Brien) 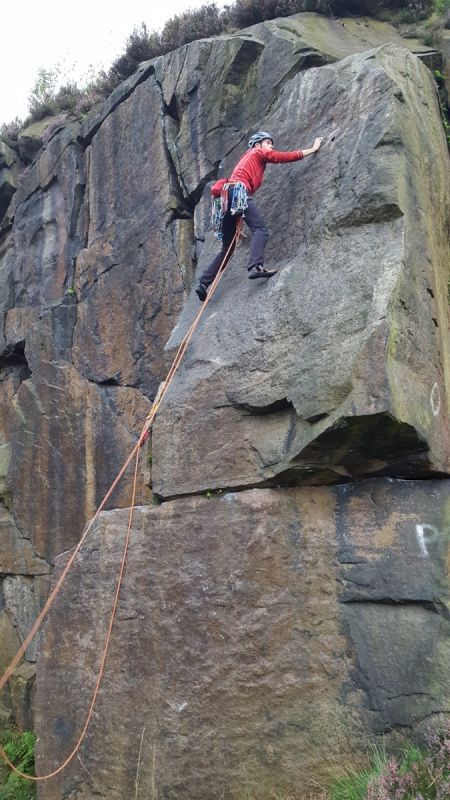 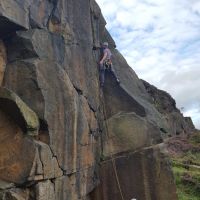 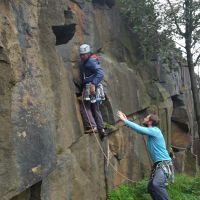 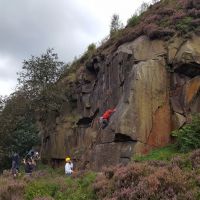 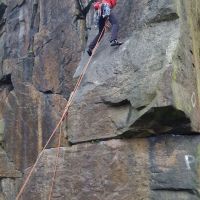 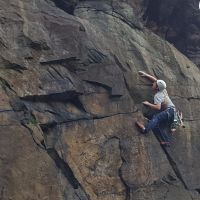 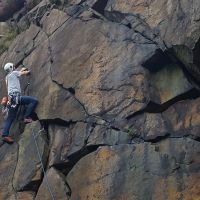 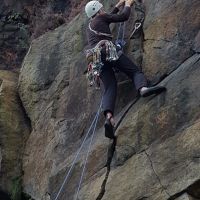 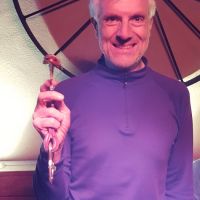 Our suspicions were first raised when the until recently rubbish-filled hole-in-the-ground known as Den Lane was nominated last week by El Presidente, only for him to disappear off to the Swiss Alps.  Luckily, the local midges turned out in force in his stead, though their names are not recorded.  When your corespondent pointed out that some others must have voted for it James M said “Yes, but we didn’t realise what we were voting for…”  Now where have I heard that before?

Undeterred, James D climbed Orchestral Crack (HVS), a steep corner with a very tenuous top-out to an old piece of mangled metal and a bolted lower-off.  After a couple of rests on the steep final crack James fashioned a belay and lowered off removing the gear.  Hannah and Nick followed and then abseiled down.  Dave exacted revenge on Ash Tree Direct (S) which delivered all it promised (being a route that climbs direct, to an Ash Tree) which had defeated him on a previous visit.  Amy, Esmira and Tom followed him and the route was also led by Elliott, followed by Ryan.

Dan led Three Notch Slab (VS) with a tricky start (try pulling really hard) and a bold finish (unless you have a Tri-Cam).  Clay provided the Tri-Cam and Dan was followed by James M and Elliott who all managed to get on the small ledge below the bolted belay.  Clay also led the route though with much less faff, followed by Duncan and George, who also teamed up to climb Sunset Crack (VS).   James M led Elderberry Slab (VD) followed by James D which he described as “grotty”.  Apparently it also lacked Elderberrys…  By now the midges were descending…

Over on the taller side of the quarry James H led Noah’s Crack (VS) followed by Pati.  Neither of them had anything positive to say about the route and especially the descent which looked almost as hard as the route if you shun a short abseil.  Super psyched James also climbed The Wilter (E1) which keeps a small pile of rocks at the bottom as testament to the fragile nature of parts of Den Lane.  After figuring out a tricky top section which the guide suggested might be "easier for the short” Pati followed to an ageing stance and they retreated by abseil.  Still keen they attempted Popple (HVS) which the guidebook described with a memorial at its base however this was not there thought the remains of a concrete plinth could be seen.  Shunning the guidebook description James did battle with the upper crack avoiding some of the more helpful holds out on the right resulting in some airtime and ultimately an irretrievable wire.  Pati followed grumbling about jamming.

Dave finished the evening climbing Sunset Crack which had a straightforward start and a hideously tricky (if well protected) finish.  After trying left, right and straight up to surmount the final steep section Dave resorted to “French Free”. He eventually gained the belay on the right and was followed by Amy, Esmira and Tom who showed contempt for the rampaging midges which had, by this point, driven the rest of the KMC into the welcome shelter of the Waggon Pub in Uppermill.  Unfortunately, the abseil retreat was prolonged until well after dark as Dave and James H dangled on their respective routes; Dave trying to remove a stubborn friend and James still wrestling with his stuck wire. Dave won, James is a nut down…

In the pub the nominations for next week were Horseshoe Quarry, Troy Quarry and Windgather (this late in the season it was agreed that repeat nominations would be allowed…)  The voting was simple with Horseshoe eliminated first and Windgather winning the run-off.  The promise of a light breeze to blow away the midges seemed to be the biggest selling point.  There was a small commotion as some of our number arrived after the voting.  Dave complained that the vote was not quorate as there was only one Dave…  The appeal to ACAS is ongoing.