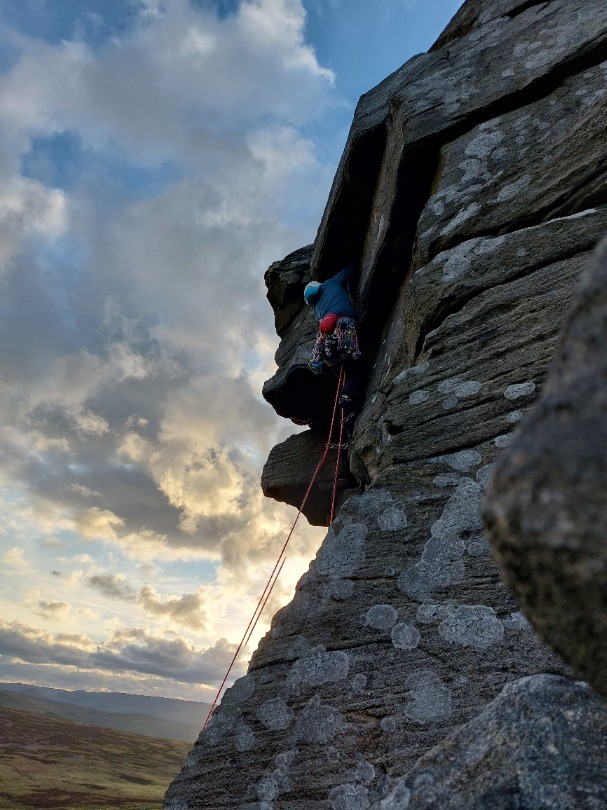 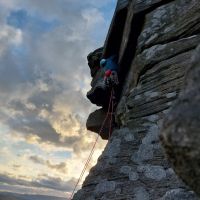 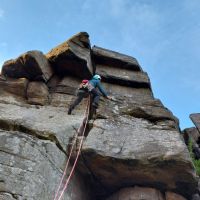 As promised the sun was shining, briefly. It was also raining briefly, but that didn’t matter because it was so windy that the rock was still drying faster than it was getting wet. The seemingly hurricane force wind was keeping the midgies down wonderfully and the general weather outlook seemed to have kept all other climbers at home. And so on the one day of the year when we had the whole of Stanage Edge to ourselves and could have climbed on any section in absolute tranquillity ten of us trekked out to one of the most remote parts, Crow Chin.

The combination of the remote position and the wind (did I mention it was windy?) really added a wildness to the climbing. The risk of being blown over making the delicate, balanced moves slightly harrowing and the continuous buffeting and wind noise making it hard to focus. It all added to the challenge and either everyone was enjoying it or had to keep climbing to stay warm because a remarkable number of routes got ticked as follows:

As the evening progressed there was some exploration of other sections of Stanage North with routes climbed on six areas in total. Climbing was wrapped up by around 9pm and we were all back to the cars before it was dark. Another great evening with the KMC making the most of every opportunity to get out on the rock.

Thanks to David and Andy for a great venue suggestion. David had told me on the walk in that he had not visited Crow Chin in a “long time” so must have been having some sense of déjà vu prior to Andy remining him that they had climbed there in October last year!

Apologies again to James and William who asked for a pin drop on Google maps to locate the rest of the team. You arrived before I saw the message so I guess you figured it out!

Well done to Brian for some great routes on only his second session of leading.

Thanks to everyone who made it out. See you all again soon.