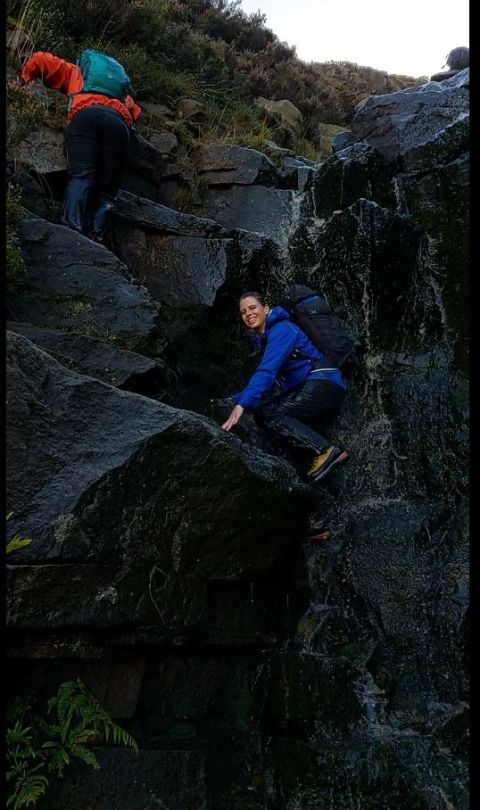 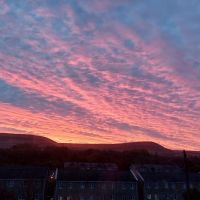 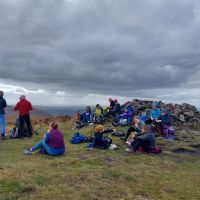 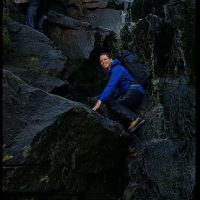 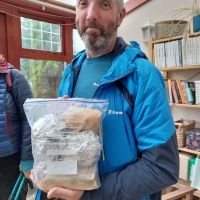 A great turnout of 23 members and guests turned out – just as well given the quantities of cake to be scoffed!

We had a slightly earlier start than the social walk group and set off apace along the Tame Valley Way (old railway line), then up to Moor Edge Road and along the Oldham Way. Brian was musing on the idea of the bypass of the wet gully scramble and meeting us at the top. Once we’d followed the line of Chew Brook across soggy ground, boulders and tussocks – slow going – to the base of Wilderness Gully East it was clear Brian was going to give it a go.  It was running fast with peaty water, it was going to be a wet one. We all donned whatever waterproofs we had and those with gaiters felt slightly smug. Some of the holds on the water washed sections were clean and relatively easy, but, as ever the slime, slick and slip of many more greasy stones made for some slow and careful climbing right through the waterfalls – it’s been variously graded as a Grade 3 scramble or even a Mod, and in full blown ice conditions in winter it deservedly gets a grade II, so today, everyone did really well, no ropes required and all safe to the top in tough conditions.

Once at the top we had a first brew and snack then headed off to the top Chew reservoir and turned up Dry Clough striking over the untracked moors down groughs, up heathery rises and across undulating oozing mats of sphagnum moss, eventually arriving at the remote trig point of Featherbed Moss. My planned route took us across more untracked moor to join the well worn but little known track along the side of Hollins Clough – I set off in the right direction (for once!) picking up the track within a few minutes… but our group has split and I only had Brian and Nils with me. An hour or so later we caught sight of Jim and the others who had taken a more direct line across the untracked but relatively dry moor and cut straight to Arnfield flats – they were a good 20 minutes ahead and beat us back to the cake fest… I reckon that was Jim’s main motivation, apart from the fact he didn’t trust my navigation! 22km / 800m. 6.5 hrs.

The Social Walk: as the group the left the house we had a late arrival and a small  milk related incident so the group split, leaving me and Kate to follow, and Philippa leading the advance group. Kate and I were about  20 minutes behind the main group, and as we passed the cemetery, I called to update on our progress, only to discover that they had taken the short route and were already at Buckden Castle. Kate and I fast marched to catch them up and joined the group on the path to Alphin. We had a chilly lunch at Alphin, then head home for tea and cake.

Cakes this year were Tea Loaf, Lemon Drizzle, Chocolate Brownies and provided by Philippa, Canadian Lumberjack Cake. We did our best to eat it all, but in the end there was more than enough for the scrambling party.

Thanks to all who came.