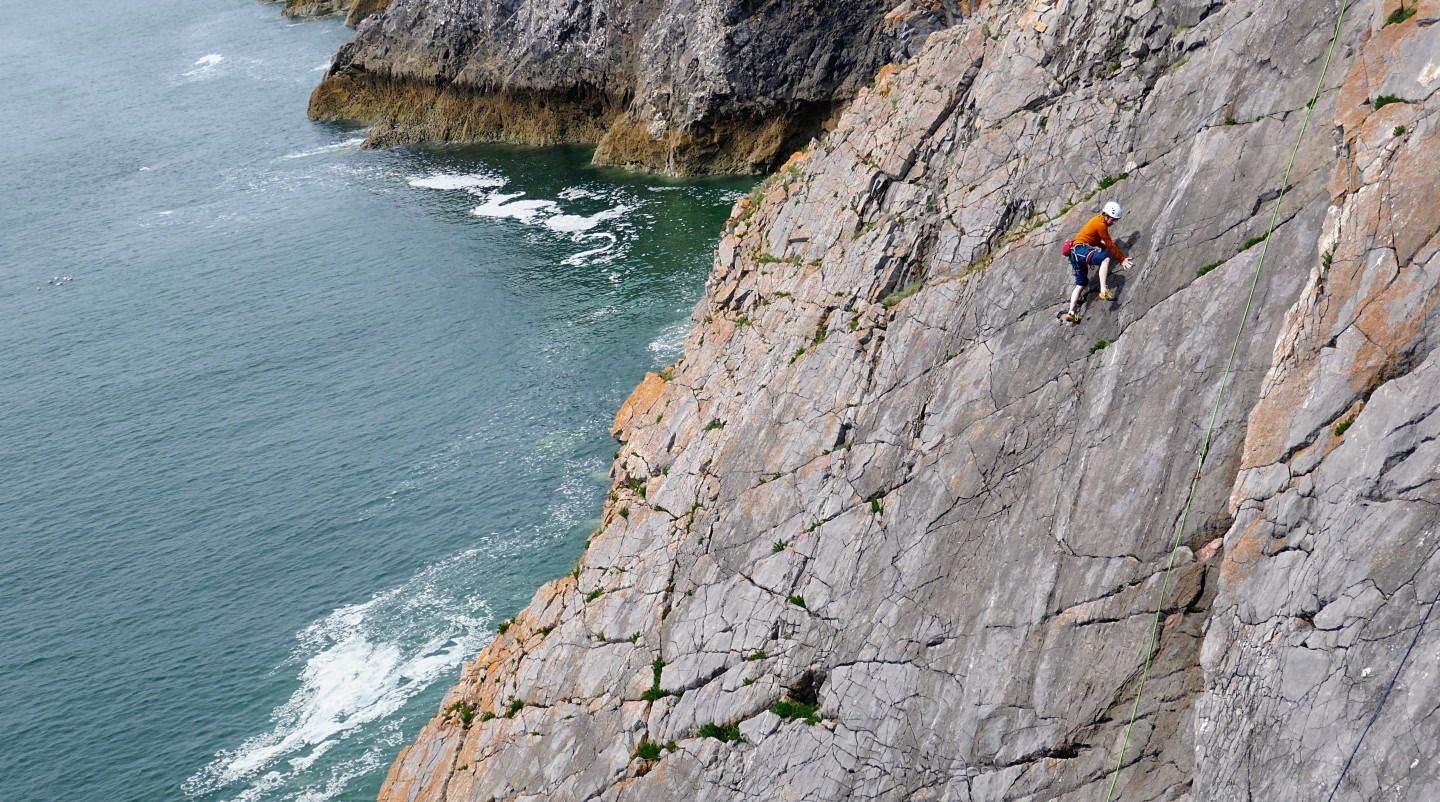 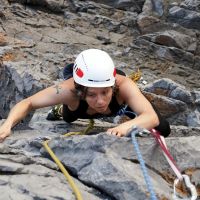 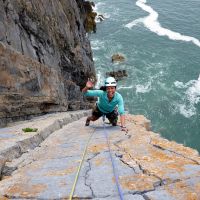 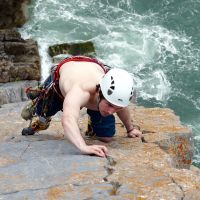 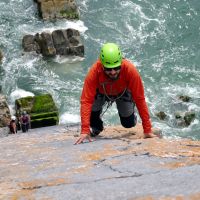 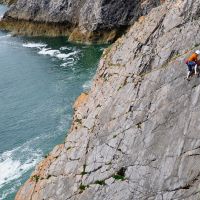 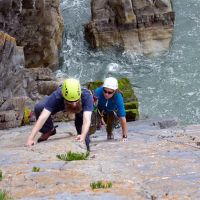 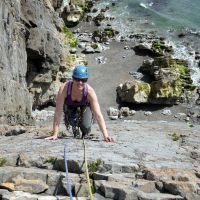 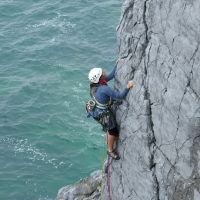 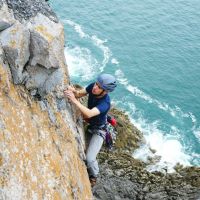 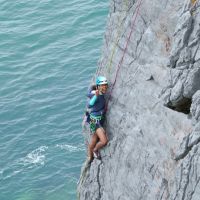 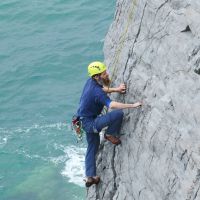 On the last bank holiday weekend in May the club visited Pembrokeshire for the first time since 2012. Fiona and John arrived at the campsite first on the Friday (Gareth and Lucie were already climbing by this point so they’re the winners really), closely followed by James and Jared. Having pitched tents, we headed out to Stennis Head to make the most of the glorious weather. Fiona and John are able to recommend Stennis Chimney (if the tide is low); James and Jared ticked off Hercules and Manzoku. On arriving at the campsite, Dave and Caro were unable to find our tents because they were ‘too big’ and had a sun lounger outside. “That can’t be them”. Luckily Andy turned up shortly after to point them in the right direction. At this point the meet leaders went AWOL to see John’s  parents (free pub meal!), leaving the rest of the team to sort themselves out for the rest of the evening. We do know that Dave led Urchin and Flake Quake (with Caro on second) and Andy also led Urchin, paired with Shaun who led Flake Quake.

Saturday began with unpromising looking clouds and most of the group headed to Saddle Head to take advantage of the easy abseil and non-tidal belay. The initial shower cleared by the time we’d belayed down and the weather slowly improved from there. Various routes were explored, including Infra Red (led by Fiona), Buff (Dave), Nameless Wall (Andy) and Upon a Weather Beaton Cliff (Steve). Disaster struck sometime late morning when a handlebar hold sheared off in Steve’s hand near the top of On the Cusp leading to a big fall and a lot of pain for Steve. It was quickly apparent he had broken his ankle in a pretty bad way. Between those at the bottom of the cliff, we were able to get him down and moved to a sensibly flat spot to lie down. At this point we were incredibly fortunate that another climber (Martin) was an experienced first-aider and dealt very calmly with the situation. With an excellent response from the local Coastguard, Steve was airlifted to hospital 3 hours later. I can only imagine it felt like a lot longer to Steve who, it turns out, might be immune to morphine! This was a sudden and powerful reminder of the importance of taking the participation statement seriously and always going out properly prepared with warm clothing, mobile phones and first aid kits in case of an emergency.

As you’d expect, once Steve had been whisked off to hospital, everyone was slightly shellshocked and had to work out what to do next. Many of us chose to get back to climbing and a few more routes were climbed, both at Saddle Head (Fiona and John) and Newton Head (Dave, Dakota, Caro and Shaun). In the meantime, Jim Symon (who just happened to be in the area) had cleared the route of Steve’s gear and Andy and Gareth headed back to the campsite to collect Steve’s tent and other belongings, including a large plastic bottle of orangey liquid. Andy did a smell test (!) and yes, his fears were well founded. The offending item was duly disposed of and Gareth was very convinced that this paid off any debts relating to carrying gear to the bottom of Ben Nevis, and possibly gave a Gareth a few extra credits on top.

On Saturday evening we all headed to the pub in Bosherston for a meal, bumping into ex-KMC member Cath Sanders, who was there with Leeds Mountaineering Club.

Sunday promised to be a bit damp according to the forecast, although the weather was pretty good until the evening. Dave had a craving to tick off Giltar Slab Route, so most of the group headed over to Penally East. Undeterred by the high tide, we were able to find good belay positions on the cliff. Most people had a go at Giltar Slab Route, which did live up to expectations. At the very least it was led by Dave, Andy and John; seconded by Dakotah, Caro, Lucie, Fiona and Clay; and soloed by Jared (three times) and Shaun. Other routes included Zawn Corner, Giltar Crack and Central Corner. We all made our way back to the campsite in the evening for a pretty successful barbeque, under a tree to avoid the drizzle.
Monday saw most folks back at Saddle Head for a route or two before heading off for long drives home in the early afternoon. Infra Red, Flake Quake and Nameless Wall all made another appearance, Clay led Limbo on next-door Stennis Head, and Fiona led Sea Mist, second by Dakotah and John. Another route to be highly recommended.

All in all, a successful meet with a respectable amount of climbing done and Jared’s promise of good weather was just about upheld. Steve is planning to circulate something to the club in the near future with some more details about his escapades, and this will hopefully include info on how folks can make a donation, should they wish, to support the Coastguard volunteer teams who helped us out so much.