What a day! Cold, deep blue sky, loads of sun a few inches of snow, who would have believed that in January!

I turned up in Duncan's van as my car failed to start and at the appointed time no one had turned up at the Popular End. Soon Ian C and Scott drove up, they had been to Hathersage for breakfast after biving in Robin Hood caves. Once Ian R had introduced himself we headed for the other end.

The question on my mind was how could we get everyone up the 14 routes in the order listed. And one idea was to treating it like a single multi-pitch climb, where each route was to be led by a lead climber everyone else seconds the route, the first two seconds set up the next climb and so on.

Proprero's crack was the first route, unfortunately it was almost in perfect winter condition and it would be an hour or two before the sun would come onto it As none of us had axes and crampons, lets face it its Stanage, we sent up our most experienced climber It was soon clear that Duncan was going to get hurt and there we failed at the first hurdle and the rest of the day became a free for all.

I had a go at Doctors Chimney the next route and soon failed blaming a mystery ankle injury which seemed to amuse many, Ian C put me to shame and led it followed by James. By this time the group had got bored and moved on to the next buttress which was in the sun shine, the rock was warm but had an exciting snowy finish. Accusations of deliberately setting off avalanches on to lead climbers ended in a mini enactment of the defence of Helms Deep with both Kevin and James being the main targets of the bombardment of snowballs from up high.

Steadily moving from buttress to buttress but not necessarily climbing we finished on Helfensteins Struggle and what a struggle Ian had! Dropping out of that hole a number of times and discovering how sickly the hot aches can be. By the time I'd followed Helfensteins Variation, most where heading straight to the 15th route for a pint of the best in front of the artificial log burning fire and Kevin's wet socks.

A great day, but the challenge it still there, see me in the pub on Thursdays if you're interested. Below is the list: 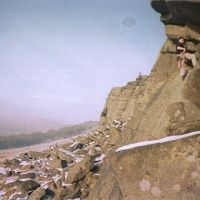 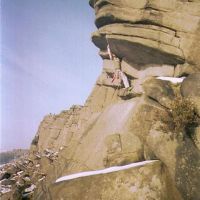 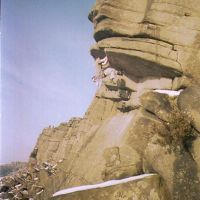 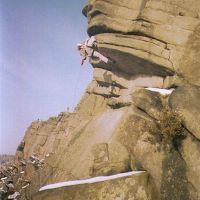 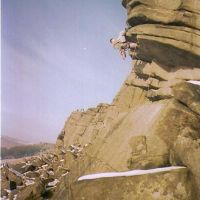 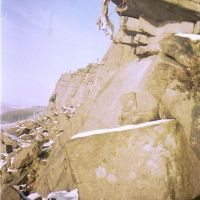 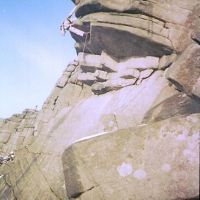 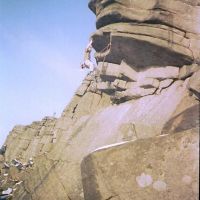