Present: The Mad Hatter, Humpty Dumpty, Alice, The Cheshire Cat + possible sighting of the Bandersnatch. Lots of the King's (KMC's) men and women (fortunately they didn't need to put him back together again), sorry your names were not recorded.

A day greyer than most dawned... Spring was not interested in a KMC meet, but the Mad Hatter certainly was! "why not have a tea party" Stove, water, tea, date slice and fruitcake were dutifully dragged to the foot of Birch Tree Wall and a steady stream of KMC'ers strolled around the rocks waiting for the rain to start, but the rain may have been in Gloucester (ask Dr Foster!). Contenders:

Humpty: The meet leader, falling off Right Hand Crack as a result of laughing too vigorously at Joe (dangling) and Lester trying to remove a well-placed camming device. A second before this I had clipped a well-placed hex, and Mr Wylie was paying attention, so I merely dangled as well!

Mad Hatter: Probably Al Metelko for making the effort to lead Hatter's Groove, I was informed of dampness.

Cheshire Cat: Dan O'Brien "I've just soloed an E3!" Quite a grin it was too!

Alice: Difficult to say, but could be Mauriane, a parka-wearing Belgian who hasn't been sighted since. Claimed inexperience but seemed to cruise up various VS's!

Bandersnatch: A greyish, gorilla like creature swinging around the Cubic Block, very peculiar. When pursued it fled at high speed (in a green campervan!).

Humpty said Brimham's a fine crag, well worth another visit. Tea? Yes, the party will hopefully become a regular feature! Thank you kindly, all who attended; plenty of climbing was done in spite of the initial chilly dankness, good effort folks!

OK folks, come along to some top gritstone routes at Brimham! A friendly spot (the place, possibly not all of the climbs!), it could be a winner! Excellent climbing on an unfamiliar crag. At Brimham Rocks you can find five three star gritstone VS's: Brich Tree Wall, (mad) Hatter's Groove, Allan's Slab, Rough Wall and Right Hand Crack. From VDiff to E4 there is worthwhile climbing and various funny shaped things including a dancing bear! Barring a weather disaster I will be in the Birch Tree Wall area at 10am, I will have tea, cakes and maybe no skin on my hands. The grid ref. for the crag is SE 209 637.

"From the centre of Summerbridge, which sits astride the B6165 Knaresborough to Pateley Bridge road a steep winding lane leads up to a crossroads, beyond which lie Brimham Rocks and its car parks"

Hope to see some folks there! 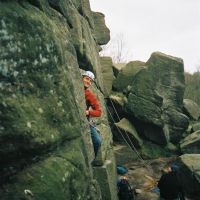