Another very good KMC response to Len's kind invitation to hold a Kettleshulme Meet, reminding him that the club he helped to found in those post-war years is still prospering and repaying his continuing interest in its affairs.

The walk was blessed with a day of sparkling weather and seemed to be deemed about right in length and pace, taking a figure-8 route to revisit some old haunts along and adjacent to the Taxal/Windgather/Goyt/Shining Tor/Cat and Fiddle axis. People were free to exercise their own options as to timing for the return leg, with a few even diverting for a swift Windgather route en route. As promised very little bog was encountered despite the downpours of the previous day. Everybody safely gathered at Paddock Close as darkness fell to continue conversations in the warmth while enjoying the splendid commissariat so ably overseen by the generosity of Len, Ethel, Pat and Richard. News and memories were exchanged in a friendly atmosphere as the day drew to a close.

Len Stubbs, KMC Founder Member will make all and sundry welcome once again at No.1, Paddock Close. Please park carefully and with consideration for the neighbours in Paddock Lane.

Leave Paddock Lane opposite The Bull's Head, turn R then bear L to Fivelane - ends GRef.SJ992787. Fork R to Dunge Farm Hidden Gardens then S across fields to road at GRef.SJ989766. Steeply E up road to Pym Chair then SE to stile at GRef.002761. Continue SSE along top of Foxlow Edge then cut back R then L to reach ruins of Errwood Hall at GRef.SK008748 (alt. low-level route via the Shrine if weather is wild). From Hall, head E then S to go up Stake Side to reach stile at GRef.SKOO1732 (alt. route to this point by direct ascent up Shooter's Clough if needed), then a further 1.5 km to Cat & Fiddle (optional drinks stop). Return to stile at previous GRef., then NW to Shining Tor GRef.SJ995737. Continue N over Cats Tor to Pym Chair, 50m R to stile then N again, alongside wall all the way to Windgather Rocks GRef.SJ995783, then on to Taxal Edge. Turn L at GRef.SJ996789 then R at signpost, cross lane and follow path alongside wall to rejoin Side End Lane then gently downhill into Kettleshulme. 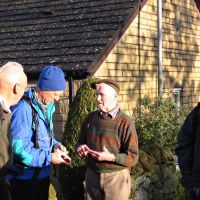 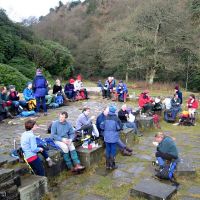