Saturday's awful weather in Manchester probably put a few people off, but my mole in Cartmel (Lester was staying at his Dad's) assured me that it was fine in the Lake District, and there was a fairly good turnout at the Walna Scar Road car park.

With nearly half the group being members of Longridge Mountaineering Club, I am expecting invitations for a reciprocal meet in the very near future!

I had originally intended to walk straight over to the beck, but I was alerted to a little known Grade 1 scramble, The Bell ("More Lake District Scrambles" by R. Evans), hidden away in the Coppermines valley. This proved to be a gem; a good warm up and adding interest to the approach to the main scramble.

After a break at the foot of the beck, we managed to weave a way up by the side of the initial impressive waterfall. After this first section, it was a case of finding interesting ways up the slabs and walls of the beck up to Low Water, depending on how adventurous people wanted to be! Dave Wylie found the best way up the last section: to the left of the beck, a steep, seemingly blank wall revealed excellent holds and friction.

From the tarn, Brim Fell looked quite disjointed, but provided a very enjoyable scramble up a fairly continuous line of slabs, onto the ridge up to the Old Man. There was some talk of a further scramble on Dow Crag, but we settled on a walk over it and down to the Walna Scar Road, and from there back to the cars, and the Sun Hotel.

A spectacular ghyll scramble with some interesting pitches (especially after rain!) up to the tarn, followed by pleasant slab climbing on good rough rock. Various options to follow, depending on time and inclination.

I hope to be at the pub the Thursday before.

PS This will not be as long as last year's epic expedition ! 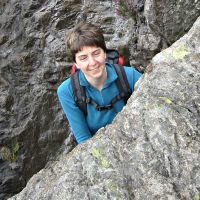 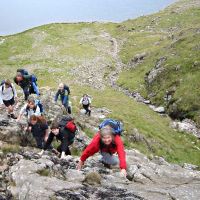 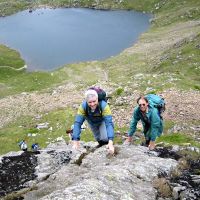 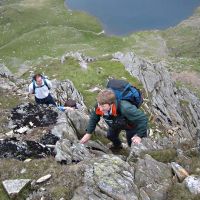 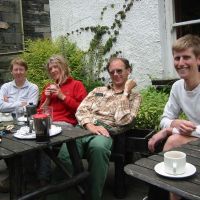