This is an automated email from Dave Dillon. Contained within can be found the Meet Report for Andrew's Kinder Meet. This email will be sent repeatedly until it appears in the Newsletter. (FX. small sort of chuckle echoes from round corner)

Having pulled the shortest straw in the 'Who leads Andrew's Meet' contest the ML was found sitting in Mr Cooper's café with a cornucopia of fresh morning comestibles on order.

At approx 9.31 the ML was hauled kicking and screaming from the Cooper café clutching a bacon butty rescued in the nick of time from the seething cauldrons in the back room. Where upon the McCallum gave ML the eye for starting after the 9.30 deadline.

So began the day, easily up past the Nags Head towards the open land, past gates and other impediments up to the Nab. Here abouts the ML, leading from the rear, lapsing in navigational acumen bypassed the ridge of Ringing Roger, assuming that the main troupe had beetled off on to the edge by now. ML was somewhat surprised to see everyone bearing down from behind.

Moving swiftly on, along the nicely laid stone slabs, the merry band landed at the head of Grindsbrook. Here, sat on the stream bed with lovely stepped seats cleaned by some previous flash flood, we performed the writes of Elevenses.

Thence mooching off towards Grindslow Knoll, ignoring the wails of dismay when the ML pooh poohed the idea of taking the westerly dual carriage way of stone slabs. As the mutterings got louder the ML thought it best to save face by calling a Meeting of Maps. This gave the ML enough cover and bluster to head off confidently to the west and rejoin one of the edge paths heading for Crowden Towers. A re-group at the head of Crowden Clough and quick chunter up to Crowden Tower.

John Dobson, renegade and raconteur, led a few of the weaker willed on a directissimo of the boozer at Edale. Good Feller, I say.

The ML thought it best sticking to the instructions and head straight for Kinder Gates. So with marvellous slight of hand the ML proceeded to march off into the mist, compass held high, with the pretext of knowing the intended destination. This had previously been sealed in a brown envelope before every one and stashed away for future verification. Without wasting time on all that boxing lark, the ML ploughed straight through the groughs and bogs. The mists were getting thick so the ML skinned a passing hare and stuck it on his bonce to provide a more noteworthy land mark for the party to follow. After some time, when the surroundings looked a little more familiar the ML tore open the brown envelope to reveal that the correct destination had in fact been reached. The ML surreptitiously discarded the other 17 brown envelopes. Twas but a simple ruse to regain some navigational face. Onwards, paddling, to Kinder Gates and a quick on site squirm up Dead Bird Chimney. A hastily snuck in cup of juice and onwards, inadvertently leaving Trish to pee in the mist. More paddling round to the Down Fall which was doing just that, as there wasn't much wind blowing.

Move south from the Down Fall, into the home leg now with all to play for. Past Red brook and heading for the trig at (what was once) 2088 the ML, as ever leading from the rear, had the vague impression of being on some sled pulled by approx 13 huskys who knew were they were going. Alas the huskys got wise to this, stopped, demanding more seal meat (or some such). ML was forced to trot off into the mist and deliver the trig point. Luckily, as Dave Wittering was already there, twas just a matter of homing in on the emissions, whilst brandishing the compass for good effect.

ML enticed a few worthies to climb on top of the trig for photies. At last the Edale rocks appeared as we dropped below the white mists. Here the young and the wise tarried a while with a few boulder probs.

The Jacobs Ladder spotting contest was entered by all, though not all were equal in wisdom.

The final hurdle was in Upper Booth were the McCallum, eager for a quick injection of Mother Nature's Elixir of Everlasting Life demanded with impeccable diplomacy that we take the most direct route to the Nags Head were said stuff was on draft at reasonable prices. Who was the ML to mess with such desires?

And so it was that the day ended in the Nags Head supping magic falling down juice, with tales of dragons, white haired individuals, bar maids and sundry. Thinking we were lucky to be alive and thanking Andrew for setting us all up.

Starting from Edale car park (sorry folks it is now £4 for the day so fill those cars up save the environment and ease the pain in your pocket) 9.30 for 9.45 am start.

The route will take us past the Nags Head Pub onto the hills via the Nab up to Ringing Roger and on to Nether Tor & Upper Tor. From here we will traverse the edges over Grindsbrook Tower to Crowden Tower where weather permitting we will head across the peat groughs to Kinder Downfall via Kinder Gates. From here we start back towards Kinder Low & Edale rocks before heading back down Jacobs Ladder to Upper Booth & back to Edale Village and once again past the now open Nags Head Pub.

The planned route is approx. 12.5 miles long but may be shortened dependant on conditions hope to see you all there. 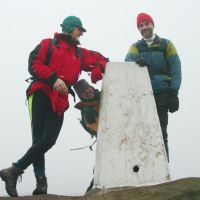 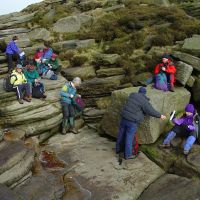 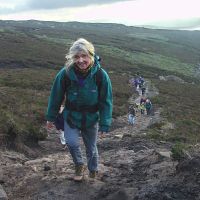 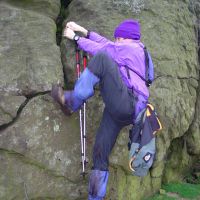 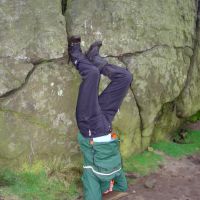 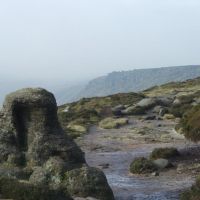 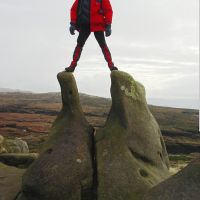 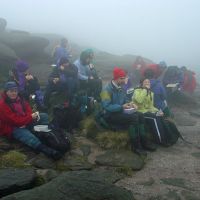 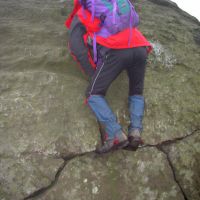