Those who understand these things assured me that they had ordered 'not too hot sunshine accompanied by no wind'. Unfortunately the reality was somewhat different. Whilst it was not actually raining when we left Barden Tower, this was soon rectified and the party was distinctly damp by the time they reached Malham, except for John who had wisely volunteered to drive the support car. However the advantage of poor weather was that the usual bank holiday tourists decided to hit the shopping centres giving us quiet roads.

The undulating territory of Barden Tower to Burnsal lulled the riders into a false sense of security which was quickly dispelled. The pleasure of a substantial lunch at Malham accompanied by improving weather was quickly punished by the assent from Malham to Malham Tarn. The steep ups and downs towards Stainforth were rewarded by the sight of Steve Brough's pioneering attempt at a new downhill speed record quickly followed an attempt at the man-powered flight record.

Better weather and easier terrain gave the riders had a very pleasant ride down the valley towards Ingleton. By this time the party must have looked a sight because as we left the camp site in Ingleton for an evening meal in the pub, we had the riot act read by the Camp site proprietor on the need for good behaviour on our return.

The riders were rewarded by some very nice weather, which was just as well because the assent over Kingsdale was steep!!!. Those enjoying the even steeper decent into Dent were punished with a gated road with a closed gate at the bottom !!! The decent into Muker managed to test a few nerves. However the day's excitement was rewarded by a very nice campsite at Healaugh and a few beers in Reeth.

More fine weather which had to be a paid for by more hills and a strong head wind. Unfortunately the combination fine weather and a bank holiday produced an afternoon of brain-dead drivers. The crux of the day was definitely the 1 in 4 descent into Kettlewell. Rosie decided to follow the instructions and dismount and I only wish that I had read these instructions before I got to the bottom. A pleasant afternoon tea in Grassington was brought to an abrupt end by a sudden and very heavy downpour, which continued until we approached Barden Tower.

Many thanks for all those who participated and to Joe Flynn for sharing the driving and the pain.

The Yorkshire Dales Cycle Way is a 210km circular route on minor roads (map: Harveys cycle route NT10). The plan is to do it in 3 days over the bank holiday weekend, covering about 45 miles a day, so that it is within reach of the unfit, with plenty of scope for the super fit to add extra miles.

The route is suitable for road and mountain bikes, although young children and those whose bikes have no gears may find it necessary to walk up the occasional short hill.

Panniers are not necessary because this is a KMC "cycling for softies" touring event - you can coast along on an un-laden bike because a support vehicle will be available to transport all personal and camping gear to next camp site. It will also recover breakdowns including cyclists who are totally knackered. 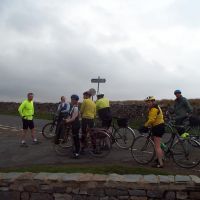 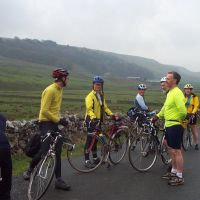 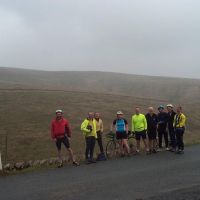 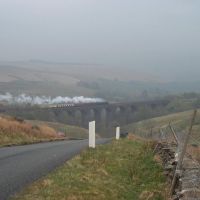 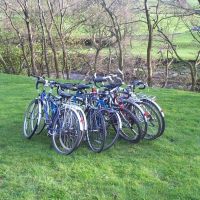 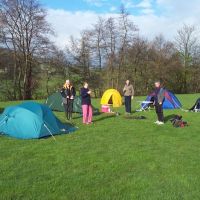 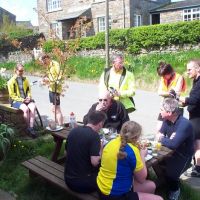 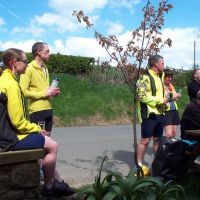