We all met at 10.30am on Saturday morning on the top of the Snake Pass in the drizzling rain to complete the daft plan of attempting to climb on every crag on Kinder Scout.

By the time we got to Mustard Walls the rain had stopped, the northern edge looked un-green and dry. Roger attempted to start Knapp Hand (HS 4b) while Dave attempted to start The Slice (HS 4b), both ended up doing alternative starts and we put the crag down to a bad starting place.

Somewhere that might have been the Brothers Buttresses (but wasn't) involved various solo's of an easy slab. Once we found Brothers Buttresses it involved a mass ascent of Barbara (VD *), the routes were improving. On Eureka Buttress Dave led Eureka (VS 4c ***) while Roger squirmed up Ashop Climb (HVD **).

Gary now had to head home to his son's birthday party while the rest of us headed off to Misty Wall. I lead Misty Wall (VS 4b? ***), while Dave lead people up a Cloudy Wall (VD) further left. Then Dave did Magic Wall (VS) which involved a struggle. John and Joanne now headed off home. John was happy that he had now learnt how to squirm and struggle. This was Joanne's first time out climbing, I hope I haven't put her off too much (she was still smiling at the end of the day despite a hole in her trousers).

The final four of us headed off to Chinese Wall for the last route of the day. Roger led Communist Route (VD) and Wavey lead Nationalist Route (HS 4b) while the midges feasted. After hastily packing we headed off across the moor to bivi on the southern edge. Three of us ended up above Nether Tor but we had no idea what had happened to Roger. An hour later after several phone calls we located him and finally he located us, after revisiting the northern edge and the top of Crowden Clough (and who knows where else). This at least provided an easy tick of a route on "Ringing Roger".

Several bottles of wine later (without mentioning the whiskey) we had a decent sleep on a bed of heather and awoke to the hum of midges. Roger and I were up first and decided to get a route in while the other two slept. Roger led Nose Climb (S *) on Nether Tor. When we returned Wavey had the kettle on and we all spent a couple of hours eating breakfast. At some stage Mark Ashley turned up, he had been bivvying at the far eastern end of Kinder where the midges had enjoyed the meal.

Finally the wind picked up and we headed off to Upper Tor. Wavey lead Upper Tor Wall (HS 4b ***) and I lead Hiker's Crack (S 4a *). It was clear at this stage that we were hopelessly behind schedule so a group decision was made to miss out the four crags the five of us had climbed on last year. As water had run out (Kinder was very dry!) and the next crag was Kinder Downfall we headed off to locate Kinder River. Before locating the river we managed to locate the legendary Kinder tree. Once at the river with canteens full we set up camp two at Kinder gates, while the water boiled we all soloed a small green chimney.

After cake and tea we headed down to Kinder Downfall: I lead Zig-Zag (VD ***) and Dave lead Chockstone Chimney (VD). By this stage the wind had really got going and the midges didn't stand a chance, instead it looked like it was about to rain. With only two crags to go we marched on to Upper Western Buttress. At Upper Western Buttress various solos were performed of Pedestal Climb (D *) and South Wall (VD **) before we continued our march to Mill Hill Rocks for the final routes of the weekend. Roger struggled up the off-width Mill Hill Crack (VD) while Wavey fought with Gregories Route (HS 4b).

We finally got back to the cars after the never ending path back to the top of the Snake Pass without a drop of rain and all of the midges blown away south. We beat a hasty retreat to The Globe for curry and beer.

Those Routes in Full:

Our second attempt to do a route on every crag on Kinder in a single weekend.

Top of Snake Pass, small walk in, do Northern Edge first and head to Edale for beers in the evening. Possibility of free taxi for camping gear from Snake Pass to Edale for you. Those made of harder stuff will choose to sleep out under the stars.

If no car drivers are going or if people are concerned about leaving their cars on top of Snake Pass overnight, we will then start from Edale train station.

Crags to climb at:

Nether Tor
Nose Climb (S), Moneylenders Crack (VS 5a), Flash Wall (VS 5a), Bertie Meets Flash Gordon on his way to Nether Tor (E1 5b).

1km to Upper Western Buttress
South Wall (VD), Extinguisher Chimney (VS 4c), The Dark Side of the Moon (E3 5c).

within the next 2km

If you still have strength head across the clough to Chinese Wall.

Speak to me on the Thursday before for final details. Looking forward to sunshine and ungreen gritstone! 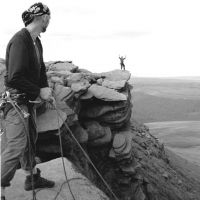 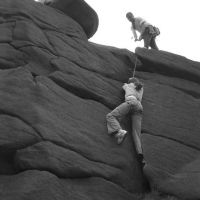 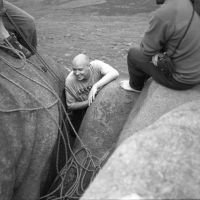 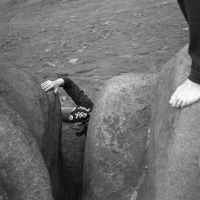 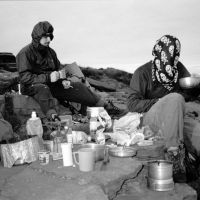 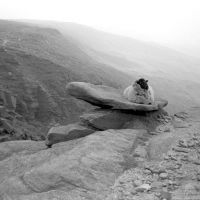 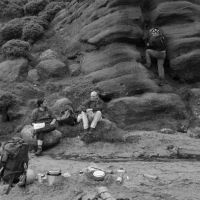 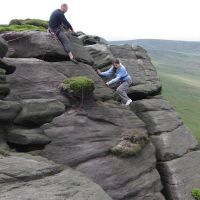 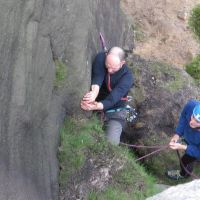 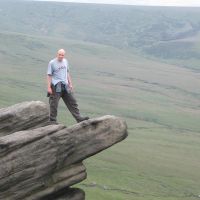 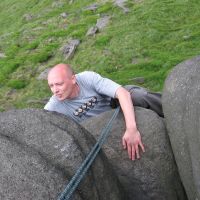 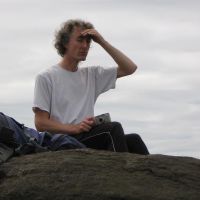 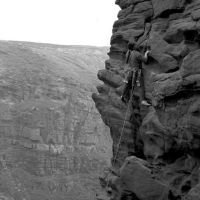 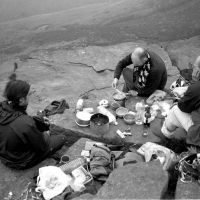 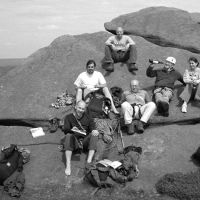