Literary Cop Out Clause: Forsooth and egad, methinks that the bar hath been putteth too high and verily shall I merely recant this epistle in plane prose for fear that the mumblings of my pen shall not compare to the erstwhile poetry which floweth from the quill of Sir Roger, the bard of Ballachulish.

OK Cop out clause over - the winter conditions were in where you wanted them in and out where you didn't. That made it just the job for long walkin's and good climbs with all our wanderers getting safely back home for food and beverages by the side of the cosy fire in the Alex Mac.

There was a fine turn out at this magic little hut with myself and Roger narrowly beating, Robert and Kirsten, Wavey and Trish to the hut - in fact we'd only managed to get the whisky open when in they popped - funny that.

Despite a small crampon-hiring diversion Friday was good and it being so Roger and I headed for the Ben and did Good Friday Route (III). We bumped into club aspirants Liz and Ian at the North Face car park - a pretty hardcore pair they walked in to the Ben with camping gear, pitched by the CIC hut and still caught us up at the crux of the route. Conditions were great - Ian said he had never placed so many ice screws in a day and I only just managed to hold Roger back from leading up a creamy blue looking sheet of ice heading straight up Indicator wall at grade V.

At the same time Trish, Wavey, Rob and Kirsten headed South and did a horseshoe on the South of Glencoe taking the zig zags up Gear Aonach then on to Stob Coire Nan Lochain and Aonach Dubh.

Mark and Michelle arrived later that evening just as we got the whisky open - funny that.

Saturday was to be the Aonach Eagach for Trish, Wavey, Rob and Kirsten but the weekend's forgetting things jinx struck again and a rucksack got left behind. Even though Wavey valiantly wrestled a rabid dog for its lunch, the party fueled only on Eccles cakes and whiffs of Champagne bagger's champagne decided that Buchaille Etive Beag was a more obtainable objective. Fortunately this meant that Trish was ready to return to the hut nicely in time to bake an Easter cake (result !).

Meanwhile myself and Roger gave our tired little legs a rest and took a cable car up to Aonach Mor and still basking in the warm glow of the customer service from the Nevis Range staff we arrived at the top of Easy Gully (I/II) to descend to the routes only to find them a somewhat slushy prospect in the blazing sun. We challenged all things forgotten by starting Forgotten Twin, which was about the only thing in condition and then after a very Scottish £5 note rescue we tried the less travelled area on the South of the Gully. Finding nothing in the guidebook and nothing on the crag but bergschrund and Cornice with a wee bit of ice in the middle we had no choice but to put up a new route up said difficulties: "Bad Saturday Climb" (III) which led up a short ice pitch to overhanging snow and some serious cornice tunneling.

Michelle and Mark were no slackers that day as usual and headed up from Glen Nevis to An Gearanach, then round the Mamore tops to Stob Ban, and down the North ridge back into Glen Nevis (sounds easy when you write it like that but have a peek at the map!).

Liz and Ian did Green Gully (III) that day but camped out on Ben Nevis that evening as we guzzled cake and got the whisky open - shame!

Sunday was Big Ben meets the Easter Bunny. Trish and Kirsten joined myself and Roger on the Ben for a grade three Easter egg hunt on Gardyloo Gully. We'd heard that the ice pitch would be in and as some chaps from Plymouth had abbed off when it got too hard we knew it would be the prefect route to introduce some foolhardy new recruits to the Ben. Not even the sight of a slightly worse for wear Liz and Ian on the way back from their CIC-side campsite put our hardy little crew off and before you knew it we were plodding up hard packed 50 degree snow. The jammed chockstone pitch (that you can often go under) was one great 3m feathered ice bollard, which I got to smash my way up and after a small issue over how much rope was left, Trish and everybody else popped up this and the rest of the icy section to a nice steep belay. From here Kirsten led Roger up the penultimate pitch into a cave under the cornice which gave a suitably thrilling final overhanging obstacle before we all stood on the top of Scotland and whizzed down the snowy col before Carn Mor Dearg arête just as the rain started. Ah - the bliss of that magnificent walkout to Torlundy in the drizzle!

Wavy and Robert decided to have a shorter day and get lots of firelighting practice in after romping up Bidean garlic-nan Bean and spying out a few crags for summery exploits to come. Mark and Michelle headed east to try and avoid any worsening weather, and got blown around on Meall nan Tarmachan, above Loch Tay.

There was Stilton and whisky that night and we were all there to enjoy it.

Perhaps we had plans for Monday but the weather had others - the drizzle was by now well and truly in so after going to Nevisport for breakfast and to take the crampons back we went to Nevisport for 11ses and then began the drive South while Mark and Michelle headed of for some skidding around in Perthshire!

Scotland for Easter - perhaps the best conditions then. 8 places at £5-50 per night were booked at this hut and most if not all had gone at the last count. And all without an advert. 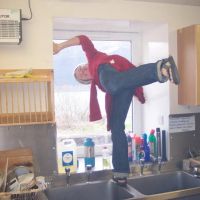 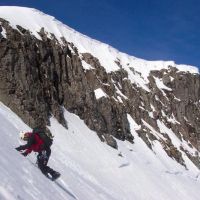 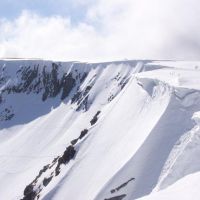 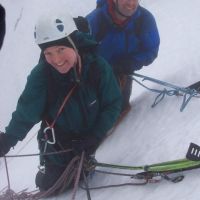 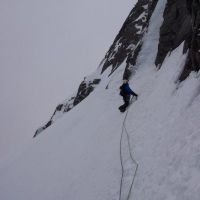 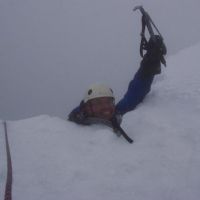 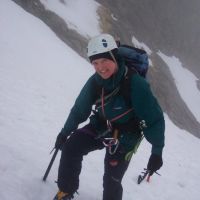 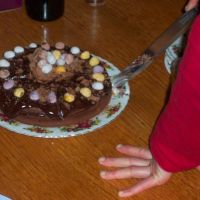 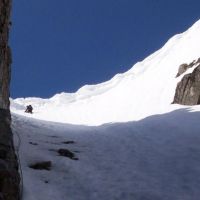 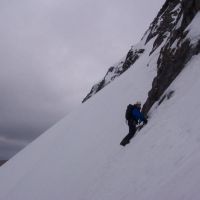 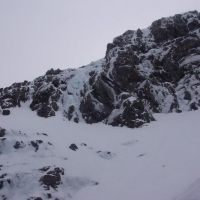 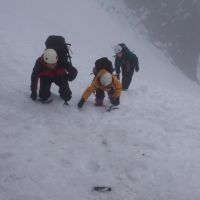 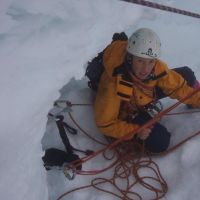 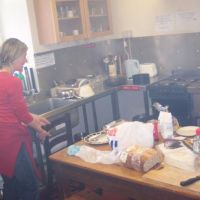 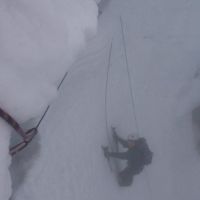