How long is a piece of string? Or in this case a meet. Does the meet start when the meet leader gets there or when the designated date in the handbook is reached? So are those lucky souls already there having fun in the sun on the meet yet or not? We (Vicky and I) on the other hand are sat in a traffic jam on the M6 in the pouring rain having just witnessed a spectacular crash that virtually guarantees that we will miss the ferry.

Thankfully the very nice people at Norfolk Line let us onto the next ferry free of charge so we managed to make it to the campsite in Vicosoprano late on Saturday afternoon as promised, and as expected the meet was already in full swing. In fact, satisfied folk such as Rob and Christine were already down off the hill sipping a well earned cold beer having done the fine SE Arête of Piz dal Pal Tower. Sabina and Sheena had practised their fancy footwork on the Albigna Slabs and Wavey was still trying to explain how he had lost one of the windows from his car in a bizarre strimming accident in Belgium! He assures me that JC was not involved.

An early morning storm cancelled everyone's plans for going up the hill but provided us all with a good excuse to play at making shelters. It is amazing how inventive folk can be with a couple of tarpaulins, an assortment of walking poles and a ball of string. It kept us amused for hours before a trip into Chiavenna to stock up with supplies. After that some people fried on the black rock of Sasso del Drago whilst others rolled into the campsite. Sheena (aka Su chef) provided the evening's entertainment by failing to juggle the tomato based Wop Slop. (Tony and I arrived from a week in Goshenen via some too hot to touch slabs. Ed.)

Fine weather saw everyone out and about with most people taking the ride up the cable car to the Albigna Dam and its surrounding peaks. Piz Dal Pal Tower once again took people's interest with Sabina and Sheena doing the SE Arête whilst Pete S, Vicky and I did Piccolo which shared the previous routes fine airy finish up the arête. Once back at the base of the climb we were joined by the Maplesons for a spot of slab nastiness whilst a marmot scolded us all and Pete W snapped next years winning rock action shot. His words not mine. (Tony and I after food shopping spent the day being bemused by the grades at Sasso Bianco, Chiavenna. Features on route - grade good, no Features - grade bad)

As we all headed back down towards the valley Wavey and Trish were heading in the opposite direction to do the aforementioned SW Arête before finding a nice spot to bivi just as the rain arrived. Mind you it was worse at the campsite, Bowks had arrived.

As the overnight rain continued Sheena declared that "I'd rather go for a walk than go shopping." A statement that resulted in a stunned silence from all but as it happens she did both. In fact walking was one of the main themes of the day. The longest and most arduous effort was by Al and Andy who flogged up Piz Cam in order to acclimatise. A fine effort. Others took things at a more leisurely pace strolling around in the valley whilst others crossed over into Italy and went cragging (superb limestone in the hills N of Lecco). Our hardy Alpinists (aka Wavey and Trish) on the other hand were undeterred by a damp night and squelched their way up the South Flank of Spazzacaldeira before returning to the valley.

Wall to wall sunshine saw virtually everyone heading up to the Albigna Dam and disappearing off to various peaks in the cirque. Dave and Tony visited the Bio Pillar and climbed Snoopy, which they declared to be an excellent meaty little number on a fantastic bit of granite (but tricky to find). The classic Modern Times on Punta Albigna saw a mass ascent by Sabina, Sheena, Rob and Christine whilst Andy and Al ascended the South Ridge of Piz Balzet.

The fine little pointy peak of Spazzacaldeira also saw lots of KMC ascents with the two Peters being the first to reach the summit via the South Flank. Vicky and Bridget did the excellent NE Ridge with the Nigg Variation but there was no variation in Bridget language once gripped. Lots of "technical climbing terms" were muttered and shouted. Steve and I were also on the crag having been beaten to our original goal by the flying, frigging Fritz brothers. Instead we headed off up the adjacent Dente per Dente from which we had an excellent view of the numerous flying demonstrations from our Germanic counterparts. Soon however they were far below as we continued up the NE Ridge/Nigg to reach the spectacular pinnacles of Il Dente and La Fiamma both of which just had to be climbed on the way past. It would have been rude not too.

Unbeknown to us at the time it also reduced the length of time we had to queue for the cable car down courtesy of a modern day Julie Andrews who had thoughtlessly walked dozens of children up the hill! As a result some folk waited hours whilst other lucky souls who would have had to walk down jumped onto cars hours after it should all have been shut down for the night. The cable car operator must have a good overtime deal because he was still smiling at the end of this ordeal.

Yet again the weather was fine and once again a Mapleson was out on the hill. Today was Roger's turn to play out, so as most folk went valley cragging or walking, six of us headed back up to the Albigna cirque where we all ended up climbing on Spazzacaldeira. Mind you, Roger and I had first slogged up to The Tortoise, only to find a team of four in situ doing a fine impression of the aforementioned creature. Thus we followed Dave and Tony up the superb Lasciami-Li after an hour and a half's walking that saw us climbing all of five minutes from the telepherique terminus. Noon saw the four of us sat on the terrace at the top of the route so with so much of the day left we decided to continue up the underrated SE Ridge to the summit and the irresistible slender and highly photogenic Fiamma which we all ascended. Roger even got brave enough to stand up on the top.

Sabina and Sheena delighted in the exposure of the classic NE Ridge whilst all this was going on.

Once again the weather was set fair and once again Spazzacaldeira was a popular venue with Rob and Christine doing the NE Ridge whilst Al and Andy ascended the Nigg. Dave and Tony, who had better luck with the crowds, reported that the 14 pitch Tortoise was great fun (The Line goes nowhere but the climbing is good all the same). Vicky and I did the superb Kasper Pillar on Piz Frachiccio, a climb that deserves all the superlatives that the guidebooks lavish upon it.

Unfortunately the same could not be said of the SE Face of Roda Val della Neve which was the Swiss family Mapleson's chosen route. The crux of the retreat was explaining to the wailing children that it was a loose pile of rubble and completely unsuitable as their first Alp.

Sabina and Sheena headed to the Bondasca for a civilised walk, which saw them taking morning coffee at the Sciora hut and an afternoon beverage at the Sasc Fura as they completed an enjoyable circuit of the valley.

Others walked and climbed in the Val Bregaglia but alas Wavey and Trish headed home. The first to head in that direction but Jo arrived as a replacement.

Yet another sunny morning saw Rob and Christine heading home as Lucy and Ben arrived as reinforcements. Dave and Tony were off early once more to make the most of their last day by climbing the varied 9 pitch Spidi on Piz Balzet (And a different telepherique operator!). The Maplesons were also back out on the hill with the day's goal being to take the kids on a glacier. Before reaching said glacier, however, Owen and Carys rebelled and were subsequently marched up Piz Dal Pal for their troubles and thus bagged their first Alp. Unfortunately it still wasn't "a proper mountain" according to Carys. The rest of us were far more sloth with our only activity being a visit to a vicious little crag at Morteratsch. Nice view, shame about the crag was the general consensus but the harsh grades provided much amusement and bemusement and the fine vista of the Bernina compensated for the cliffs inadequacies.

The last day of the meet (certainly as far as writing this meet report is concerned) saw yet more folk heading homewards whilst others went valley cragging. In fact only 4 of us headed off up the hill. Lucy and Ben had a good explore of the Albigna area whilst Vicky and I toiled off up the Bondasca to bivi on nice soft grass just below the Sciora hut. We then spent a civilised evening enjoying the magnificent views whilst savouring a bottle of Grumello and contemplating the meet which I think has been a success. Twenty two people on a meet virtually a thousand miles from Manchester! It has helped to restore my faith in the club's future. Thanks to everyone who came.

Lots of people have expressed an interest in attending this meet from a broad spectrum of the clubs membership so fingers crossed it will be a good fun week of glorious weather that enables us all to get lots done in the mountains.

If all goes to plan I will arrive at the Vicosoprano campsite http://www.camping-vicosoprano.ch/ in the late afternoon/early evening of the 21st and after drinking some medicinal wine to aid recovery from the journey, I will take it from there.

See you in Switzerland. Or for the less adventurous, Giggleswick in October. 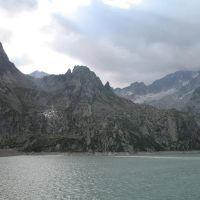 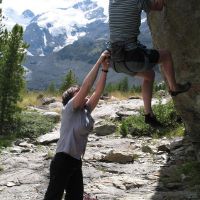 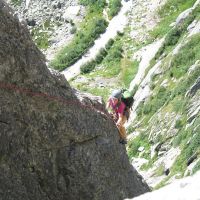 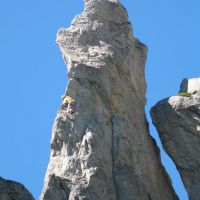 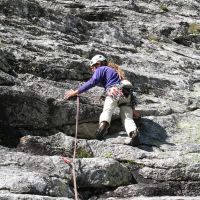 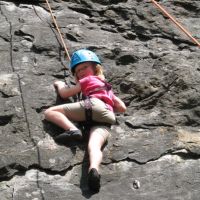 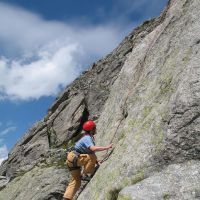 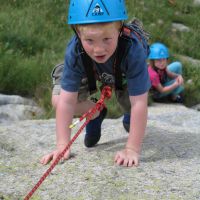 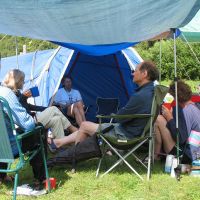 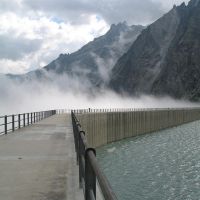 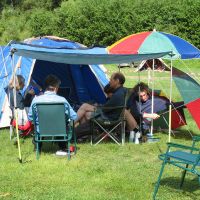 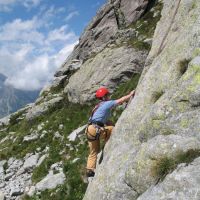 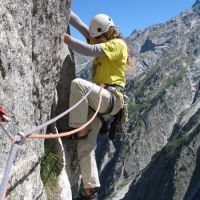 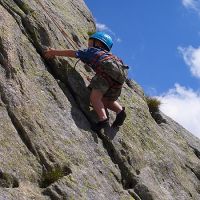