Despite an unpromising start – an overall dampness with a few spots of rain, greasy rock covered in green slime, and the tea van not yet open for business in the car park at 10 o’clock – this turned out to be a well-attended meet with a few new faces. The weather gradually improved over the course of the day, turning to cloudy but dry and then on to sunny but cold and windy (which at least dried the rock out!).

Mark, Ding and Jason arrived first at the crag followed closely by Kate, Lorna, Roger and meet leader Dave S. After some doubtful inspection of luminous green rock at the western end of the crag, Mark set the ball rolling around 11 o’clock by leading the fist-wide crack of Question Mark (HVD), belayed by Ding and followed by various others including newcomers Jason and Lorna. Carolyn arrived at the crag, along with Paul and Nick, and led Answer Crack (HVD), a companion route sharing its finish with Question Mark, similarly graded but more technical up a thin flake-crack; likewise this was followed by various people, including Jason, Lorna and Paul all in good style on their first outing with the KMC.

The meet leader wasn’t too impressed by the green start to the top pitch of Tower Ridge (VD), which finally fell to Mark (perhaps it had dried out a bit more by then…) seconded by Nick. Mark also led the pleasant First Triplet (S), with its peculiar ‘cobbler’s last’ hold near the top, seconded by Dave S.

The crag was getting busier not to mention drier by now, and action was concentrated at the eastern end of the crag. Dave Wylie had led the lower part of Swan Crack (HVD) earlier on and brought various seconds up the lower slab to his belaying ledge, and Jim finally managed the higher polished crack to complete the route.

The rather cold conditions led Roger, Kate, Dave Wylie and Christine to go for a walk round the reservoir, a similar plan also being adopted independently by Dave Whittingham (out on his first meet in a long time!). This was apparently followed by a quick visit to The Clarence in Greenfield on the way home.

Meanwhile back on the crag, routes were being climbed thick and fast, often receiving mass ascents! Mark led Noddy’s Wall (HS 4b), not to be confused with Nobbly Wall (HVD) which was also climbed several times. Carolyn and Nick climbed Central Tower (VD) and Matchstick Crack (S). The splendid nose (the clue’s in the name!) of Nasal Buttress (HS 4b) received leads by Colin, Jim and Mark, and numerous ascents by others. (The sun was out at by this stage of the day, accompanied unfortunately by strong winds which for some reason seemed to create a pronounced eddy effect around Nasal Buttress in particular!).

I lost track slightly of who did what around this time, so apologies to any noteworthy deeds I’ve left out. However I did observe that Nick led the surprisingly tricky Cooper’s Crack (S 4b, where ‘S’ may well stand for ‘sandbag’) – the awkward overhanging corner crack at the start certainly gave Al pause for thought when he seconded it! I also led The Direct Route (a more amenable HD) seconded by Ding.

Various attendees had departed by 5-6 p.m. Colin had earlier led Left Embrasure (VS 4b), a lead now repeated by Al seconded by Nick. James provided a heart-stopping moment (for himself and onlookers, including Al on the adjacent route) by taking a leader fall from the notoriously tricky top section of Right Embrasure (VS 4c), just above the awkward overhanging wide crack and some way above a couple of cams. Despite striking a rock ledge a glancing blow with his helmet on rope stretch and then ending up only just above his belayer Colin, he was fortunately unhurt if slightly shaken. Colin stepped in to lead the route in steady fashion with the added security of an additional large cam higher in the wide crack, gamely followed by the dauntless James and then Jim. Mark, Jason and Ding had still been busy around Nasal Buttress and unaware of the drama until they passed by on their way home! They were closely followed by the others who decided to call it a day after this dramatic finish. (The sun was shining and the tea and ice-cream vans were still serving on return to the car park, although James had a final unwelcome surprise in store as he had forgotten to pay-and-display and came down to find a fixed penalty notice on his windscreen. I pointed out helpfully from personal experience that it was at least better than having his car towed away however…) As with the others earlier on, James, Colin, Al, Nick, Jim and Dave S also called in at The Clarence on the way home.

All in all, an active and eventful day with a good turnout despite the off-putting conditions early on. Thanks to those who came along to this as their first KMC meet, we hope to see you again soon. Good also to see a few older faces getting out again!

Newcomers to the club, regardless of ability or experience, are especially welcome on a day out climbing at a classic gritstone edge, though there is also plenty to occupy the old hands! Email membership@karabiner.org if you have any queries or need help arranging car sharing etc. Crag map reference: SE 027040, see also http://www.ukclimbing.com/logbook/crag.php?id=108 for more details.

Within easy striking distance of Manchester and well served by car parking (best not to leave it too late on a fine day though - fee payable but there is an ice cream van at Dovestone Reservoir!), a slightly strenuous walk-up (good training) means this fantastic crag is usually surprisingly uncrowded, despite its wide range of lower- to middle-grade climbs on remarkably and reassuringly unpolished rock in a mountain setting with great views. (If it were as close to the road as Stanage Popular End it would be packed!)

The standard approach involves parking at Dovestone Reservoir (just below the dam at SE 013035, off the A635 just out of Greenfield heading towards Holmfirth). From the car park walk past the Dovestone Sailing Club, along the tarmac road to the Chew Brook bridge, turn left along the well-used walkers’ path then after 200m follow the left side of a wall heading up rightwards. Pass below the Dovestones Quarries, then slant left up the hillside to the natural crag up on the skyline. (NB The obviously quarried areas are rather less amenable than the natural skyline crag of Dovestones Edge, so make sure you end up at the edge rather than in the quarries!). Walk-in is about 25-30 minutes.

If the Dovestone Reservoir car park is too busy (especially later in the day), the alternative is to use Binn Green car park (SE 018044, a little under a mile further along the A635 Holmfirth Road) – slightly longer walk-in around the north end of the reservoir but the crag is clearly visible from the car park and the way is obvious...

Easier classics on Dovestones Edge include Crack and Chimney (Mod), Wrinkled Buttress (VD), Central Tower (VD), Answer Crack (HVD), Nasal Buttress (HS 4b) and Layback Crack (HS 4b), though there is also plenty for the intermediate climber such as Left Embrasure (VS 4b), Mammoth Slab (VS 4c) and December Arête (HVS 5b), and a number of quality extremes including Danegeld (E1 5b) and The Hanging Crack (E2 5b), not to mention Hymen The Tactless (E5 6c)… My own guidebook (a 2001 reprint of the 1988 BMC Moorland Gritstone: Chew Valley guide) mentions the Karabiner club as being particularly active on Dovestones Edge in the 1940s, so follow in the footsteps of much-missed KMC stalwarts such as ‘Plum’ Worrall and Bowden Black on one of their time-honoured stamping grounds.

I’ll aim to be at Dovestone Reservoir car park around 10:00 a.m. and then on to the crag for about 10:30-10:45, starting off around Answer Crack on the Western section of the crag. 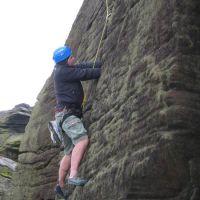 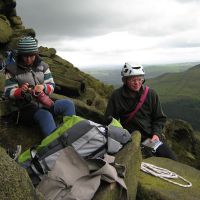 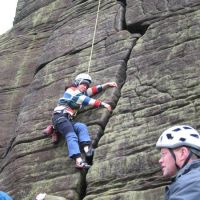 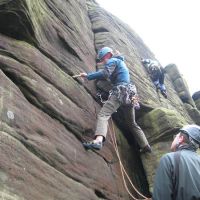 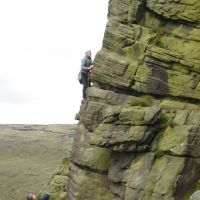 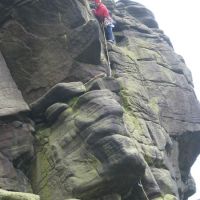 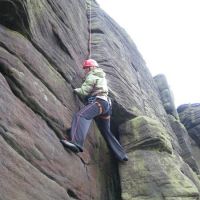 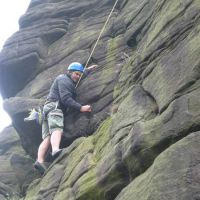 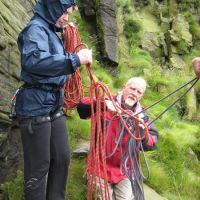 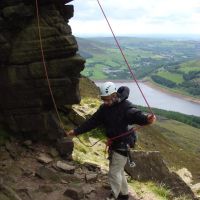 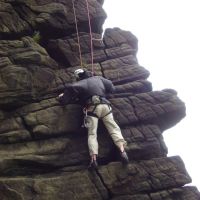 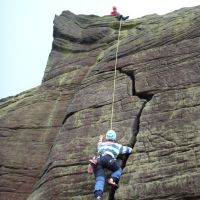 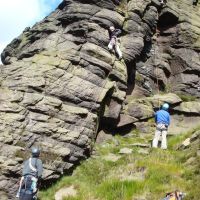 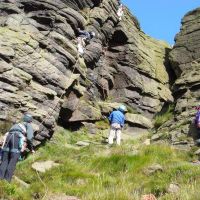 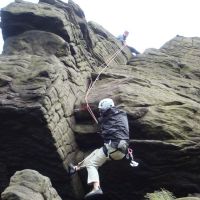