A grand day out indeed. Mark set out to get maximum points this weekend, by swimming at Pickmere on the way there, camping at Hen Cloud, arriving first at the crag, and taking the Meet Leader up an easy route before going off to do some real climbing. But Dan and Rob had started really early and were already bouldering when Mark and I came up the steps.

Rob kindly set up a beginners’ slackline and gave demos, lessons and encouragement – but was still acknowledged Best On Line at the end of the day. www.wikihow.com/Walk-a-Slackline reported record traffic the following week, and Manchester Royal has built an extension to its A&E.

It was good to see Iain, and as is our tradition we had a quick review of Ty Powdwr’s sewage system and hot-water arrangements.

Pete Walker and Alan (L) Jones joined us for lunch and reminiscences, Pete celebrating 50 years since he first climbed at the Roaches – ten years more than the meet leader.

Meanwhile, at the rockface…

Dan led West’s Wallaby with borrowed gear (replenished at the ½-way point) and only Carolyn could follow him.

Dave Shotton led Aqua by mistake, believing it to be Damascus Crack, Saul’s Crack by sheer determination on a wave of good wishes and encouragement, and finally Right Route by intent. At the Swim weekend a week later, we could all see that Saul’s Crack had taken its pound of flesh from Dave’s knee. Noble battle-scars Dave…

The powerful Andy-Jason team knocked off Black & Tans, Damascus Crack by the Tower finish, Left Pedestal Route by the Rope-Jam finish, Rotunda Buttress, and probably more that I didn’t spot.

Carolyn led Central Route, Rotunda Buttress and Damascus Crack, in addition to being one of the best on the slackline.

Pete Walker was particularly pleased to see all the ascents of Rotunda Buttress: he reminded me that Bowden Black, one of our Founder Members, made the first ascent in 1945. In those days it was hemp rope, Woolworths plimsolls, and very little gear, so the route was then even more necky than Andy pronounced it on Sunday.

Dave Wylie led Damascus Crack and Maud’s Garden, and demonstrated just how easy the crux of Aqua is when you are 7ft tall and competent with it, but failed to coach Laura – arriving late due to parking at Roach End (mind you, by that time of day that was probably as near as you could park to the crag anyway) – to replicate his agility.

Ding put in some serious belaying, notably at the foot of Saul’s Crack.

Martin, Zoe and Alex had fun in the boulders, and were the only team to sample the Lower Tier.

We only really explored the centre and north of the Upper Tier: next year we must get to grips with its southern end, the Lower Tier, and the delights of Skyline….. and who is up for The Sloth?

Epitaph at The Roaches

The Roaches Meet was great fun, but saddened a little for me by the news from Gary Gibson at lunchtime that Fred Crook had died from cancer. Fred was one of the bunch of Roaches enthusiasts I had come to know over the years who all climbed far harder than I could. Fred was one of the oldest – even older than me – but great fun to be with. I’ll miss him.

While we were making our mass ascents of Aqua, Gary and co were celebrating Fred’s life by doing battle with the adjacent route, Quickbrew E2 5c, which Fred put up in 1981.

Climbing, walking, running, bouldering, caving, sheltering from the rain, eating, sleeping, getting fried by the sun, getting married… it’s all here. And indeed Scott has done all of those (except the climbing and caving) here in just one weekend.

This collection of crags just drips with 3-star routes, including some of the longest on grit.

Bowden Black and other KMC members are responsible for several of the routes, including the superb classic “Valkyrie”.

One of the best Diff’s here is the meandering one and a half pitch “Inverted Staircase”.

My happiest memory of this route is following Bowden up it one wet November day long ago. He was belayed on the big ledge, and as I came up I felt along the edge of this ledge for something positive. I put my fingers in a big patch of sticky bird poo, right in front of his feet.

“You could have told me about that Bowden”

“Didn’t need to Roger – you found it for yourself”.

For something more direct, to give the kids a top-rope on, “Breakfast Problem” VD and its neighbour “Days Gone By” share a stonking belay on top of Alpha Buttress. Or there are the nicely-sheltered cracks at the RH end of the Lower Tier around “Commander Energy”, if they haven’t been bagged by a Group. And “Yong” HVD at the LH end, by the steps.

More adventurous routes include (in order of increasing difficulty to me)

The sun will be on the main face soon after and we’ll all have a grand day. 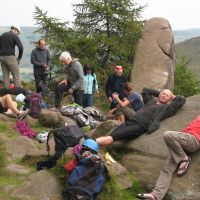 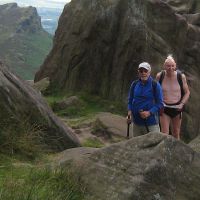 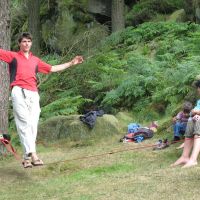 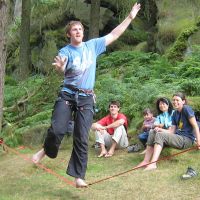 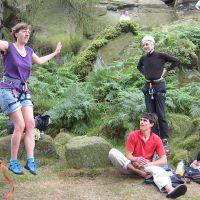 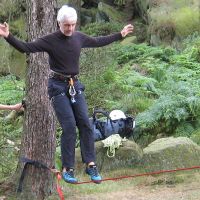 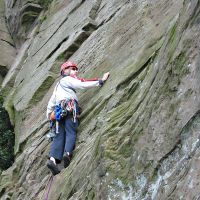 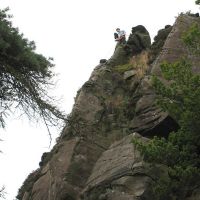 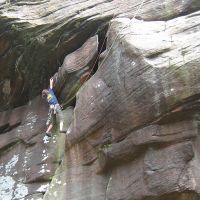 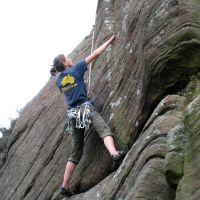 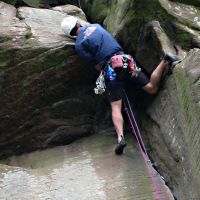 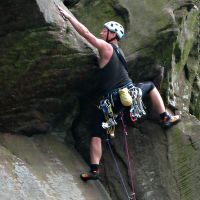 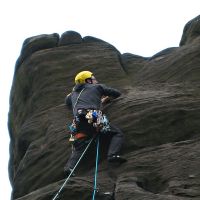 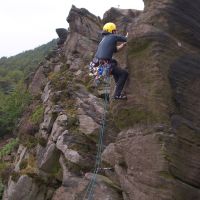 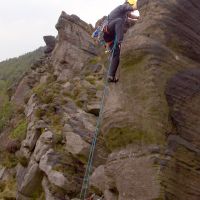 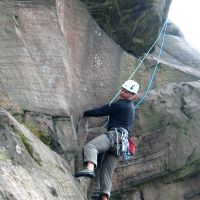 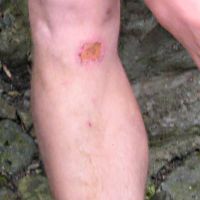