This was the second joint meet we have held with SUMC and forms part of the Committees "grand plan" for getting the club better known amongst non-pensioners. SUMC attendance was more than double that of last year (despite the very poor weather during the previous week and an indifferent forecast). So last year's reconnaissance party must have reported back that KMC "oldies" were "user-friendly".

The turnout amongst the students would have been even higher had they not suffered a last minute "driver-crisis". Apparently you have to be over 21 to drive the Students Union mini-bus, and only one of their members qualified. Unfortunately the Students Union imposed a "life-ban" on their only over-21 year old member, for reasons which the SUMC members refused to disclose. However we did get some insight into the nature of the SUMC problem when on the return journey, Carl Birchall managed to totally right-off a car he had borrowed from his sister in a head-on crash on Deansgate (yes Deansgate in the centre of Manchester which always has stationary traffic).

Those who made the effort to turn out were rewarded by two days of excellent weather - clear blue skies but very cold. On Saturday one group of KMC members decided that the cold conditions required a linear walk from Nantgwynant over Yr Aran and the Clogwyn Du Alft Maerideryfr ridge to Snowdon and back to the hut. However, the SUMC members decided that such as expedition was strictly for old people, and they were going climbing whatever the weather. The students climbed Great Gully and Amphitheatre Butress on Craig yr Ysfa in just two hours, and a third party failed on the Sub-Cneifon ridge. One student, who was referred to as "Jesus" walked from Ogwen back to the hut (a walk he had never done before) without a map or compass - but perhaps his alias meant that he had outside assistance.

On Saturday night the students regaled the tale of Jasper's (their President) last climb, to hysterics and disbelief from the KMC members. If anybody called Jasper applies to join, we should become full-up very quickly.

On Sunday one KMC party climbed the Ordinary Route on Idwal Slabs, which involved avoiding the frozen water-courses and smashing the ice off the holds. The students decided to avoid the crowds with a mass assent of some obscure slabs on Mynydd Perfedd which they reported back as highly recommended.

Many thanks to all for an excellent weekend.

This meet is another part of the Committees "grand plan" to get the KMC better known by "younger things". For the second year we are holding a joint meet with SUMC, and the students are keen, .so the advance party who conducted a reconnaissance of the KMC last year, must have reported back that the "oldies" were not that bad. The provisional plan is to hold a joint walk on Saturday, but the exact route will obviously depend on the weather, and how much we want to prove to the students that our "over 60s" have no respect for age when it comes to walking up mountains. It is hoped to have a linear walk ending up at the hut, with a few short cuts for the students who can't keep up. And we should be able to use the students' minibus to ferry the drivers to collect their cars, but the students don't know about this yet.

All welcome. For more details nearer the time please ring me E-mail me. Failing that, use the old technology and come to the pub on Thursday. 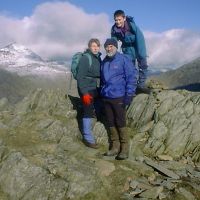 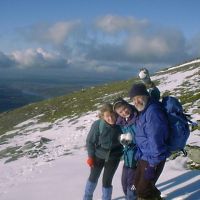