The Charge: Failure to avoid own meet and one count of supplying adequate advertising material for the meet venue.

Case for the Defence: Nether Tor turned out quite nice really. The rain was held at bay and the midges stayed in their little houses. The initial cloud cover cooled the walk up to the crag from Edale. The cloud sunsequently parted once climbers were established on the rock face, revealing an all over blueness above. The sunshine remained, into the afternoon and even later at The Rambler where it seemed appropriate to support the local economy.

On the fabled route of Flash Wall a great talisman of silver was set in place, high in the final crack system. Such was it that the sun shone upon this giant demonifuge and the entire crag basked in the dual radiance of the golden sun overhead and the new silver sun so lovingly manoeuvred into place by John E.

The resident safety committee was out testing. Unexplored axioms and all that. Top of the agenda - Flagellation, how long does it take for a helmet to fail under the repeated self applied blows of a number three wire. Next on the agenda - Rope extension, by how much does a rope remain extended after a climber plummet with a fall facter of one. (Aside: A fall from the top of the crag to the bottom, with the faller being arrested just before decking out will generate a fall factor of one.) Third on the agenda - Shovels, to be brought to small crags to facilitate holes below routes to generate bigger fall factors.

Wondrous navigation brought James on an overnight jaunt from the Barre des Ecrin hut on the Glacier Blanche straight over to Nether Tor, crampons still jangling in his sack. True gritstone dedication.

An eye opener in the determination department. The guest jury displayed a united front in scampering up everything in their path. Forcing a mental rethink in many of the resident KMC rockjocks, lots of sucked in beer bellies and straightening of backs and clearing of throats and polishing of nuts and flexing of lard supplemented biceps and lightening of loads (soloing) and asking for top ropes in mutes whispers (as opposed to the usual fear unduced roar) and not having a cup of tea between falls and many other such ploys to enhance their glamour.

Lunch time saw a lot of sizzling fat (part of the rethink) layed out under that gorgeous globe. John E., purveyor of quality edible merchandise, unleashed a batch of succulent flapjack, while luxurious sun loungers and 'Didsbury style' strawberries, ported in curtsey of Dave L., added to the bizarre concoction that is Nether Tor, suntrap of the Western Hemisphere.

Andrew was chartered to record the misdemeanours in the event this case goes to appeal.

Neville and Roger where using a GPS as a crag approach device and have confirmed that the location of Secret Butress is SK11788752 (to ten meters). They haven't admitted if they thought Secret Buttress was in fact Nether Tor, but they did get to Nether Tor via Secret Buttress, being some of the later arrivals. General Note: Neville is said to be issuing the next KMC fell race check pointers with GPS units so they can find the check points. Surely all competitors will have to use them - so that every one will be adrift by the same amount.

A surprising number of routes were prodded and probed, with ascents on Inverted Crack, Don's Mantel, Primitve Route, Nose Climb, Pocket Wall, Weathered Wall, Two Way Route, Birthday Boy, Rucksac, Three Step, Pedistal, Free Wall, The Roman Nose, Rejoyce, Flash Wall. To name some that are in the book. There was one route done on Secret Buttress, by Roger and Neville.

Closing Speech: I suspect it was the sun that persuaded every one to turn up, they must have been out in it the previous day, got sunstroke and a clouded judgement. However, many thanks, for showing up and toting all the ironmongery and weaponry to such a high level crag. And thanks for being so enthusiastic; both in climbing and providing ropes for others to climb on. Also thanks for drinking beer at the local pub, without which the sunshine couldn't have been fully enjoyed.

Sunday, 10:30 a.m., Nether Tor, on the southern edge of Kinder Scout. Park at Edale (bring coins for the machines), start up the pennine way and then sneak off rightward to the sky line. If, and when, Nether Tor is climbed out the mystery of Secret Buttress followed by Upper Tor and Grindsbrook Rocks should keep the interest until perhaps 11:27. Then it's back down for a refreshing pint of your own fancy. 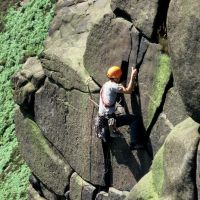 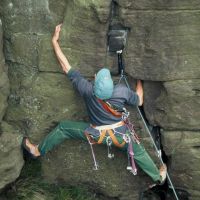 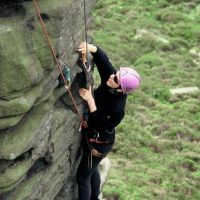 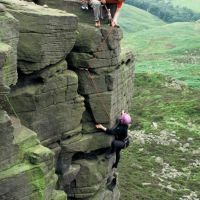 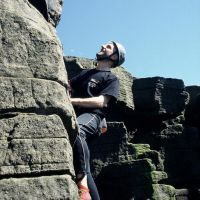 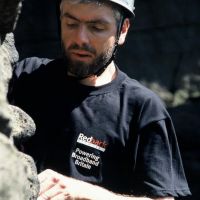 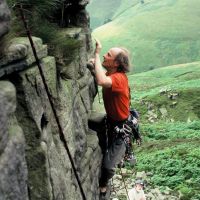 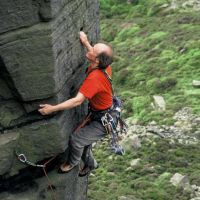 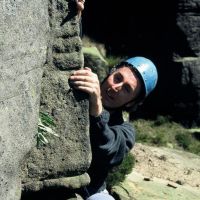 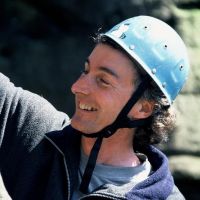 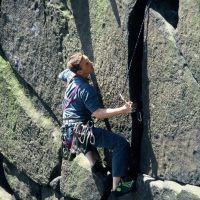 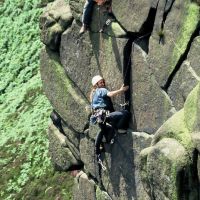 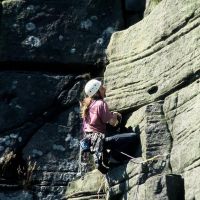