Once again, the Glenbrittle Hut on Skye paid host to a troop of Karabiner Mountaineers for a week at the start of June. Reasonable weather, good company and a variety of exploits (remember that there is far more to Skye than just the Black Cuillin!) resulted in yet another excellent meet.

After travelling up through Scotland in extremely warm weather, the highlight of the journey was the Glen Elg to Kylerhea ferry. Superb value at £6, you really feel you've got your money's worth. It adds a genuine sense of travelling to an Island, unlike using the infamous Bridge. Arriving at the Hut, we found that ex-KMC'ers Angus and Hope Morris were staying there that night and knew some of our team.

First thing in the morning, Al was up bright and early for a quick ascent of Sgurr nan Gobhar before breakfast! He then teamed up with James, Anja, Anna and Scott to head up into Ciore na Banachdich, followed by an evening swim in Loch Brittle. John and Midge went for a coastal walk at Talisker Bay.

The rest of the team spent the day on a walk up towards Coir' a' Ghrunnda. However, as this looked rather wet, we headed down to the coast to visit the point, taking in the ruined croft, cave and chambered cairn. Coming back along the track proved interesting as the rivers we had to cross were in spate!

In the evening we were expecting Sheena and David L. to arrive, following the weekend meet in Glencoe, but there was no sign of them. We were left to wonder what had held them up...

The weather proved to be better than the previous day, fine on most of the Island and clearing later on in the Cuillin. A trip round to Harlosh was decided upon, to explore some of the sea-caves. Trish, Roger, John, Midge, Jim, Sandy and Dave W. had a great time spelunking and scrambling. We also saw a tall Ship in Loch Harport - later research proved it to be the Jubilee Sailing Trust ship "TENACIOUS".

A second team, Scott and Al, climbed Window Buttress then the In Pin. James, Anna, Anja, also did Window Buttress (including going through the window). This was Anja's first taste of climbing - What a great introduction! Mark went up into Coire Banachdich to do some scrambling, coming down over Sgurr nan Gobhar.

Arriving back at the Hut, the warden told us that Sheena and David L. had finally arrived. The reason that they were late was because "Fiona Roy took a fall in Glencoe, was very badly hurt and was in hospital...". As Sheena and David had gone out again, we had half an hour of panicked worrying before they reappeared to add the vital "...but she's going to be OK" to the report.

It was a bit of a cloudy start, but the clag soon lifted from the Cuillin. Trish, Roger, Midge, John, David L., Mark and Dave W. did a Clockwise circuit of Coire na Banachdich, but didn't climb the In Pin due to an in-situ guided party.

Sheena, James, Al, Anna went up to Sron na Ciche and did "Cioch West". Scott and Anja did a walk to the headland South of Glenbrittle - where Anja got right to the point.

In the evening, Trish, Anja and David L. went swimming in Loch Brittle. Roger provided transport plus a tape of "seaside" Wurlitzer Organ music in the car on the way back to the Hut.

With pretty fine weather all day, Trish, Midge, John, Roger, Jim, Sandy and Dave W. walked up to Bealach a' Mhaim, where John spent the rest of the day. The rest of this team continued up Bruach na Frithe, along past the Bhastier Tooth, over Sgurr a Bhasteir and down the North Ridge to meet John back at the Bealach.

Sheena, Al, David L., Scott and James did one of the Skye Classics: Pinnacle Ridge onto Sgurr na Gillean. Al and Scott continued South along the Ridge to the In Pin while the others came down over Bruach na Frithe. Anna and Anja went up to the In Pin, though they didn't climb it.

Mark went on an ornithological walk on the coast up near McCloud's Maidens. He reported seeing two Sea Eagles, two Golden Eagles, Peregrine Falcons and Buzzards!

With low cloud and light rain in the Black Cuillin, plus a strong wind, a team set off to explore the Red Cuillin. Trish, David L., Sheena, Dave W. and Mark headed up from the "Slig" onto Sron a Bheakain. Along Druim na Ruaige, up to Beinn Dearg Mheadhonach, over Beinn Dearg and down the the bealach. There was a major slog up onto the Sgurr Mhairi end of Glamaig, then easier walking along to the An Coileach end and down the flank of Glamaig to the road. There was also, of course, the mandatory couple of pints in the pub.

John, Midge and Roger spent the day exploring another sea-cave, this time near Greep. Jim and Sandy went up to Trotternish and paid a visit to the Quiraing - definitely worth a trip for the amazing rock scenery.

Scott, James, Al, Anna, Anja went climbing at Flodigarry. Scott put up a new route, near the existing route "Spantastic". He has called it "Sea Slaters Crack" and reckons that it goes at about E1 5b.

The low cloud and mist that started the day gradually cleared, though not soon enough to avoid some "interesting" navigation in the hills! Trish, Dave W. Mark, Roger, David L., Sheena headed up into Coir' a' Ghrunnda and scrambled up the left hand side into the upper coire. We had lunch by the Lochan, with David L. feeding Bombay Mix to a seagull... Thanks to the mist, we took the wrong way out of the coire and ended up bagging Sgurr Dubh na Da Bhein by mistake! We were, by this time, on the wrong (South) side of the TD Gap so we headed back down to the Lochan and found the correct way up this time. We carried on to Sgurr Sgumain, then David L. and Sheena scared themselves getting lost going up Sgurr Alasdair. The others came down (the wrong way!) to below the Cioch then did some bouldering on the rocks below Coire Lagan. Trish, forgetting that it's OK to let go when you're only two feet from the ground, trashed her fingertips trying to hang on to the razor sharp gabbro when her feet slipped.

The visit to the Quiraing was by Midge and John this time. Al, Anja, Anna, Scott and James explored Talisker Bay.

Al and Anja headed back for home in the evening, leaving the rest of us to enjoy a glass or two of whisky in the Hut (aided and abetted by our new friend Barry Imeson) and reflect on what a superb week it had been.

Bidding a fond farewell to the Island, everyone headed for home. Not all of us took the most direct route, however, as there was a diversion to be made to the Raigmore Hospital in Inverness. Sheena, David L. and James (in one car) then Dave W. and Trish (in another) visited Fiona Roy who was proudly showing off her newly gained scars and bondage gear.

I have booked the hut again for next year, from June 5th to Friday June 11th 2004 (i.e. leaving the Hut on Saturday June 12th). This time I've got the whole hut (18 places) so there should be plenty of room for everybody! Let me know if you want to come along, but please DON'T leave it till the last minute as I already have names of interested people against most of the available places. Those already on my list confirm their place by slipping me £21 to cover the Hut fees for the week.

Once again, space in the superb Glenbrittle Hut has been booked for the KMC for a week in June. This meet has actually been an annual event for many years, though it doesn't always appear as an "official" meet in the KMC list. This is the second time that I have organised things, though it is about the tenth consecutive year I've gone along!

The Hut is superbly situated below the Black Cuillin ridge, ideal for climbers wanting to get up into Coire Lagan for the superb routes on Sron na Ciche. An almost infinite choice of walks and scrambles also await, not only on the "main ridge" itself but on the subsidiary ridges and in the coires.

Further afield on the Isle there are other groups of hills (e.g. the Red Cuillin, Macleod's Tables, the Trotternish Ridge) plus many wonderful places to visit for shorter (or longer!) walks, sea cliff climbing, wildlife watching, tea shops, pubs...

Highlights I recall from trips in previous years include:

At the time of writing (the start of April) half of the 12 places I have booked for us in the Hut have been filled. Hopefully, by the time you read this all of them will be taken! However, despair not, as there may be space left and, even if the hut is full, there's always the campsite half a mile down the road, which can be called into service to handle any extras.

Please let me know if you are interested in coming along. Any spaces left in the hut will be handed out on a strictly first cash first served basis! The cost is £21 for the week (the price went up this year to, shock horror, three pounds per person per night!). Travel up on Saturday May 31st (or perhaps go on Sheena's Glencoe meet first and then join us late on the Sunday for the rest of the week). The hut is booked through to the Friday night so we head back home on the following Saturday.

I'm also interested to know if anybody would like to come along around the same time NEXT year, so I can decide whether to book the hut again in 2004 (this has to be done nearly 12 months in advance to have a chance of getting spaces).

Call me, e-mail me or see me at the Pub on a Thursday evening. 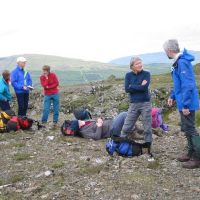 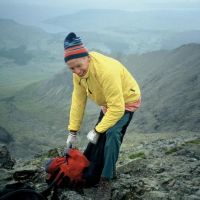 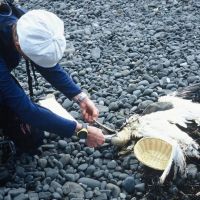 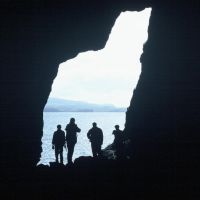 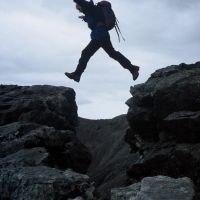 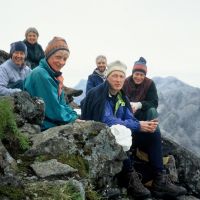 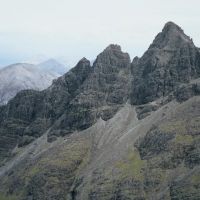 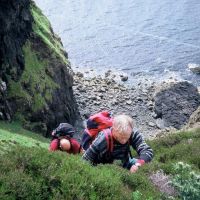 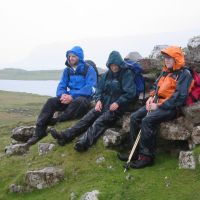 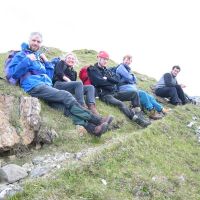 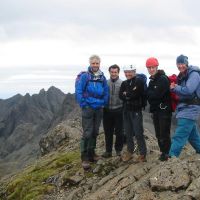 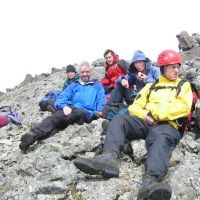 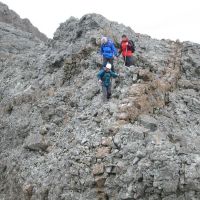 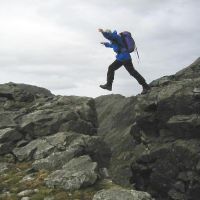 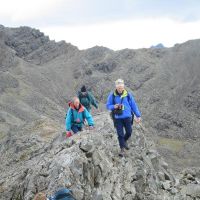 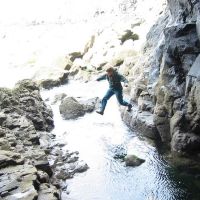 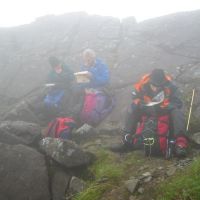 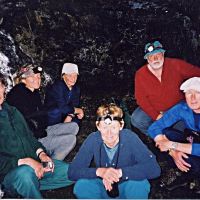 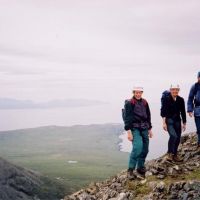