Catering thanks to some of the above and to Donna Sadler

Even before people found out that Scott had planned the route for the run people began getting their excuses in early and a few folk even feigned injuries.  A selection of texts reads as follows….

“Going for a walk with the Rucksack club”!!  Liam B

“My excuse is worse than Liam’s.  I’m tiling the bathroom” Jim

“The wall hey” Duncan to Colin.

“Act of defiance.  It would be wrong to do everything she says” Colin

“Impressed with Jim’s tiling.  It was grouting on the lead!” Colin

Anyway, as for the run, it all went very well.  Scott’s planned route was perfect for the weather conditions and a grand outing.  Initially we followed the banks of the river Irwell down to Irwell Vale before embarking on the long steady slog up past Robin Hood’s well to the windswept summit of Bull Hill.  The last section felt like hard work.

Then with the wind on our backs we descended through the twisting roots of Buckden Woods to Stronstrey where we regained the banks of the Irwell for a muddy mile along the Irwell sculpture trail before heading up to Edenfield’s crooked church.

Once safely across the road we began the climb up to Sandy Beds Lane for a wind assisted blast up to the summit of Cowpe Lowe.  Rain threatened as we descended Whinberry Naze but we made it off the hill dry and deserving of the copious quantities of soup and cake that awaited as debate began about the distance covered.  Electronic devices eventually settled on 12 miles but Mark insisted his legs were saying 14 miles.  My legs agreed with Mark’s.

Thanks to everyone who ran and helped with the food.

Meet up at 10.30am for an 11am start from 120 Hardman Avenue, Rawtenstall, BB46BW for a 10-12 mile circuit around the local hills and vales. Mud is guaranteed as is hot warming soup afterwards. Cake donations would be appreciated so thanks in advance Jim!

Unlike last year I have no one to lead a shorter (5-6 mile) run so if anyone wishes to volunteer let me know. 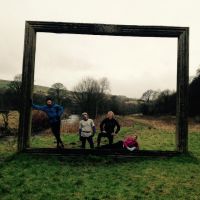