After a season of commitments elsewhere and at home I had watched the blogs and winter logbooks with increasing anticipation.  The Ben was in superb condition most of the winter with good ice.  Our forecast wasn’t too promising – decent enough for Friday but deteriorating sometime on Saturday or Sunday – maybe we would get two good days.....

Thursday: James and Steve aimed to be away from Steve’s at noon but were delayed a little – James watched Steve loading his boots into the car and fortunately remembered that he had left his at home in the hallway!  Andy, Jim and Matt were away from Salford at 1pm arriving at the North Face car park just after 7pm.  We had a weigh in with the portable scales: Jim at a whopping 29kg, Matt 26kg with Andy a featherweight 21.5kg.

Despite a minor Nav error (courtesy of guess who?) in the forest we reached the CIC in two and a quarter hours.  The party already there had brilliant weather earlier in the week but a foot and a half of snow had fallen on Wednesday, then been blown about on Thursday.... we were warned of loose powder sat in large quantities on the upper steep slopes of very hard packed ice and Neve.

Friday morning we set off with the idea of climbing Smith’s Route V, 5 on Gardyloo Buttress – at 1200m altitude one of the highest climbs on the mountain.  We decided on an approach via climbing Tower Scoop - a 70 meter grade III ice route as an intro.  We passed the Minus and Orion faces in fantastic condition then Hadrians wall – fat and wide with ice and looking in amazing condition, as was Point Five Gully.  Visibility deteriorated as we climbed the worryingly deep unconsolidated powdery snow on the steep upper slopes of Observatory Gully – a notorious avalanche blackspot.

We gained the base of Tower Scoop and split: Stevie and James as a pair with Andy, Jim and Matt as a three.  The icefall was wide enough for both teams so after Steve had established himself I followed on the superb fat ice.  We belayed near each other, and as James led off on P2, I brought Matt up.  I looked up at James.  He wasn’t finding the steep section easy.

‘’Oh S***!’’ shouted Steve.  An ice axe came whizzing down the pitch bouncing off the ice and disappearing into the clag below.

I looked up.  James was hanging onto his one remaining axe with both hands.

‘’Get those front points well in, be careful’’ shouted Steve.

‘’He’ll be doing well if he finishes this with one axe’’ I said to Steve, quietly.

After some obvious panic and scrabbling a second axe came tumbling down, followed a few seconds later by its owner who bounced amazingly well on the ice as the rope came tight on the screw a few metres below – maybe a 25ft fall in all.

Steve lowered James to the belay and they assessed damage which, at the time, seemed minimal.  Meanwhile Jim, magpie like, had spotted a pair of abandoned shiny axes just below him in the gully...  A few minutes later and axes were re-united with their rightful owner who belayed Stevie up the final pitch whilst Jim finished our line, both belaying from Deadman anchors and bucket seats on the steep snow slopes above the scoop.  Given all the circumstances, we decided retreat to the hut was the better option, compounded by the fact that I had forgotten to take the key with me that morning.

‘’There is always someone there’’ said Stevie. ‘’Let’s not worry’’

I climbed the steepening slopes towards Tower Gully, the snow consolidation worsening.  At the rope’s length I dug down for an axe belay. 18 inches down I found the old hard glassy ice-neve surface.  A sick feeling rose in my stomach.  This was all wrong. I stopped Steve from coming further on the other rope and we both descended very gingerly to the deadman belays.  Steve traversed left onto steepening icy slopes in the deteriorating visibility – now just 30 meters.  He wasn’t convinced.  I followed for moral support. A few metres from Stevie I spotted something stuck out of the snow.

He went and scraped.

We checked and double checked, tied in and brought the others over as we set up the abseil.

‘’Steve, you are closest and possibly heaviest, you go first!’’

As Stevie set up we all unclipped and self-belayed  to our axes.

‘’Thanks Guys, now that’s a vote of confidence!!’’

Thirty minutes later and we were all back safely on the snow and descended to the hut.

It was Locked.  Shut.  A Fortress. There was no-one there.

Four mutinous mountaineers glowered at me.

Both mine and James car keys were in the hut as was my phone... I did, however have a spare set of car keys in my glove box along with a key for Waters Cottage......

Matt found the non-emergency Mountain rescue number and we spoke with the wife of the secretary.  Time passed.  There was no further info.  We had been there an hour.  We packed up, resolving to walk down, smash the window on my car, get the spare key and drive to Waters Cottage.  Minutes later a call came through to say a key was on its way to the top car park in a landrover!  I trotted off, happy about the car window.  3.5km later and a few hundred yards from the car park three guys with big packs rounded a corner. Mountaineers!  With keys!  I carried on and profusely apologised to the guy I had dragged up from Fort Bill...

That night we had great craic with the Scottish lads plus the other ten or so who had arrived, lured, like us, by the fat ice, in spite of a much more pessimistic forecast.  It rained most of that night and was raining and howling a gale when we rose.  The powder snow would now be saturated.  A few (fool)hardy souls ventured out only to return with tales of REALLY unstable slopes....time to bail!!

As ever, The CIC meet was a great giggle, and despite not getting much climbing done, I think is always worth it just for the adventure factor.  Thanks to my fellow meet members for their patience, great humour and brilliant company.  There’s always next year!

FIVE places booked as of 8th March 2015. Please call Andy in person if you wish to book. 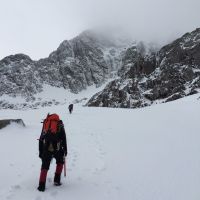 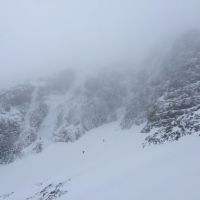 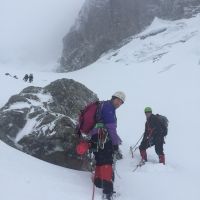 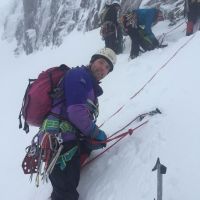 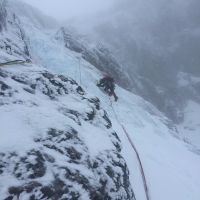 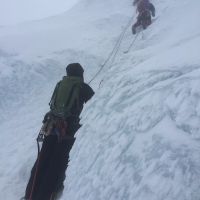 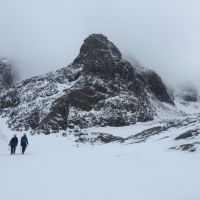