Andrew Stratford, five-year member of the KMC from Mossley, showed great fortitude on Easter weekend as he finally mastered the art of route reading, taking club newcomer Zoe Muffett up Tennis Shoe on the Idwal Slabs without incident.  The previous day had seen Stratford taking a severe ribbing from his compatriots as he made an attempt on Christmas Curry at Tremadog, only to lead Emily Pitts and Aleks Pawlik on a merry wander up not one, not two, not three, but four separate routes all in one climb.  Christmas Curry, graded at severe, obviously wasn’t tricky enough for Stratford so he threw in half a pitch of VS, more than a bit of E1, a pinch of HS and an errant thin sketchy finger traverse, absent from all guidebooks.  Anyone wishing to do a second ascent of Stratford Curry can receive a full route description by emailing Andy.

Tremadog felt the onslaught as more than half of the KMC massive descended on the place at different times on Easter Saturday.  Keen to get out on the first real day of the 2015 summer season, Emily, Aleks, Zoe, Andy and Mike met at Eric’s Café at 9.30.  Splitting into two groups Mike led up Shadrach VS (4c) seconded by Emily while Andy and Zoe swung leads on Grim Wall, with Zoe effortlessly leading a slight deviation from the VS route onto an E1!  Aleks followed them both in style and then experienced her first ever abseil.  Mike and Emily jumped onto the same route, with Mike leading.  After a delicious lunch outside Eric’s the teams swapped over and Mike led The Plum (E1, 5b) with Zoe following up gracelessly (her words).  The other team…. well, the less said about the Christmas Curry attempt the better.  Needless to say Aleks stayed calm as a cucumber and Emily burst into tears at the top.  After five months without climbing and an operation in between, this off-route adventure was a step too far.

Dave S, Mark S, Laura C and Dave W took advantage of a leisurely Saturday start and trooped off to Craig Y Gesail mid morning to ascend Bramble Buttress, before moving on to ice cream and Criccieth for a wander and a non-visit to the closed castle.

Saturday, being full of excitement for all, saw Christine and Lester taking a fine expedition up the Gribin Ridge, taking in the two Glyders touring down the saddle between Glyders and Tryfan to Cym Bochlwyd and finishing at Ogwen Cottage, before heading straight back to Ty Powdwr for a relaxing sit in the wall to wall sunshine.

The shock story of Easter weekend 2015 was glorious wall-to-wall sunshine rarely seen in these damp parts.  Grim forecasts perpetuated by the Met Office put off club members of less faith, but the turnout of 16 faithful wanderers - nine members, two members’ children and five guests – created quite a stir at the hut.

Mike went for a run up Snowdon from the hut – 2.5 hours, in preparation for the Midnight Mountain Marathon in June.  Zoe and Andy left early for their jaunt up Tennis Shoe in Cwm Idwal.  Emily and Aleks arrived at the slabs at 10 to find all routes rammed and with at least two groups waiting for the easier routes.  With the descent looking dank and looking for an accident, they descended to the car park.  Aleks waited for Andy and they then left for Manchester.  Emily met up with Mike and together they ticked off some trad slate classics in Bus Stop Quarry.

Lester scrambled up Clogwyn Y Parson, eventually reaching rock, after taking a dislike to the grassy ledges to either side and trying to avoid imminent death.  With the assistance of an ice axe in the grass for a bit of security he successfully reached firm ground and took the descent between the col of Crib Y Dysgol and Snowdon.

The LMDDC (Laura, Mark, Dave, Dave, Christine) crew had quite a day.  By 10pm, having not appeared back at the hut a call from the crew confirmed their continued existence.  They had started for the Parson’s Nose by taking the Llanberis bus to half way up the pass, walked to Cwm Glas, scrambled up to the bottom of the parson’s nose and then sat waiting for an hour while two young lads launched themselves up the Diff, dragging the rope around the houses until there was no drag left, panicking almost hysterically and then feeding Mark Jaffa cakes on the belay at the top.  The rest of the ascent passed without incident.  The group, deciding it was getting late, abseiled down Western Gully and walked all the way back to the hut, stopping at the Vaynol Arms in Nant Peris for sustenance.  They did some impromptu naked eye astronomy session along the way.  A great day out.

Bridget and family rocked up to the hut on Sunday at 7pm armed with boxes of fish and chips.  Emily, Lester and Zoe looked on wistfully at the aroma.

Easter Monday involved extreme crowd avoidance tactics by the Maplesons.  Roger served as pit crew while Owen went downhill on a bike mega fast.  Meanwhile Carys, Bridget and the dog meandered all the way up Moel Eilio, round cloggy contouring round Snowdon over to Clogwyn station before a steep drop off to Nant Peris.  All crowds avoided.

Tuesday welcomed more extreme activity in the form of shopping: slate shopping in Blaenau Festiniog and the first pitch of two Vdiffs on Clogwyn yr oen, finished off with sitting in the sun eating crisps and tea out in Dolwyddelen before going home.

Emily, Dave, Lester, Mike & Zoe enjoyed the remainder of the weekend on Easter Monday in the slate quarries in Serengeti on seamstress (led by Zoe), Seams the Same and some other E2/3 routes, led by Mike.

I can’t get my fat hands in your crack.

This 4 day meet offers members, newcomers and guests an opportunity to get together over the extended weekend and make the most of the club's fantastic hut and the setting - Snowdonia.  There are myriad activities, from walking and climbing around the bolted slate quarries, to bouldering and climbing in Llanberis Pass on classics of old, fell running on nearby hills, superb walking in the Ogwen Valley and much more around and about.

Attendees often get together for food, climbing, walking, running, wild swimming (too chilly still?), shopping and the like.  It's a sociable meet, with plenty to go at.

If you're new to the club, you'll need to arrange access; speaking to someone before attending is essential:  Check out the website  www.karabiner.org and contact us via enquiries@karabiner.org 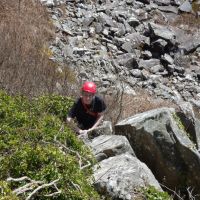 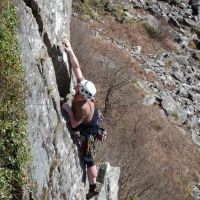 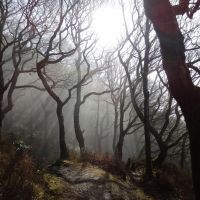 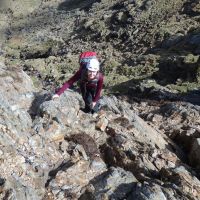 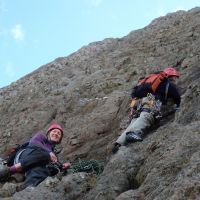 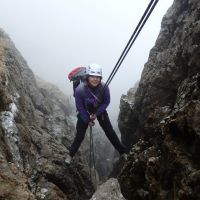 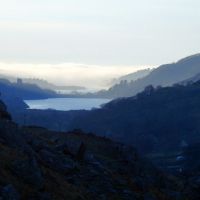 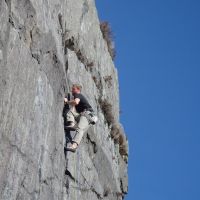 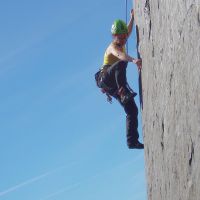 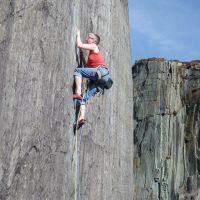 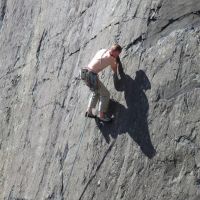 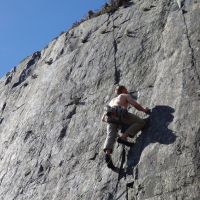