The suggestion for a Scribble Meet for the Saturday was postponed until the Sunday on the promise of a much improved forecast – and so it came to pass:  overnight rain cleared away to give a steadily improving and eventually pleasantly warm and sunny afternoon on the crag, which resulted in another good turnout.

The target was the Robin’s Hood Cave area – a gap in my previous trips to Stanage.  Numbers began to arrive from 10.30am.  Emily, who had agreed to bring Dave S (who had travelled by train to Hathersage) up the hill, was delayed by the lure of a cooked breakfast courtesy of Outside.

Geri and Michaela joined us on the strength of Saturday’s late email, indicating that this is a worthwhile medium in generating enthusiasm.  I remembered Geri from her previous outing with the club at the Roaches last year – she provided cakes to all present.  It was my first formal trip with the club and I wondered if this was some kind of tradition.  Sadly not…

Bee (VD) saw leads from Roger (Nils seconding), Lester (apparently his first lead in a good long time, with Dave S seconding) and Geri (her first lead ever(!) with Dave W seconding), as well as solos from Mark and James.

Stepladder Crack (VS 5a) saw a tag-team effort, with Beth leading out the first three gear placements and Emily completing.

Balcony Buttress (S 4a) saw a lead from Nils, with Dave W, Geri and Michaela following.

Sadly, my day was always destined to end early due to other commitments, but others stayed on until 7pm, with refreshments for the majority of the day’s attendees at the Little John in Hathersage.

After you left, Nils, discipline crumbled.

Emily kindly volunteered to take me up Robin Hood’s Crack.

This gave Dave Shotton the opportunity to take the pic on the website of my casual belaying (well at least my control hand is holding both ropes, and I did smarten up before Emily got to the crux).

Emily put good gear in, made the hard moves to get over the little overhang, and vanished from sight.

The rope continued to go out slowly.  And go out.  And go out until I had to start climbing.  This is 25m of rope on an 18m route.

Eventually “Climb when ready” was relayed from somewhere in the direction of Sheffield by the spectators, and I carried on up.

I took Emily’s gear out from below the overhang, stepped right, and started to move up.

These days, when I make crux moves, I like to have a rope going straight up from me.  Colin is especially good at arranging this.

No such consideration from Emily!

The ropes snaked horizontally across the ledge I was trying to move up onto for 5m or so, then vanished into a gully.   A call from a distant Dave Wylie:  “Take care Roger – you’re not protected” didn’t exactly add to my self-confidence.

Fortunately, when you’ve done a route ten times (over the last 44 years!) your body just somehow remembers what to do and I was over the bulge and on the ledge in seconds.    I could now amble gently along the broad ledge, just taking care not to trip on all the rope.

There was a deeply-undercut block 2m square at the top of the gully, with cracks both sides.   Emily sat belaying at the top of the LH crack, above a big cam with one pair of its lobes doing nothing useful.    Dave stood at the top of the RH crack:  “Take that cam out then come up this crack.”      Yes…. so if I fall out of the crack….  Dave saw my look.  “Don’t worry, it’s easier than it looks.”     He was right, and I was soon up and promising Emily that revenge would be taken…..

Really, taking Dave Shotton’s photo into account, we were a right pair. 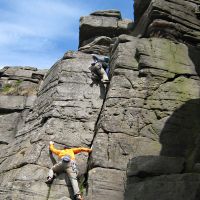 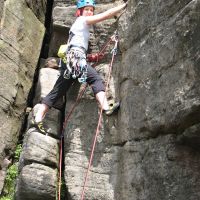 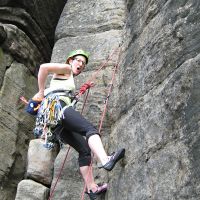 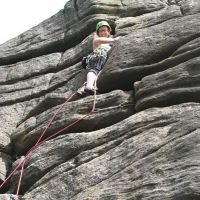 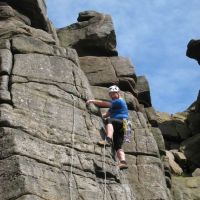 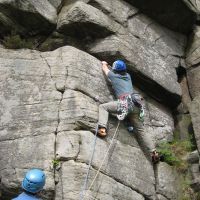 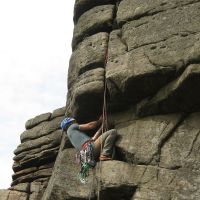 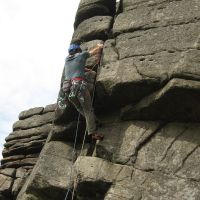 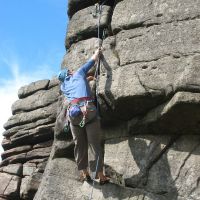 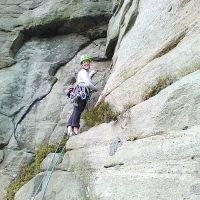 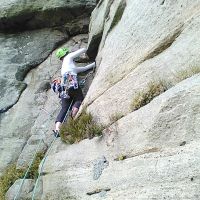 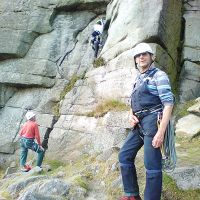