Apology for Absence: Sheena Hendrie, who emailed “I needed more exercise than a trip to Froggatt would provide”.  Right Sheena, we’ll pair you up with Gareth or Jim on the next Meet.

Weren’t we lucky with the weather!   Torrential rain and thunderstorm the day before, dry rock when we arrived, warm and sunny all day, then gentle drizzle to speed departure to The Grouse at 4.30.

The Stratford – Symon – Wylie team made a gentle start with Heather Wall HVD 3c, then Jim led the crew up Diamond Crack HS 4b - always yields to a powerful approach.   Next for the team was North Climb HVD 4a - a steady lead by Dave, with the comfort of a vast Friend borrowed from a (wealthy?) spectator.     Terrace Crack HS 4b was next on this team’s list, followed by Green Gut HS 4a, at the top of which Jim found himself belayer to a steady stream including Cathy Gordon who arrived just in time and Emily who was told she had 60 seconds to do it before the belay service closed for the day.   She almost made it – that girl really is quick.

Andy thought he might be getting a rest at this point, but James arrived – travel from the car park no doubt slowed by the impressive rack (3 racks?) of gear he had brought.  James had his eye on Pedestal Crack HVS 5a, and it became Andy’s job to follow him.   Tough route James – well done.

Nils and Ding had a great day.  It started with Nils leading North Climb HVD 4a followed by Terrace Crack HS 4b, then Ding leading Heather Wall HVD 3c.    With Nils back in the lead, next on their list was Sunset Crack HS 4b, followed by the infamous Three Pebble Slab HVS 5a – well done Nils!    Just to celebrate, Nils was followed not only by Ding but also  Rob, Dave (“however did I lead this myself in 1995?”) Shotton, and Geri.  Well done guys!    Glad you had good anchors up there Nils.    Or did everyone manage to stay on?

Finally Nils zipped up the well-polished Slab Recess Direct HS 4c – just as the rain started.   Ding had the good sense not to try to follow in the wet, and Nils abbed for the gear, becoming last man off the rock – watched by those coiling their ropes in the shelter of the trees.  As Nils himself said, a route too far.

Emily and Aleksandra distinguished themselves by walking in right past Froggatt and phoning from Curbar to ask someone to pop to the top of the crag and wave.  Dave S explained that unless they had a telescope this was unlikely to help, and issued words-of-one-syllable instructions instead.     They made it.  Then tackled Grey Slab S 4b, with Aleksandra eventually succeeding on the notorious crack and Dave W being called in to collect her gear.

Rob, Geri and Dave Shotton started with Rob leading the inevitable Heather Wall HVD 3c, moved on to North Climb HVD 4a led by Dave, also with a vast Friend, this one borrowed from Rob, then Sunset Crack HS 4b also led by Dave.  At this point the team got sidetracked by Nils’ offer of a toprope on 3 Pebble Slab….. then the big black scary clouds came over.….

Lester and Roger had a bumbling-around-at-the-crag day, as befits retired gentlemen.     Lester set off up Heather Wall HVD 3c, but after the seventeenth attempt at the hard initial move peeled off just above his second runner, lifting Roger into the air and embedding the runner so well that it needed all Jim’s strength to extract it.

Eventually reaching the main crack by a technique known only to old Froggatt hands, Lester made it to the top with no problem and Roger followed.  Lester decided Sunset Crack HS 4b was next on his list (you like routes with hard initial moves, Lester?) but with 2 parties queuing below with their eye on the route he generously came down from the start and transferred to Slab and Crack D 2m away.

This also proved intractable, so we retired for a leisurely lunch – after a chat with Steve & Helen Swygart, KMC members 15-20 years ago, now living near Llandegla.    Good to see you again guys! – and to see you’re still climbing hard as ever.

Having warmed up on Green Gut, Cathy decided it was time to give 14 year old Paul an outing on real rock and led off up Gamma VD.     A confirmed soccer enthusiast, Paul was having none of this so Roger zipped up and collected the gear.

At this point Jim decided that Roger was getting away with a very quiet day, and led Trapeze Direct HS 4c, using both knees on the crux.  Clearly a man who has done it before.  Roger demonstrated that now he has got his weight down to 64kg he has no problem with strenuous 4c moves as long as there is 63kg of tension in the top rope.

Now the drizzle started – throw ropes down crag, scoot to bottom, drag ropes into the trees and get sorted out in the dry.  You can’t do this at Stanage!

Off to the Grouse for a mug of tea – end of a grand day.

Had fun in the Alps?  Now treat yourself to a day with a lazy start, a horizontal walk-in, superb rock, and trees to protect you from the sunshine...

Plenty of parking in the National Trust’s Haywood Pay+Display car park just off the A625, 400m S of the Grouse Inn.  Free if you put your NT Membership card behind the windscreen.

Or if it is absolutely tipping down, 5 mins to the bar of the Grouse - and don’t panic, the crag dries quickly after a shower and indeed after heavy rain.

Just for once I’ll have a mobile with me.

Something for everyone here – twenty routes at Severe and below, some superb HS’s, several days’ climbing at VS and above:  and classics at all standards.

Six of the top 50 routes in Eastern Grit are here.

Scene of several of my minor triumphs, of one or two exciting moments, and lots of fun.

Plenty of trees to give shelter from the sun, and it’s child- and dog-friendly too.

Sample the well-protected delight of Sunset Crack HS 4b, or the unprotected thrill of Sunset Slab HVS 4b.  The juggy delight of the steep Terrace Crack, another HS 4b.    Or take a rest anywhere on the classic VD, Heather Wall.

Entertain the crowd as you struggle to gain the slab of Tody’s Wall HVS 5a (guess why we’re meeting there?) or test your nerve on Three Pebble Slab – another classic HVS 5a, with a KMC story behind it.

To the right of Diamond Crack, Broken Crack VS 5a demands better jamming or a good first-aid kit.

Further right still Sickle Buttress S 4a only needs one jam to get started, but does need confidence in friction on the little curved ramp that prompted its name, and careful thought to leave the comfortable ledge at the top of the ramp.   It may only be Severe, but the route is far more polished below the ramp than above it…

Lovely open climbing with delicate moves on Allen’s Slab S 4a:  in contrast, two athletic moves get you up Trapeze Direct HS 4c.  Or traverse right for Trapeze itself – the popular VD, well-protected at the top only if you are clever enough.

Toward the RH end of the Edge is “arguably the best line on the crag” which our own Nat Allen and Bowdon Black dug out of the ferns in 1948:  Green Gut HS 4a.

Further right, a good collection of strenuous high E numbers (more Elastoplast) then a final classic – the delightful Chequers Buttress, HVS 5a, which gets my vote as the best route on the crag.  I always used to fall off the move onto the arête.  I doubt if I can get that far these days, but I'm sure you will.

Now, before we go home, there are the Froggatt boulders… 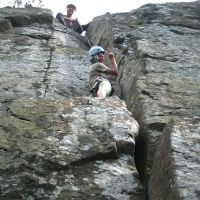 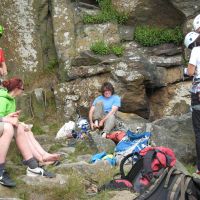 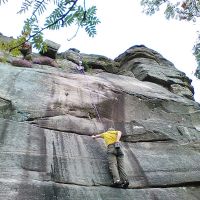 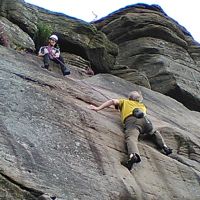