As the weather forecast was dire – heavy rain, high winds etc. etc.  I did not actually expect anyone to turn up at the Whalley Bridge canal basin to start the walk.

But in the forecasted rain, lo and behold two members did.  They were rewarded as during the day the rain stopped and the sun popped out becoming very pleasant.

Due to the wind we opted for a lower route and did a loop, up one side of the valley and back down the other.  Stopping at one of Andy’s old haunts in Goytsclough quarry from the days when he was a raver.  13 miles in all.

Iain worked out a shorter route from Pym Chair but we didn’t actually bump into him.

A walk on the western side of the Goyt valley

The route then runs the whole length of the of the ridge to the west of the Goyt Valley - reaching Shining Tor via Windgather and Cats Tor.

Then east droping down to the Goyt Value at Goytsclough Quarry.  We will cross the river via the footbridge at that location and then head back north up the valley on the east side of the Goyt - via Bunsal Cob and the Fernilee Resevoir until we reach Taxal.  There we will corss the river again and head back into Whalley Bridge via footpaths. 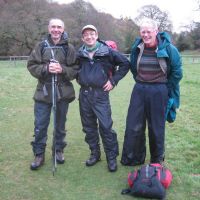