Fear not, the Cuillin ridge has not been retro-bolted! The slightly confusing title relates to the somewhat muddled meet that happened. The planned and advertised week had been on Skye, but with very limited interest from the club, Lucie and I decided we'd prefer to spend the time sport climbing instead. A quick check with the President and Outdoor Meets Secretary, and the change in plan was official: sport climbing local(ish) to Manchester with venues announced on Scribble day-by-day.

The first weekend of the week already had an advertised Scribble meet; rather than interfere with that, we started the sport climbing on Monday 18th. Dave Wylie had expressed interest in joining us at Horseshoe Quarry, so that was the venue for Monday. Unfortunately Monday had other plans, and threw it down with rain. No climbing done.

Tuesday was equally wet. I had a quick session at Awesome Walls Stockport, but no "proper" climbing.

Wednesday saw fantastic weather, and rather than seek out a sport crag, we opted to attend the mid-week trad venue, Cow's Mouth Quarry. Lucie Crouch, Dave Wylie, Bron Edwards and myself arrived early enough in the day to make it more than just an evening meet. Plenty of others came along for the evening, and there is a fine write-up (from Dan O'Brien) in the mid-week section of the club website.

Thursday was another good day, and we opted for the A55 sport crag of Penmean Head. Lucie Crouch, Dave Wylie, Helen Boothman and myself attended, with each of the following routes seeing a KMC ascent: Tan y Lan Kids (F5), Big Up the Lizard (F5+), Flowstone Shuffle (F6b+), Blitzy's Jug (F6a+), Broken Blackbird (F5), Steak Slice (F5) and Scared Shipless (F6a/+). Of the routes I climbed, Flowstone Shuffle stood out as the best, with the bottom half of the route being on wildly featured limestone: massive holds (once you found them!) which were jugs to hold, once the body was in the right position to load them in the right direction. If only it had continued for a lot longer! Dave, Lucie and I headed to Ty Powdwr on Thursday night, joined later that evening by Bron Edwards.

Friday was a day of mixed weather. We opted for Anglesey in the hopes of fairer weather, aiming to climb on the bolted limestone sea cliffs at Benllech. A couple of errors ensued, such as parking in the wrong car park, and paying for parking before realising the error. This meant an extra 2km of walk in, and approaching the crag from the opposite direction than the guidebook suggests, making identifying the crags tricky. After lunch in the rain, we found the Angler's Zawn crag. The plan had been to climb on the upper tier (non-tidal) whilst the tide was in, but the approach looked so slimy and unappealing that we didn't bother. The lower tier, our original target for later in the day once the tide was out, was still being lapped by the waves, the first(?) bolts visible a few inches above the water. For the sake of getting something done, we were each in turn lowered down Drum Solo (F5+) to the water level. We then "deep water top-roped" back up, so climbing the upper two-thirds of the route, which was wet and slimy. The crag would certainly be worth returning to on a sunny, dry day, at low tide.

On Friday evening, members began to arrive at Ty Powdwr for the bank holiday weekend meet (which had been re-arranged from Cornwall), and the exploits from the three day weekend will no doubt feature in the report for that meet.

Lucie and I have now decided to use this week to enjoy some local sport climbing. Peak District, Yorkshire, North Wales, depending on weather and preference. We'll make day-trips from Manchester for the first part of the week, and aim to head to Ty Powdwr towards the end of the week, staying on there for the bank holiday weekend.

We'll post on the Scribble page where we head each day. Members are very welcome to join us for a day or more of sport climbing. If there's somewhere you'd particularly like to go, feel free to get in touch and suggest it.

As there has been extremely limited interest in this meet it's been decided to cancel the meet and replace it with an alternative, most likely involving sport climbing so that a small number of attendees can all find climbs to suit their interests, rather than having to accompany each other on longer mountain days where it can be hard to find routes of interest to all.

I will post more details here once a replacement venue is decided upon.

This week-long meet includes a bank holiday weekend meaning KMC members could come for the full week or just a long weekend (though the meet leader plans to travel home on Sunday 24th to avoid bank holiday traffic). Please make your own accommodation arrangements. The meet leader will be based at the Glenbrittle campsite (midge nets advised).

The Isle of Skye offers some of the most spectacular peaks in the UK.

The awesome Black Cuillin mountains provide the best scrambling to be found anywhere -- and include the Inaccessible Pinnacle, the only Munro summit requiring the bagger to climb to earn their tick (Mod *** but with harder options too). For those who prefer to walk to their summits, the Red Cuillin hills are your best bet, with thrilling views across to the Black Cuillin.

The massive face of Sron na Ciche, home to the famous Cioch, is within easy reach of the Glenbrittle campsite and covered in top quality, classic multi-pitch routes from Moderate upwards. For a longer day out, why not walk around to Loch Coruisk and tackle the Dubh slabs, taking in about 900 vertical metres of Moderate ***? If exposure is your thing, have a go at Naismith's Route on the Bhasteir Tooth (V Diff ***).

Skye has a reputation for bad weather, but when the Cuillins are covered in clag, the coast is the place to go. Plenty of grand walking, and also some superb sea-cliffs to climb on. These are often dry when the higher mountains are dripping, and well worth a visit in their own right.

There's also plenty of interesting walking to be done in the less popular northern parts of Skye, notably Trotternish. Raasay is often sheltered by Skye too.

(1) a traverse of the main Cuillin Ridge in a day.

(3) the possibility of breaking the journey at Fort William to tackle The Long Climb (VS 4c ***) on the North Face of Ben Nevis, 11 pitches described by the SMC Guide as "An outstanding route of alpine proportions".

(5) the unique Spantastic (HVS) at Flodigarry.

The list goes on.... please come along, and bring your own wish-list too! Please contact Gareth Williams (details in the Club Handbook) if you are interested in coming. 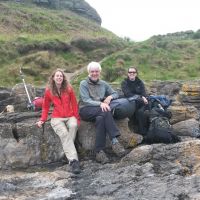